How much can Mariano Rivera have left? 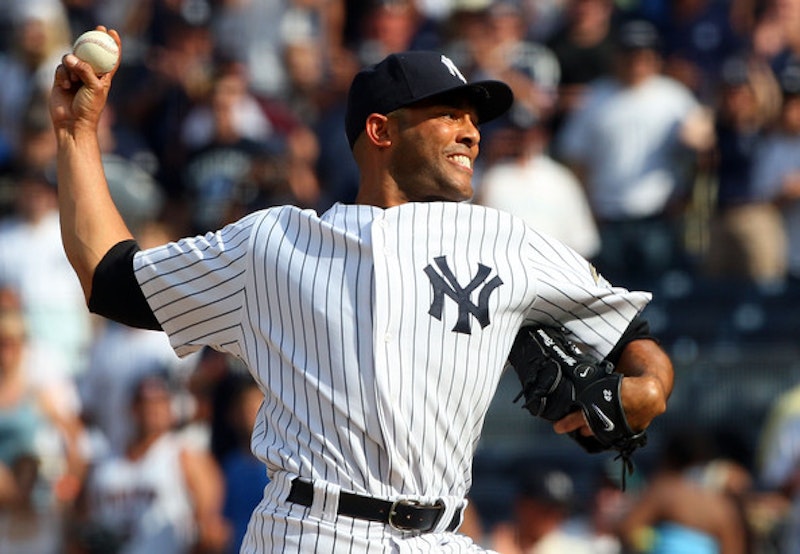 Yankees closer/Terminator clone Mariano Rivera made his 2011 spring training debut a few days ago, striking out the side in a game against the Minnesota Twins by throwing nine strikes in 12 pitches.

Just another day for Rivera, who’s amassed 557 saves for the Yankees since 1996—and that’s not counting his career post-season numbers: 42 saves and a 0.71 ERA in 94 games.

There are many baseball theorists who posit Rivera as the team’s true MVP; after all, the Yankees have won World Series without Alex Rodriguez, Mark Teixeira and CC Sabathia, but with no Mo? Unthinkable.

Rivera also benefits from being a genuine object of envious affection for opposing fans, for the most part. Red Sox boosters may gleefully point out Derek Jeter’s waning skills—and they’ll rightfully never get over being left at the altar by Rodriguez—but Rivera’s a different story. (The Sox even reportedly reached out to Rivera during his contract negotiations this winter with the Yankees, though no one seriously thought No. 42 would end up in Boston, or anywhere else than The Bronx.)

There are, rightly or wrongly, precious few relief pitchers in baseball’s Hall of Fame, but most people figure Rivera’s a first ballot shoo-in … should he ever actually leave the game, of course. This is a 41-year-old man entering his 16th Major League season and showing very few signs of slowing down.

And Rivera’s been dominant for almost that entire time. No lumbering along with an endless procession of teams, slowly adding stats like Lee Smith or Billy Wagner. No flash-in-the-pan, a couple of great seasons followed by years of mediocrity before fading away, a la Billy Koch, J.J. Putz or Eric Gagne (or even, Red Sox fans gulp, Jonathan Papelbon?).

Gagne, of course, is a special case. Even more than Roger Clemens—at least until/unless the Rocket’s steroids trial finally gets underway—Gagne stands as the poster child for PED pitchers, his streak of 84 consecutive converted save chances finally revealed to be superhuman, in all respects, by the Mitchell Report.

I confess that I’ve wondered if Mo hasn’t had occasion over his lengthy career to dip into the pharmaceuticals at times as well; after all, not all banned substances result in Mark McGwire’s puffed-up physique, as Jason Grimsley could tell you.

Still, the real giveaway on the steroids front always seems to be the frequent injuries that such extracurricular activities tend to bring about once the user stops using: McGwire, Sammy Sosa, Barry Bonds and the like all seemed to suddenly come down with an array of boo-boos once the heat got turned up and the drugs had to go away. But while Rivera’s had his stints on the DL, they’ve been mostly short … and he is, after all, 41.

If we can accept that Rivera’s clean, then we’re simply in the presence of a once-in-a-fan’s-lifetime run. He doesn’t say a whole lot, doesn’t seem intent on bleeding his team dry financially (Jeter probably could have learned a lesson there), and hasn’t shown many doubts as to whether he should keep going.

I was somewhat surprised when Andy Pettitte decided to hang it up this year, but then Pettitte probably looked at the rest of the Yankees rotation and thought, why bother? Being a talented but aging starting pitcher for a probable third-place team isn’t an attractive proposition, but being the lights-out closer for that same team can still be a thrill—even if your arrival on the field is still accompanied by the hoary strains of “Enter Sandman.”

I’ve been waiting for Rivera to implode for nearly a decade now; after all, every closer does, eventually. But whenever he’s blown a key save—none more painful than in the last game of the 2001 World Series—he’s always come back and returned to business as usual.

“He can still do it three, four, five years,” estimated Rivera’s longtime battery partner, Jorge Posada, after that spring training game. “He has the same body since 1991. He is probably a little thicker, but he has probably put on five pounds. He is very unique.”

In the same piece, Rivera admitted that his fastball is no longer regularly capable of hitting 95-96, meaning he’s had to focus more on precision. “As you get older, you get wiser,” he said.

For what promises to be a long season in The Bronx, such wisdom should be cherished.