Contending again in the N.L. Central won’t be easy. 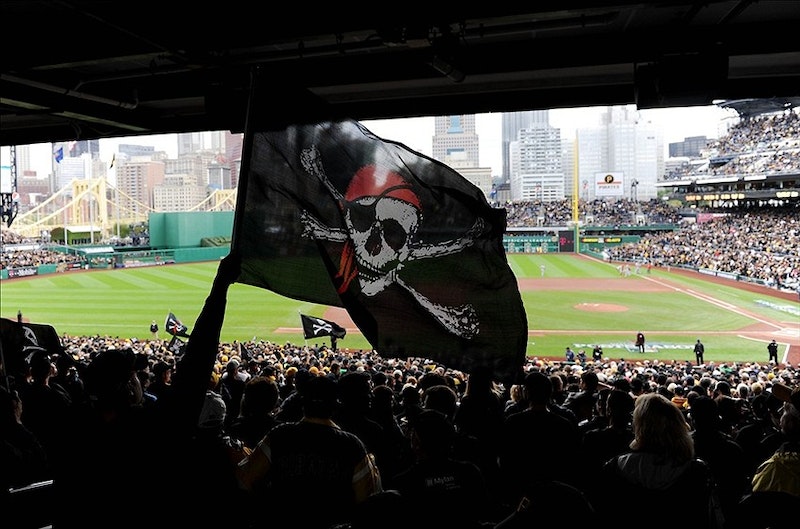 Chris Stewart and Edinson Volquez. That’s it. Stewart and Volquez represent the entirety of the Pittsburgh Pirates offseason maneuvering.

While the Baltimore Orioles have been correctly lambasted for their failures to address the club’s weaknesses this winter, the Pirates get a pass. Pittsburgh made the playoffs last season for the first time since 1992 and have spent the winter sitting on their hands. The club was propelled to October by the strong play of National League MVP Andrew McCutcheon, slugging third baseman Pedro Alvarez, and a deep and talented young pitching staff. The core of last season’s Wild Card team remains intact but manager Clint Hurdle will be looking at internal candidates to replace several key veterans lost to free agency.

The biggest loss the Pirates suffered was A.J. Burnett’s departure to Philadelphia. After toying with the notion of retirement the 37-year-old right-hander decided to play closer to his suburban Maryland home, for the handsome sum of $16 million, and will join Cliff Lee and Cole Hamels in the Phillies’ rotation. The Pirates reportedly didn’t come close to matching the Phillies’ offer and will rely on Volquez to fill out the rotation in the season’s first few months. Burnett posted a 3.30 ERA and 1.22 WHIP in 30 starts for the Pirates last season. By contrast, Volquez led the National League in earned runs allowed while posting a 5.71 ERA in 32 starts for the Padres and Dodgers. Volquez may ultimately be supplanted by top pitching prospect Jameson Taillon. The 22-year-old Taillon struck out 143 batters in 147 innings between Double-A and Triple-A last season amassing a 3.73 ERA in 25 starts. The Pirates are hoping Taillon can be their 2014 version of Gerrit Cole.

Pittsburgh also lost outfielder Marlon Byrd to the Phillies ($16 million/two years) in free agency. Byrd was a valuable addition to Hurdle’s lineup after a late season trade with the Mets. He posted a .843 OPS and drove in 17 runs in 30 games with the Pirates. Pittsburgh was unable to replace Byrd’s right-handed power during the offseason and may go into the season looking to add some thunder to the lineup.

The Pirates lost a pair of first basemen, Garrett Jones and Justin Mourneau, to free agency. Jones signed with the Marlins after several successful seasons in Pittsburgh. Mourneau, who was generally ineffective during his brief time in Pittsburgh, will try to replace Todd Helton at first base for the Colorado Rockies. The loss of Jones, coupled with Byrd’s departure, could result in a serious power outage in the Steel City. The Pirates did acquire minor first baseman Chris McGuiness from the Texas Rangers in a December trade. McGuiness hit .246 with 11 home runs and 63 RBIs for the Rangers Triple-A affiliate last season. The 25-year-old is expected to provide a left handed platoon partner for Gabby Sanchez at first base. A Sanchez/McGuiness platoon won’t make anyone forget about Willie Stargell.

The Pirates do have one of the top rated outfield prospects in the minor leagues. Gregory Polanco has had praise heaped upon him from all corners of the scouting world this winter. Polanco is expected to be an impact multi-tool player in the big leagues. The 22-year-old Dominican has played just 70 games above Class A ball and may be hard pressed to make the jump to Pittsburgh this summer.

The losses of Byrd, Jones, and Burnett aren’t insurmountable for a team with a rich crop of talented prospects, but Stewart and Volquez is a rather pathetic encore to a season filled with such promise and hope. The Pirates will hope for the continued progression of players like McCutcheon, Cole, Alvarez, and a bevy of talented prospects. If the likes of Taillon and Polanco can make an impact on the NL Central race in 2014 the front office’s winter slumber will be forgiven, but a few injuries or delayed development could have Pittsburgh fans asking “What if?” come October.