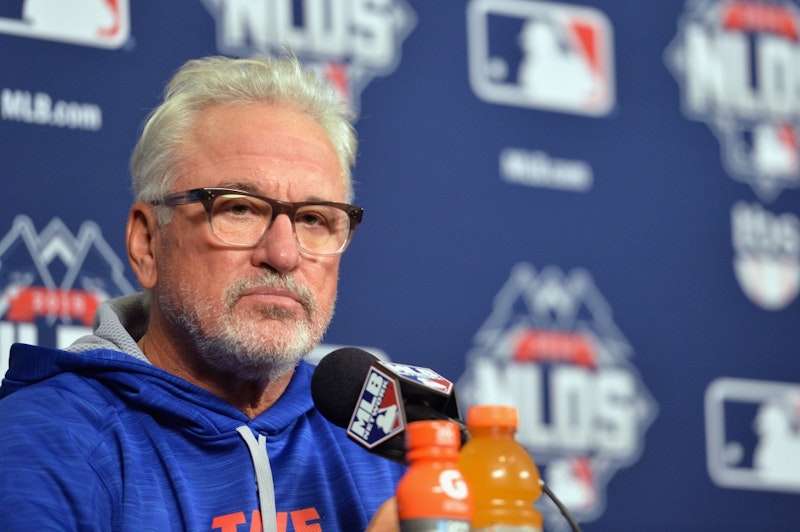 Outside the New York metropolitan area, I’m betting most American baseball fans are pulling for the Chicago Cubs to rally from a two-game deficit and emphatically send the Mets back to Queens. You know the story: no World Series win since 1908, the Billy Goat curse—apocryphal, I think, aping the Red Sox’s legit “Curse of the Bambino”—Steve Bartman, the 1969 collapse, and of course, the “national treasure” known as Wrigley Field. (I’ll admit Wrigley’s a great place to see a ballgame, providing you have primo seats; otherwise, like Fenway Park, the place is a dump.)

My take: Meet the Mets! Before I alienate friends and strangers any further, a few caveats: one, as a Red Sox fan (and still steamed over another last-place finish), by far the most important piece of business this year was accomplished by the Astros decking the Yankees in the wild-card game. Had the Yankees advanced in the playoffs, my tsouris would be off the charts. Second, how spectacular would it be for the Mets to win the Series (although I do like the Royals, fun team to watch), and rub it in the noses of all Yankees fans? I’ve no animus against the Mets for the ’86 Series debacle: as agonizing as it was at the time, 2004 erased the blunders of Red Sox manager John McNamara and Bob Stanley.

And, truth be told, had the Cubs been in this position in, say, 2011, I’d be in their corner. But today, there are two reasons I hope the Chicagoans get bumped (and I won’t even include the inevitable George Will column that’ll celebrate his team, and, at the same time, wax melancholy over forfeiting the tag of the “lovable losers”). First, there’s the insufferable manager Joe Maddon—also known as “Genius Joe,” “Artisanal Joe” and, lately, “Williamsburg Joe,” since he’s about the hippest sexagenarian alive. Black-rimmed glasses! Listens to Kanye! Maddon—who riled me enough when he managed the hated Tampa Bay Rays—has been canonized in the media, portrayed as the sparkplug who’s masterminded the Cubs’ success this year, as if he had anything to do with the scouting and shrewd player acquisitions the front office accomplished before he set foot in Wrigley last April. He’s the juice, man, the fucking Energizer Bunny who sets the table every game, willing the team to success. As my son Booker insists—and I believe he’s right—managers are overrated, and in most cases a hobo off the street could do just as well. All the action is in the front office. If the Cubs do snuff the Mets, and go on the win the Series, Maddon will be the early favorite for Time’s mostly-ignored “Person of the Year.”

Second, I’m ticked off that Theo Epstein, Chicago’s president of baseball operations, left the Red Sox after the collapse of 2011 and bailed to the Cubs. The Sox’s owner overreacted—most egregiously in treating manager Terry Francona like dirt, reprised this summer by firing popular NESN broadcaster Don Orsillo—and Epstein wanted to leave that dark cloud behind. But here’s the problem: if Epstein is successful this year in hoisting a World Series trophy, he’ll be an instant Cooperstown lock, for breaking two curses in 11 years. Too soon!

Booker and I rarely disagree about whom to root for—we have generational squabbles over sabermetrics and taking the long or short view of a team’s development—but in the NLCS he’s rooting for the Cubs because of a deep antipathy for Mets GM Sandy Alderson, a man he considers a detrimental old-school baseball relic, one who’s impossible to do business with. I counter that Alderson is hamstrung because of the Mets ownership’s financial problems, but he waves me off. (By the way, why the Wilpons won’t sell the Mets for an astronomical sum, say $3 billion, is beyond me.)

That’s it. Right now, I feel like a goose on the loose, honking at everything that moves. Let’s conclude by my hope that the Mets’ Jacob deGrom throws a perfect game at Wrigley tomorrow night.