Says Matt Barnes is almost as bad as Ray Rice. 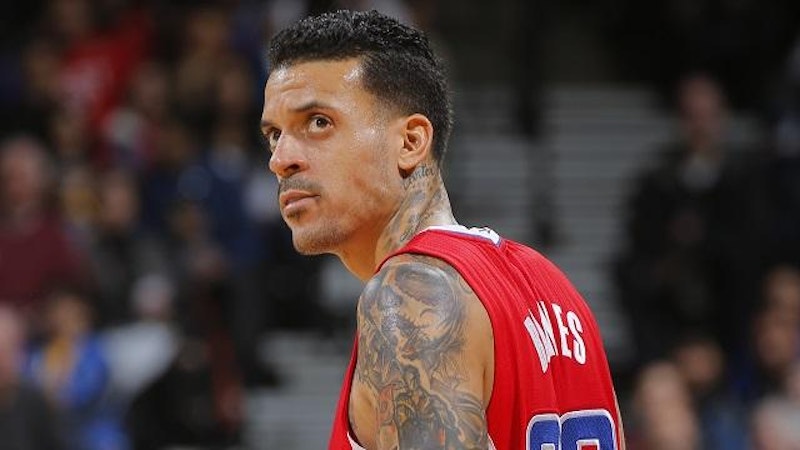 NBA player Matt Barnes reportedly drove 95 miles to LA to physically confront his former teammate, current New York Knicks coach Derek Fisher, on Wednesday. Fisher's offense was being at the home of Barnes' estranged wife for a social function. Barnes ended up punching Fisher in the face, which was no great surprise to those who have followed his career. Media reports indicated that Barnes felt Fisher was betraying him by moving in on his ex, Gloria Govan.

Albert Burneko, writing for Deadspin, then posted a piece—Matt Barnes Terrorizes Ex, Amusing Sports Writers—that set the stage for the latest iteration of the Twitter outrage machine. As the title of his article indicates, Burneko was unhappy that some sportswriters on Twitter didn’t find this incident serious—didn’t see misogyny—and he called several of them out on the carpet.

The first to get it was ESPN's Arash Markazi, who tweeted: "Driving 95 miles to beat somebody up is pretty low on the crazy things he's done." Burneko's response: "Yeah, invading the home of the woman on whose body he once left 'visible injuries' to attack another man for dating her is almost as zany as the time he lied about dating Rihanna! What a knucklehead. SMH." Notice that Burneko changed "crazy" to "zany," though in this case they are not synonyms. I doubt that Markazi meant to portray Barnes' actions as "madcap" crazy.

Chris Herring, who writes about sports for The Wall Street Journal, got shamed too. Burneko describes him as a "genuine favorite around these parts," whatever that means. Herring's mistake was tweeting that "dating a teammate's ex is debatable/borderline at best," which Burneko interpreted as implying that Fisher was wrongly "tread[ing] on another man’s turf.

This Deadspin piece focuses on Barnes attacking Fisher for violating his territorial rights, but that’s only part of the story. Burneko doesn’t mention that Barnes and Fisher were once close when they were teammates on the Lakers, which adds another dynamic. The writer characterizes the attack as "a man forcefully asserting personal property rights over a woman’s home." This would imply that Barnes would’ve reacted the same way if the man who was dating his ex—the man in the house that night—had been someone other than Derek Fisher, although I see no supporting evidence. Burneko writes that a "woman's unhinged stalker ex believes he’s still entitled to total control of her private life more than a year after their separation," which is hyperbole. Total?

Few people would react positively to an ex dating someone they are, or used to be, close to. The "why" of this I'll leave to others, but Matt Barnes is no exception to this axiom. Add on that Matt Barnes is a hot-headed man prone to violence, which he’s demonstrated both on and off the basketball court. With this in mind, it’s easy to envision a scenario where Barnes was not attempting to completely control Govan's life, but rather reacting in a fit of rage against someone he perceives as violating his "bro code," which may be shaped by certain understood unwritten NBA rules—rules that tend to exist in all of sports.

I’m not defending Matt Barnes. I don't even like the guy, and he was obviously wrong to assault Fisher. His ex can date whomever she chooses, and shouldn’t be terrorized. What I object to is Burneko's attempt to gin up outrage over sportswriters failing to instantly discern that this incident was another attempt by the patriarchy to assert its dominion over women. These are sportswriters, after all, not Salon contributors who are finely attuned to the nuances of modern feminist polemic.

Burneko goes off the cliff with his final, overwrought sentence, where he states that Barnes punching Fisher "differs from what Ray Rice did in that elevator by degree, not by kind, and not by all that much. It is not fucking funny." It’s not “fucking funny,” but Rice knocked his wife out cold in that elevator, and then dragged her out of it. Here's the video. Not by much? Come on, man, who got punched this time?