No other AL player comes close. 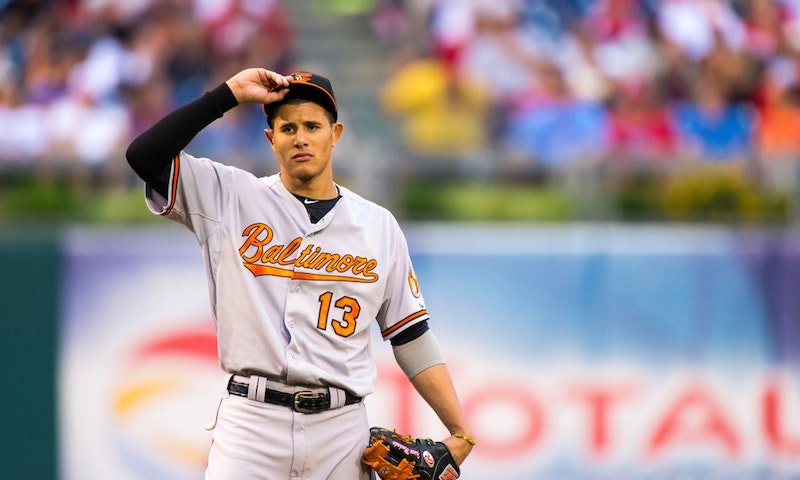 The American League was filled with impressive comeback stories this season, some more revolting than inspiring. The early returns suggested that Alex Rodriguez, the Yankees’ 40-year-old DH and narcissist, was a contender for the AL’s Comeback Player of the Year, but A-Rod’s production wilted in the late summer. The Orioles’ Manny Machado was consistently excellent in a frustrating season for Baltimore.

Machado’s 2014 season was ruined by injury, derailed before it could start and then ended prematurely. The knee injury he suffered during the last week of the 2013 season kept him out of the Orioles’ lineup until May of 2014. He failed to replicate his prior offensive performance but still excelled on defense. As the O’s were surging to the top of the AL East standings, Machado suffered another devastating injury, this time to his other knee. The Orioles advanced to the ALCS with Ryan Flaherty serving as a daily reminder of Machado’s absence.

Machado returned in time for Opening Day. He played every game for the Orioles in 2015, led the American League in plate appearances, and embarked on a MVP caliber season. The only thing standing between Machado and serious MVP chatter was the Orioles unremarkable starting pitching and the presence of Mike Trout and Josh Donaldson. The 23-year-old Machado posted career highs in nearly every major offensive category including on-base percentage, slugging percentage, home runs, runs, stolen bases and walks. He continued to play highlight reel defense at third base.

Some of Machado’s daily excellence was overshadowed by the late-season power of teammate Chris Davis. After slumping badly in 2014, and missing the last 24 games of the season and postseason for violating MLB’s drug policy, Davis returned to the O’s lineup and led MLB with 47 homers. The free agent could be considered the league’s premier comeback story if not for the fact that his downfall was self-inflicted.

The Texas Rangers are the American League’s best comeback team, though no individual player can match Machado’s return. Prince Fielder was a bust in his first season with the Rangers in 2014. The former Tigers’ star missed most of that season after having fusion surgery to repair a herniated disk. Fielder returned this season to play 158 games and post an OPS of .841 for the first place-Rangers.

Royals fans may push for Kansas City designated hitter Kendrys Morales for Comeback Player honors. Morales did post impressive numbers in his first season with the Royals as he slammed 22 home runs and knocked in 106 with a .847 OPS. Those stats are a major improvement over 2014 for Morales when, as a member of the Twins and Mariners, he posted a .612 OPS with eight home runs in 98 games. Morales was certainly one of the league’s most improved players, but he doesn’t deserve the Comeback citation.

Machado is a budding superstar for the Orioles and his stunning return is the American League’s most notable comeback. Orioles fans will spend the next several months fretting over the impending departure of Chris Davis. Losing the league’s home run king for a second straight offseason will be a bitter pill for Baltimore but re-directing Davis’s would-be millions into a long-term deal for Machado is the better investment.