Why I Love Football and Hate the NFL

It's corrupt and brutal. 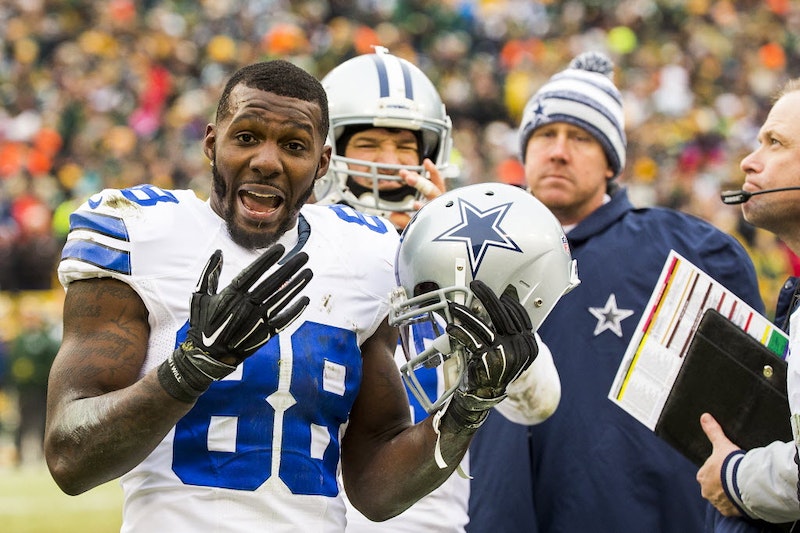 I watch NFL football because I’m addicted to it. I dislike the NFL front office, especially Commissioner Roger Goodell, many team managements, and a lot of the players. The league has us hooked, they know it, so nothing will change inside the greatest American sports money machine of them all.

I'll start with the Dallas Cowboys sack-artist Greg Hardy. He just completed a four-game suspension for—what else?—domestic abuse, for which he was convicted. During the trial, his girlfriend testified that he picked her up over his head and threw her on a couch full of assault weapons and shotguns, which Hardy told her were loaded. Finally allowed back in the Cowboys facility in October, he weirdly opted to tell a reporter on his first day back that he was looking forward to seeing New England Patriots quarterback Tom Brady's wife at the upcoming game. I doubt the feeling was mutual.

Why do the Cowboys retain such a violent, arrogant individual? Because he has the ability to tackle the opposing quarterback before he can throw the ball, a rare and highly valued skill in the NFL. Cowboys owner Jerry Jones would sell his soul to the devil (if he already hasn't) to win another NFL championship, so he allows a common criminal like Hardy on his team. A quick look at the record of all Cowboys arrested since 2000 will demonstrate Jones’ commitment to winning at all costs.

Singling out Greg Hardy out isn’t completely fair, though he’s one of the worst. A total of 93 NFL players have been arrested since 2000 on domestic abuse charges, a fact that apparently doesn't alarm Goodell, who demonstrated his lack of concern how concerned when Ravens running back Ray Rice knocked his wife out in a casino elevator in February of last year. Goodell initially handed Rice a two-game suspension.

Goodell has provided plenty more fodder for his legions of detractors by handing down some ridiculous player penalties. He fined Pittsburgh Steelers’ Cameron Heyward for having a "personal message" in his eye black. That message was "Ironhead Heyward," in tribute to his father, the deceased NFL star. Goodell has also fined Steelers running back DeAngelo Williams twice for wearing pink spikes to commemorate the deaths his of mother and four of his aunts to breast cancer.

This is the same man who fined Troy Polamalu $10,000 in 2011 for using a cellphone on the sidelines, which isn’t allowed. Polamalu had suffered a concussion, and called his wife to let her know that he was okay. Being out on the field and putting your brain in danger to improve the NFL "product" isn’t enough for Goodell, who gets paid more than $20 million a year to work in an office.

And I’m disgusted with the management of my own team, the San Francisco 49ers, after it’s allowed a championship-caliber team to slide into mediocrity. They made the smart decision of hiring Jim Harbaugh, who took a team that had underperformed for years to the NFC championship in his first season. The next season he took the Niners to the Super Bowl, and in his third season, 2013, back to the NFC championship game. It looked like the foundation for years of great football, but the front office couldn't get along with their winning coach, and suddenly he was gone. The 49ers are currently 2-4.

I have to admit, as much as I like watching football, there’s something unseemly about the game. Anyone who’s lived in a college town and seen a bunch of football players enter an establishment in the evening will know what I mean. The best advice I can give is to leave immediately. You'll have no problems with the tennis team, swimmers, or baseball players, but football players (lacrosse too) there are no such guarantees.

But I'll keep watching football, regardless of the bad taste it often leaves in my mouth. Still, I refuse to support the NFL financially. Billionaire team owners who pressure the public to finance their stadiums aren't getting my money. Of the hundreds of NFL football games I’ve seen, only two of them have been at the actual stadium. Who needs to pay a lot of money to be surrounded by stupid-acting drunks when it's a better viewing experience on TV? I've never spent a penny on NFL merchandise. Seeing grown men walk around in team jerseys with the name of their favorite player on their backs is embarrassing.

I resolved to not watch any football a couple of Sundays ago, and was confident I could remain strong, especially since my team appeared certain to lose, but game time rolled around and I found myself back in the sports bar.