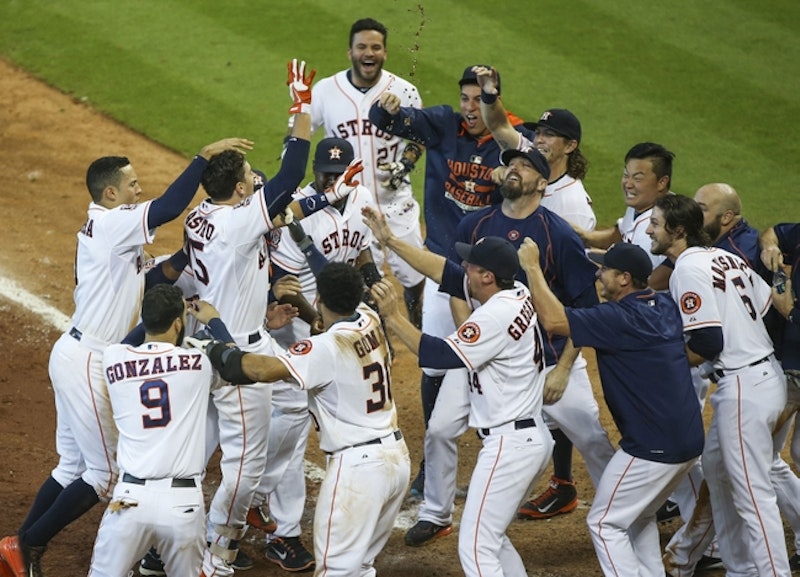 They had Jose Altuve, the best 5' 4" second baseman in the history of baseball and the finest horshoe-tosser in all the land.

They genuinely seemed to enjoy each other, as evidenced by every postseason homerun celebration/dance party.

With all of those losses, they smartly drafted prospects George Springer, Altuve, and Carlos Correa.

They made the postseason on the final day of the season... by losing their final game.

They weren't supposed to be this good yet.

They had Carlos Correa, who plays more like a 31-year-old than a 21-year-old, moving runners over when needed, remaining focused and emotionally balanced as if he's been doing this forever. One wonders if Correa, within minutes of being born, decided he would dry himself off, stop fussing, and sit patiently for the next assignment.

They beat the Yankees in the Wild-Card game... in New York.

They have a pitcher named Dallas Keuchel with a beard that would fit in nicely with the gentlemen from ZZ Top, and with pitching command that rivals anyone pitching today.

They have relievers named Sipp and Gregerson, which makes me think of taking a sip of Gregerson.

They have a stoic first baseman, with the same name as the guy who created the X-Files, who was benched earlier in the season, who has struggled to hit singles for all of his career, but hits home runs with seeming ease.

The Astros were up two games to one, with a 6-2 lead heading into the eighth inning on Monday night. Six outs away from continuing their storybook 2015 climb out of obscurity and into the American League Championship Series. Then the magic wore off. You never know when the magic will wear off. They gave up hit after hit in the eighth. Five straight singles all finding an infield opening or a soft landing spot out of reach of Astros gloves. Suddenly it was 7-6, Royals.

Last night, the Astros had a lead again, 2-0. But it's done now. The Royals will face the Blue Jays in an all-blue ALCS. The young Astros are done, but the future is so bright that sunglasses will be handed out with season tickets next year.