The Only Way the New XFL Can Work

It's all about competitive spending. 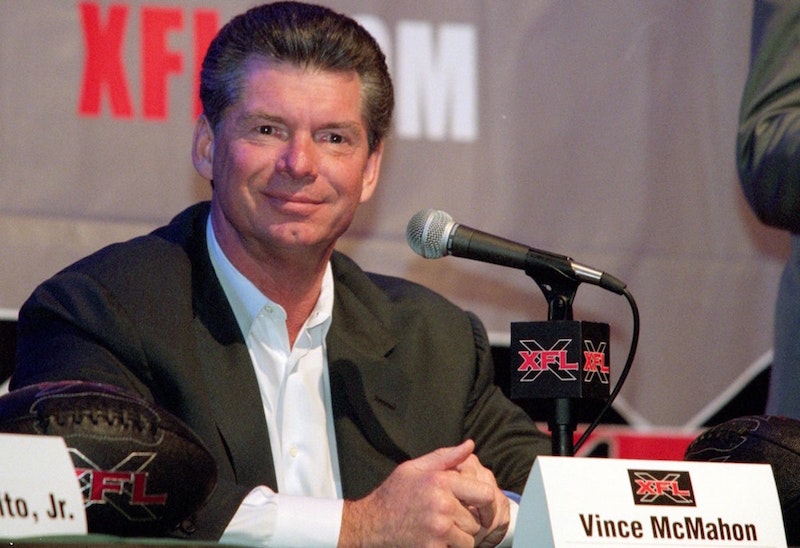 Almost exactly 17 years after the debut of the original, ill-fated XFL, and a year after an incongruously fawning ESPN 30 for 30 documentary about it, longtime WWE honcho Vince McMahon announced that his alternative football league will be revived, beginning in 2020.

McMahon’s press conference last week didn’t give away all or even most of the details of what XFL 2.0 will look like, sticking mostly to meaningless buzzwords like “give the game of football back to fans” and “it’s football re-imagined.” McMahon implied that he and his team use the long leadtime to figure out exactly what form the new league will take.

We do know that it’ll leave behind many of the aspects associated with the original league—cheerleaders, a focus on violence, and the all-around raunch primarily associated with the circa-2001 “attitude era” of WWE. Spying on cheerleaders in the locker room isn’t a fit with the #metoo age, while recent findings on CTE make it hard to market “smash mouth football” without opening yourself up to future class action suits. Whether the new league will allow nicknames on the back of jerseys, like the old “He Hate Me,” is unclear.

We also know that a lot of the rumors leading up to the announcement—that McMahon was appealing specifically to Trump supporters who have sworn off the NFL over the Colin Kaepernick protests—were overstated. While McMahon said he’d require players to stand for the National Anthem, the founder said that the new league “will have nothing to do with politics and nothing to do with social issues.” He appears savvy enough to realize that the anthem controversy—and Trumpism—is happening at a specific moment in history, one that may have passed by the time the XFL returns.

The original XFL was one of the great failures in the history of sports, something the soft-focus ESPN documentary—directed by the son of former top NBC sports exec Dick Ebersol—halfheartedly tried to rehabilitate. With the exception of some camera and TV production techniques later adopted by the NFL, the XFL is mostly remembered as a laughingstock.

But even so, the cheerleaders and “smash mouth” gimmicks weren’t the reasons for the quick collapse of the league: the biggest failure was that the football quality was so bad. It was subpar, minor league football, with mediocre players executing ancient, rudimentary offensive and defensive schemes. And there was a reason for that: unlike just about every upstart rival league in the history of sports with any sort of ambition—like the USFL, WFL, the ABA, and the WHL—the XFL made no attempt to steal players away from the incumbent league.

And that’s what the XFL should do, if it wants to succeed the second time around: sign NFL-caliber players, and make an effort to break the NFL’s existing monopoly. The XFL has a real opening here. That’s because the NFL, separate from every other sports league, doesn’t guarantee the majority of its contracts. It has a hard salary cap, and imposes stringent salary scales on rookies.

Suppose there’s a situation like this year, in which Josh Rosen, a top quarterback in the draft, has expressed that he would rather not play for the Cleveland Browns, the team that has the #1 pick. So why doesn’t the XFL, which is under no obligation to abide by the NFL’s Collective Bargaining Agreement, swoop in and offer Rosen—or the 2020 equivalent—more guaranteed money than the NFL would allow, as well as the chance to be the face of the league, and not have to play for Cleveland? And if that works, why not make similar offers to other rookies? Why not, say, allow college sophomores to play in the XFL, while the NFL Draft only allows juniors and seniors?

Imagine the XFL focusing on rookies in the first year, and then moving on to veterans in Year 2. Like the star NFL player who’s holding out of training camp, or has received the franchise tag but doesn’t want to return to his current team. Or the growing numbers of “middle class” players tossed off rosters. Everyone expects McMahon to bring in high-profile NFL castoffs like Tim Tebow and Johnny Manziel, but that won’t be enough. The XFL needs to step in with money the NFL isn’t willing to pay.

This approach would be expensive, and would require a lot more capitalization than the $100 million of WWE stock McMahon reportedly sold to fund his new venture. McMahon, with a history of lowball contracts and union-busting in his wrestling operation, hasn’t been known over the years for profligate spending on labor. But cheaping out on players would doom the XFL. McMahon’s going to have to pay for players. Cultural resentment alone won’t be enough.