The tennis champ defaults out of the U.S. Open. 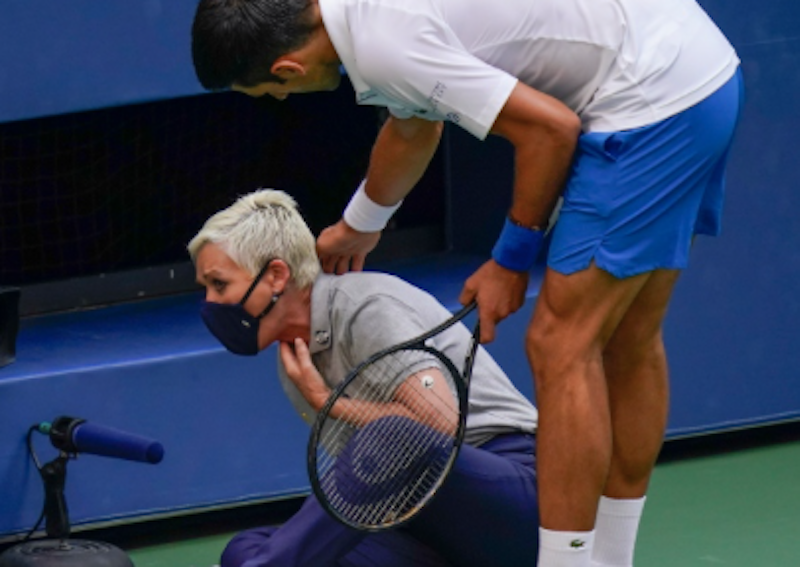 Novak Djokovic had just lost his serve in Arthur Ashe Stadium to his fourth-round opponent, Pablo Carreno Busta, in the first set of a fourth-round match at the U.S. Open tennis championship on Sunday in New York City. He was annoyed, but unaware that he was about to make the most consequential mistake of his career and blow his quest for an 18th major tennis title. The Serbian star, letting his anger get the best of him, carelessly hit a ball towards the back wall, hitting a line judge in the throat, and causing her to collapse in agony.

Tennis officials conferred immediately, with Djokovic pleading his case that it was an accident (it was), and that the lineswoman wouldn't have to go to the hospital, which was irrelevant. When they gave him the bad news, the overwhelming favorite to win the tournament (Roger Federer and Rafael Nadal sat this one out) took their decision without further argument or visible emotion. He shook hands with his opponent, packed his gear, and left the court. The world’s number one player had just defaulted his match and was out of the tournament. Djokovic’s elimination means that a Next Gen player is about to step into the spotlight. For the first time since 2014, the U.S. Open will have a first-time Grand Slam winner.

Djokovic obviously felt bad about hurting the woman, but it wasn't as if this incident was a one-off that was out of character for the champion. Earlier in the same match, he'd smashed a ball in anger and got lucky when it didn't hit a photographer and cause a serious injury.

Djokovic's emotions were spiralling after his disqualification, but there was one thing that he had to do before returning to his hotel to sulk. He had to make his obligatory post-match appearance before the media to make amends while the incident was still fresh. But Djokovic failed his second test of character of the day. Instead, he got in his car and slunk away, adding a $20,000 fine to the $250,000 in prize money he'd just forfeited, plus any additional fine that the USTA may levy against him. The apologetic tweet that soon followed, which could have been written by someone on his team, just didn't cut it.

It's hard to get disqualified from a men's professional tennis tournament. There have been just three high-profile defaults since 1963. The only comparable incident to this one was 30 years ago at the 1990 Australian Open when John McEnroe was defaulted from his fourth-round match for profane verbal abuse of officials. The player who'd go on to win seven major titles was in his "superbrat" stage at that point ("Answer my question! The question, jerk!"), terrorizing tournament officials and receiving code violations left and right. The disqualification in Melbourne was the moment he hit rock bottom.

Djokovic's default would normally be considered his nadir as well, except for what he's already done this year. During the stretch when all pro tennis was suspended due to the pandemic, he hosted his own mini-tour in the Balkans. Under his leadership, scant attention was paid to social distancing or any significant coronavirus protocols. Photos surfaced of Djokovic, who opposes a COVID-19 vaccine, partying in crowded clubs with other tennis players. Eventually four players, including Djokovic himself, would test positive for COVID-19. His wife also tested positive, as well as the pregnant wife of tour player Victor Troicki.

When the withering media attention came, Djokovic was initially defiant, calling it a "witch hunt." "I can only see criticism lately and much of it is malicious," Djokovic told the Serbian newspaper, Sportski. Eventually, though, he relented, saying he was "deeply sorry" for his irresponsible actions.

When Serena Williams had her meltdown at the U.S. Open two years ago and lost her match against Naomi Osaka after receiving a game penalty, all the armchair experts weighed in on social media. Having zero knowledge of the rules of tennis was no impediment to declaring that Serena was punished because she's a woman, which wasn’t the case. The same thing happened after Djokovic's default. Twitter pundits—none of whom had ever seen a tennis rule book—were confidently declaring the disqualification a disgrace. Djokovic doesn't get the respect he deserves, they said; it was an accident; he didn't hit even the ball that hard. Some even accused the line judge of playacting. One vicious Djokovic fan, probably in Serbia, tweeted to her that she'd soon be joining her dead son.

While it was an accident, it was one of negligence. How hard the ball was hit isn’t relevant after a tennis official has been forced to leave a match. Despite the outcry by ignorant partisans against the harsh penalty, every tennis insider who saw what happened knew right away that it was over for Djokovic. You don't even have to make contact with a tennis official to be defaulted. Goran Ivanisevic, Djokovic's current coach, was defaulted from a tournament in 2000 in Brighton, England, just for smashing all of his racquets.

Novak Djokovic, who was undefeated in 2020 until Sunday, is on track to one day being recognized as the greatest player in tennis history. But his fans have always complained that he doesn't get the respect that Roger Federer and Rafael Nadal—the other two members of the Big Three—command. Perhaps an inventory of Djokovic's behavior in 2020 would shed some light on that issue: so far, he's gotten a bunch of people infected with the coronavirus, caused considerable pain to a woman because he was careless and couldn't control his temper, and then walked away from the incident like a coward.

It's safe to say that 33-year-old Djokovic is a man of questionable judgment. At this point, he's going to have to fight if he wants his reputation to survive.