Can Young Tennis Talent Rise to the Occasion?

Exploring the changing of the guard in men’s professional tennis. 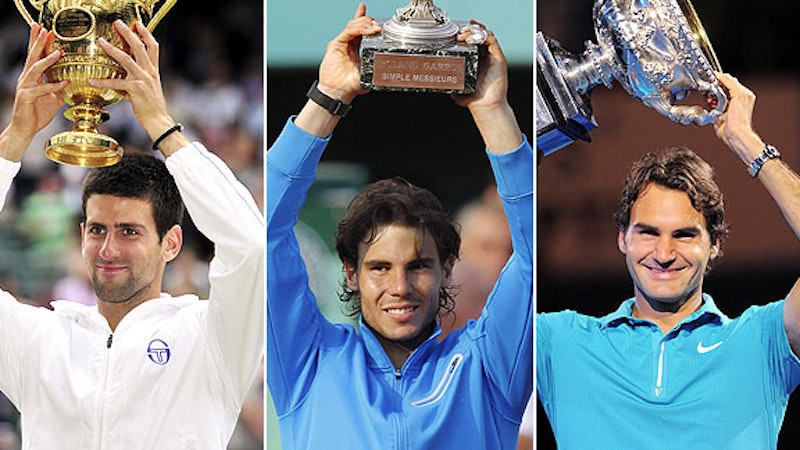 Recent upsets in the 2013 Mutua Madrid Open provide evidence of the long anticipated changing of the guard in men’s professional tennis. Rafael Nadal won the tournament, but there were also a few surprises. Kei Nishikori, 23, defeated Roger Federer and even earlier in the week, 22-year-old Grigor Dimitrov found himself with a win over the current world number one, Novak Djokovic. The unusual results of this tournament create much anticipation for the upcoming summer, but why?

For the past eight years, Federer, Nadal and Djokovic have dominated the professional tennis landscape. They are a diverse trifecta of players that have arguably established the greatest seize on the sport in history. Now, there’s an opportunity for a new generation of players to take over. However, the tennis world is struggling to produce anyone capable of overthrowing the oligarchy that The Big Three have so firmly established. The transition into a new regime is inevitable, but whether the young players of today make a stand this year or next, it will not compare to the excitement and unforeseen potential The Big Three brought when they took the reins.

Federer, Nadal, and Djokovic each won a Grand Slam title by the age of 23. In fact, Nadal won three French Open titles by his 22nd birthday. The Big Three’s moves into power were well underway when they were the ages of today’s best young players. I still remember watching Nadal compete in Wimbledon when he was only 16. His whipping, left-handed forehand and explosive, almost brutish movements behind the baseline have brought a new physicality to the sport. I experienced something similar with Djokovic. I watched, shocked, as an 18-year-old drove his backhand down the line with such force that even Nadal struggled to track it down. And today I still watch these same players, dumbfounded at what they are capable of on the court. Sure, some of the young guns like Milos Raonic and Dimitrov have distinguishable and effective games, but in comparison to their predecessors, they have a long way to go.

Currently, there are only six active players who have won Grand Slam titles: Federer, Nadal, Djokovic, Lleyton Hewitt, Andy Murray, and Juan Martin del Potro. Why not more? The WTA has close to 10 that have won one within the past decade. The Big Three have prevented it. Hewitt won the second of his two Grand Slam titles in 2002. Del Potro, now 24, has shown promise since he first turned pro in 2005. His domineering serve and hard-hit forehand are exceptional even in the power age of tennis, yet it was only in the 2009 U.S. Open that he was able to upset Federer for the title, and since then he has combatted a series of injuries and slowly climbed his way back to the top ten. Andy Murray, a once promising young Scot, just recently won his first Grand Slam title at the age of 25. He has reached five Grand Slam finals since 2010, and succumbed to one of The Big Three in each. It wasn’t until the end of the 2012 season at Flushing Meadows, his fifth major final, that Murray upset Djokovic to win the U.S. Open. Even Murray, the most promising of outside talent, has experienced delayed success as a byproduct of The Big Three’s dominance.

One of the more intriguing aspects of The Big Three is the fact that their playing styles contrast with one another, giving each their own “home court” surface. Nadal, for instance, has earned himself the nickname The King of Clay after winning seven French Open titles—a world record—the first of which was just days after his 19th birthday. Federer owns the grass as co-holder for most Wimbledon titles, totaling at seven, and Djokovic has won four of his six major titles on the plexi-cushion down under at the Australian Open. The specializations of each of the three players have raised the standard of success far from its previous resting place to a level that only The Big Three have reached. They have been forced to adapt to the various surfaces to stay competitive with each other. As a result, Federer and Nadal have won each of the four major titles at least once and Djokovic has won all except for the French Open. A title at all four majors is a rare feat. It’s even more rare for two players to accomplish it within a few years of each other. The fact that two of today’s players are arguably the greatest ever on their respective surfaces only aids the argument that we are among the greatest generation of tennis players in history, a tough act to follow for the anticipated up-and-comers. I don’t believe this is a coincidence.

It can be argued that Nadal, Federer and Djokovic would all have been even more dominant had they had the luxury of playing in a world absent the other two, but there is a stronger case for the contrary. Their dominance has progressed in cycles ever since Federer became the world number one in 2004. In 2008, Nadal claimed the coveted position and in 2011 Djokovic took it for the first time in his career. The three players have virtually held the top three positions in the world since 2007. It was only recently that Murray broke the stranglehold when Nadal took yet another extended injury break. The ability of each of these three players has complemented that of the others, allowing them to seclude themselves from the rest of the tennis world and earn titles like “The Big Three.”

The achievements of The Big Three leave set a high standard for today’s best young players. Nadal, Djokovic, and Federer actively established the greatest generation of men’s tennis in history—a far cry from the muddled list of champions that arose in the 1990s. Now, we wait for the wearing knees of Nadal, the growing age of Federer and the partially fulfilled potential of Djokovic to run their course. We wait for child prodigies such as Bernard Tomic, Grigor Dimitrov, and Milos Raonic to prove they are capable of more than possessing potential.