Why You Go to Spring Training 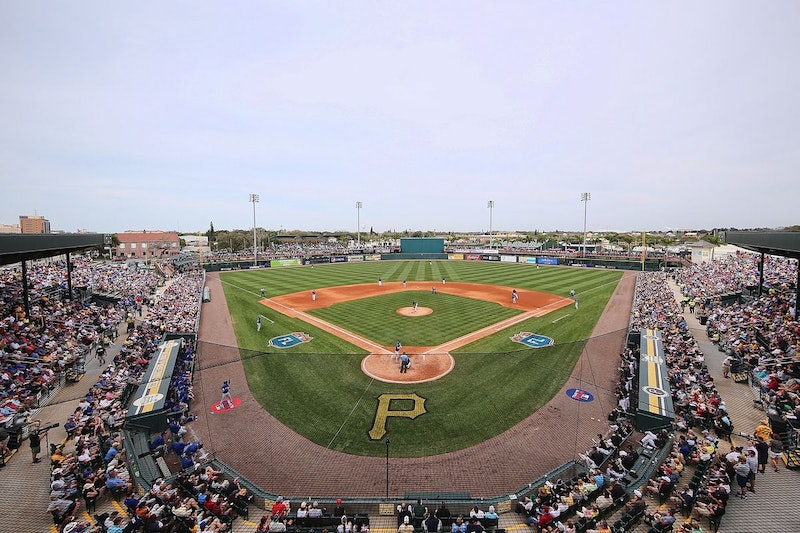 You go to Spring Training because so long ago when Brooklyn winters threatened your life and self-esteem it forced you to scrounge for an airline out of LaGuardia that would deliver you with your last scoots into a baseball heaven of sorts.

Orange blossoms and Tropicana factory smells dominated the air off I-75 as your vehicle shaved through south Tampa. Maybe you have a convertible and some expired press credentials and a dream of watching three games in one day, swimming in the Gulf of Mexico in the morning off Anna Maria Island, catching Ron Jeremy's ill-fated stand-up comedy show at a strip club in West Melbourne, then swimming in the Atlantic under the moonlight off the Indialantic boardwalk. Throw in a Hooter's visit and the viewing of a nighttime rocket launch from Cape Canaveral and you have many of my baseball-crazed March holidays through the past few decades.

Many of them were documented in the pages of New York Press thanks to my permissive editor Sam Sifton, who gave me a long leash on reality and sports. He knew that you went to Spring Training not to witness Mike Piazza's bravado but instead to see catcher Joe Oliver in a jersey so red that it hurts your hangover and the Reds are all sloppy at mid-day in Port St. Lucie against the equally sloppy early-March Mets. Sifton knew Darryl Boston might get in a fight in the pizza parlor parking lot in Port St. Lucie and that Warren Cromartie was headed to Vero Beach with a comeback in mind with the Dodgers.

I would present meal expense receipts from Long Doggers on A1A or Pepe's in Bradenton or even the Pelican Lounge in Indian Harbour Beach. These days, I’m visiting my Pirates fan mom in Florida who has been to Forbes Field, Three Rivers Stadium and PNC Park and thinks every pitcher is Kent Tekulve or Dave Giusti, which is okay in my book. It’s an American revival, to leave the freezing rain of the northeast and arrive in a place called Manatee County and watch a relief pitcher called Montana Durapau throw to a catcher named Ryan Haug whose "g" might be silent during a 3-3 game in the late innings.

It’s 3:06 in the afternoon and 78 degrees and you have a beer in hand and the starter Chris Archer practiced wearing his emotions on his sleeve with his sublime deconstruction of a pitching delivery. He throws the ball with the aplomb of a man trying on new shoes, looking for a mirror on the angle of his landing foot, listening for that odd creak of a lace or misaligned heel cup or perhaps calling for the Braddock device for a re-measurement. This after you've parked your rental car in a crushed grass lot of an auto detailing place in the sketchy neighborhood that surrounds the Pirates spring training park. It’s got auto detailing joints and a crematory.

There are no strip malls and it’s old school Florida and it’s late in Spring Training so starters are hanging around late in the game and the national media is interviewing catcher Francisco Cervelli about the situation in his mother's home country of Venezuela and half of Maryland has piled into Bradenton to see the Orioles take on the Bucs. They are close neighbors with their own camp in nearby Sarasota and their burly fans get the jokes about the 1979 and 1971 World Series and Wild Bill and maybe even John Waters and Devine, it they’re wearing the right shoes.

The Tip Top Bar in Bradenton, which is not Dorian's Red Hand in Upper Manhattan, looked to be under renovation and therefore not serving. You go to Spring Training so you can uncap a Sharpie and sign the yellowed canvas of a disco-era sign reading "AIN'T NO STOPPING US NOW" which you saw bobbing up and down off the outfield upper deck at Three Rivers in 1979 and here it is in Bradenton in 2019. A crispy dude has preserved it and has it at most games for all to see and enjoy and reminisce. And now your name is on it and may be this is the year because of Melky Cabrera and Jung Ho Kang.

You go to Spring Training to experience that sun-drenched languor of staring at the exquisite row of palm trees ringing the Bucco park in Bradenton and you realize how old the grandstands are and remember the same angles back when there were folding chairs for seats down front and Duffy Dyer was campaigning for a job and Jim Leyland had a cigarette stash. Now they have an excellent outfield boardwalk with delicious concessions manned by over-friendly locals and seniors, many who remember Dyer and Leyland. The aisle vendors are still laconic southerners whose speech is on a slowed loop that cannot synch with northerners ordering goods in a rush and giving them a tip.

March Madness is underway and in the old pre-cell phone days we waited for Spring Training P.A. announcers to give NCAA basketball score updates. Nowadays everyone is in their own mobile device info pod so that romance has been destroyed and makes everyone a soulless bracket jockey who takes Duke to win. No thanks.

You go to Spring Training to get in on pretty hefty 50/50 raffles among the 6049 at Lecom Park a week before Opening Day. You go to Spring Training and wait around long enough to see Carl Yastrzemski's grandson Mike put into the game for Baltimore. And he’s in there with Preston Palmeiro, the son of former O's standout Rafael Palmeiro. Spring Training is MLB's Ancestry.com in a way, especially in the late innings. The Bucs had coaches Omar Moreno and Rennie Stennett in the house, as well as the aforementioned Tekulve. All this means attending a Spring Training game gives you a historical reinforcement of sorts. A validation of history's parking voucher, if you will.

You go to Spring Training because with the bases loaded you lean over to your 14-year-old daughter and tell her Jung Ho Kang is going to hit a walk-off grand slam into a trashcan in the right center pavilion. After he does that, she looks you in the eye as an athlete (soccer and softball) who supports the Pirates via generational osmosis courtesy of the MLB Extra Innings package and several early August trips to the baseball Taj Mahal that is PNC Park and the fact that her great-grandfather's pocket watch sits on a shrine in our house set permanently to 3:36 p.m., the minute of Bill Mazeroski's homer to beat the Yanks in the 1960 World Series. Wow, dad, how did you know? The answer is in the bottom of the souvenir cup you will save and take home and use to water plants that will grow and grow and grow as you watch your team progress toward a sixth World Championship.