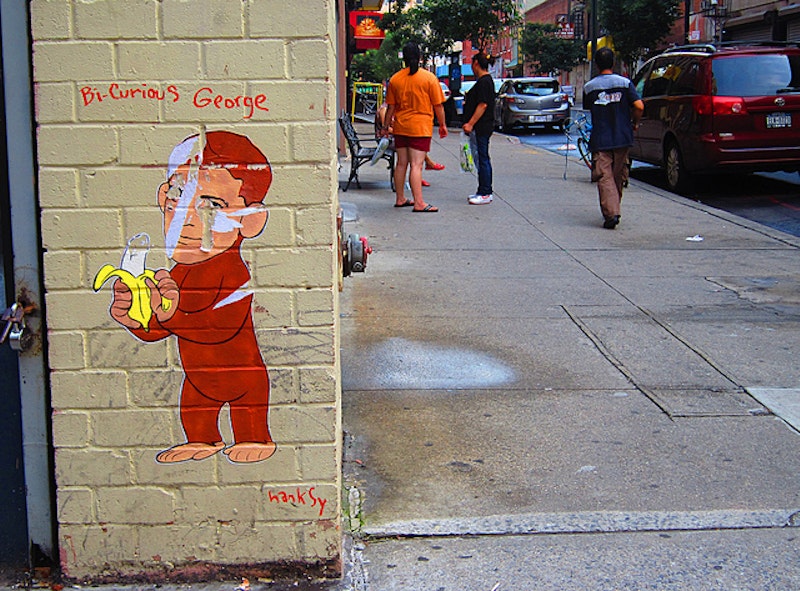 For many gay boys straight guys are the highest level of cock, the Abercrombie-esque masculine ideal we lust after but aren’t really supposed to touch. Straight guys are seen as “conquerable,” more masculine, dominant, more “toppy” or virile in the bedroom. Heterosexuality as the apex of masculinity.

In college I was pretty successful at bringing my straight guy fantasies to life. Adam, a tall skinny bro from Ohio who lived on my floor during my freshman year, used to hang out with my roommates all the time, and I flirted with him every time he came by. Adam introduced me to now defunct Audiogalaxy and illegal downloads and helped me get some of my favorite music for free.  I knew he was a computer person, so I’d flirt by asking him dumb questions about technology just to get him to talk to me. It’s not like he never flirted back, saying my name in an affected manner, rubbing my shoulders sometimes, coming by my room in just gym shorts and flip-flops and playing with his manhood, though I don’t think he knew I was watching. It’s just a thing guys do.

“Oh yeah?” he grinned at me, slouching in the driver’s seat a little and showing me the imprint of his erect dick. If that’s not an invitation I don’t know what is. But I didn’t know what to do. I felt safe because we’d already been close friends for months and he knew I was gay so I didn’t think he would hurt me, but I’d also never been in this situation before and never thought it would happen, though I’d fantasized about it plenty.

We hung out as friends and sex friends for nearly all of freshman year. But I knew Adam was straight and that he didn’t or couldn’t have feelings for me beyond friendship. I loved that no one knew we were hooking up, even when we all hung out in a big group, even when we walked past each other on campus.

When you have sex with a straight boy there’s always the sense that he’s not the gay one, you are. Adam and I never talked about this explicitly, but somehow he always made sure to remind me that he was the straight one.

I’ve had countless late-night one-on-one conversations with straight boys about “what gay sex is like” and “are you the ‘man’ or the ‘woman’/how do you decide who does what?,” and these types of conversations usually ended with a real-time “demonstration,” if you catch my drift.

I get why straight people ask gays about our sex lives because everybody loves talking about sex. But what I don’t get is why those late-night conversations often turn into actual gay sex, getting the straight boy to momentarily think past his default straightness. Was it deep curiosity that brought him over the edge? Is it because straight guys are attracted to femininity or feminine qualities, so because I’m non-threatening, small, and more feminine than I am masculine, did I seem like a “safe” way to “try” gay sex? Or do they think gay sex is better, brighter, kinkier, edgier?

There’s a common thread in pop culture that gay guys are better at giving head than straight girls because we already have dicks so we know what feels nice. Any straight guy who wants earth-shattering head will have to go gay to get it, the story goes. I’m confident there are some amazing cocksuckers of all genders out there, but that didn’t stop Vice from sending some straight guys to find out once and for all who was better at sucking cock, gay guys or straight girls.

Straight guys are afraid of gay guys because they think every gay guy wants to sleep with every straight guy. Well, you’ve got it all wrong. Sometimes it’s the straight guys who come after us.