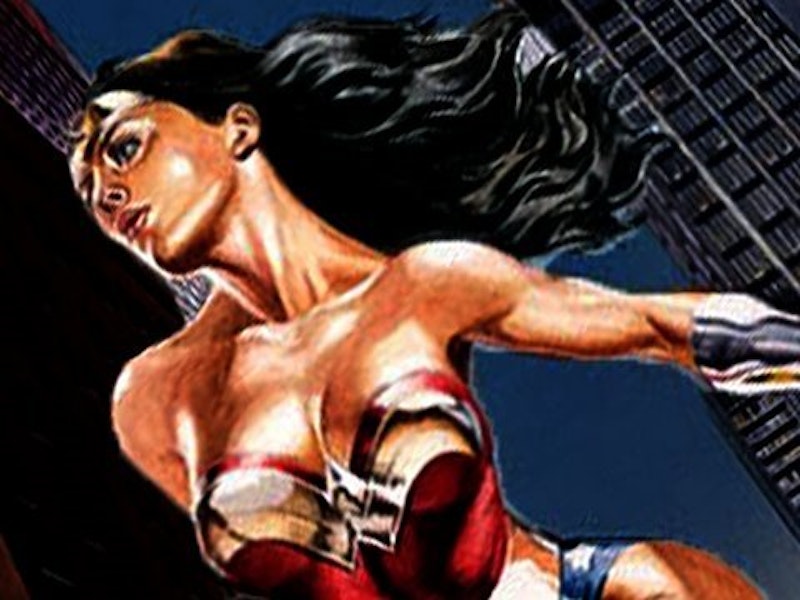 So it's not really a surprise that when he drew Spider-Woman, it looked like this:

Our heroine, perched on the roof in body paint, waits to be sodomized by the skyline.

It's definitely true that Spider-Man's butt is on display here. And, for that matter, male superheroes in general are insistently sexualized. They wear skin-tight suits; they have bulging muscles on their muscles, and abs popping out of their abs. Man of Steel certainly wasn't shy about showing off shirtless Henry Cavill as the hairy, pec-ful Superman: Nor is that image out of keeping with the comics… witness Wolverine with shirt off and (ahem) claws extended:

And speaking of anatomically impossible, here's Rob Liefield's version of the Hulk:

Muscles are to men what breasts are to women; the sexualized signs of gender that comics artists inflate improbably and often incompetently. Whether you're a guy superhero or a girl superhero, the fantasy demands hyper-sexualized, idealized bodies.

Ross Lincoln argues that the difference between covers like these and Manara's Spider-Woman cover is that "men are idealized more than they are objectified," and that male characters are allowed to have other characteristics besides sexiness. I'm not sure this is convincing. The images of Wolverine and Henry Cavill/Superman seem plenty objectified. And, for that matter, if sexiness is musculature, it's not clear exactly what else there is to the Hulk, who is largely mindless and is holding that hammer like a phallic symbol. Nor does eroticism entirely eclipse all of Spider-Woman's attributes. She's crawling around on the roof, after all, which suggests some super-agility (and super-temperature regulation, maybe, since she doesn't seem to be wearing any clothes.)

But there definitely is a difference between the way men and women are treated. That difference isn't that men can be something other than sexy. Rather, it's that men's sexiness is linked to power. Henry Cavill is sexy because he’s fit and running with those not-just-for-display muscles; Wolverine is sexy because he's using those powerful arms to just about lift Jean Grey off the ground. Spider-Woman's rear just sits there, but Spider-Man's butt is a functional, active posterior, emphasizing its perfection by swinging his legs about over his head. For men, sexiness is activity, strength, and empowerment—perfect for an empowerment fantasy like superheroes.

For women, stereotypical sexiness is different. Women, supposedly, aren't sexy when they're strong. Instead, they're sexy when they're vulnerable, receptive, and accessible. Spider-Woman in Manara's image isn't really doing anything—she's not running, or picking up someone, or shooting green bolts out of her finger. She's just twisting around in the altogether, with her back parts beckoning. The issue isn't that she's more sexualized than male superheroes; it’s that she's differently sexualized. For male superheroes, being sexy means being empowered. For Spider-Woman, being sexy means being vulnerable.

Milo Manara admits that he's working from stereotypes of femininity in a recent interview.

"For evolutionists, including me, on the other hand, women's bodies have taken this form over the millennia in order to avoid the 'extinction’ of the species, in fact. If women were made exactly as men, with the same shape, I think we would have already been extinct for a long time."

Evolution has formed women's rear ends to be receptive; there’s nothing Manara can do about it. If we drop the evolutionary psych fantasies and return to the real world, though, it's pretty clear that women's empowerment can be, and often is, sexy.  That was the genius of the Wonder Woman television show; Lynda Carter started out as buttoned up (but still sexy!) Diana Prince, and then, in a spinning explosion of color and light, transforms into our bustier-clad, statuesque, semi-nude, but not-at-all passive heroine.

That's a vision of women's sexuality that's a lot more congruent with what people, men and women, want from superhero comics. Sexy superhero men link sexiness to the empowerment fantasy. Sexy superhero women can do that as well; though not, unfortunately, when they're drawn by Milo Manara.