Homophobic Slurs in the Safe Space of Sex

It can be impossible to overcome the hurdle of masculinity. 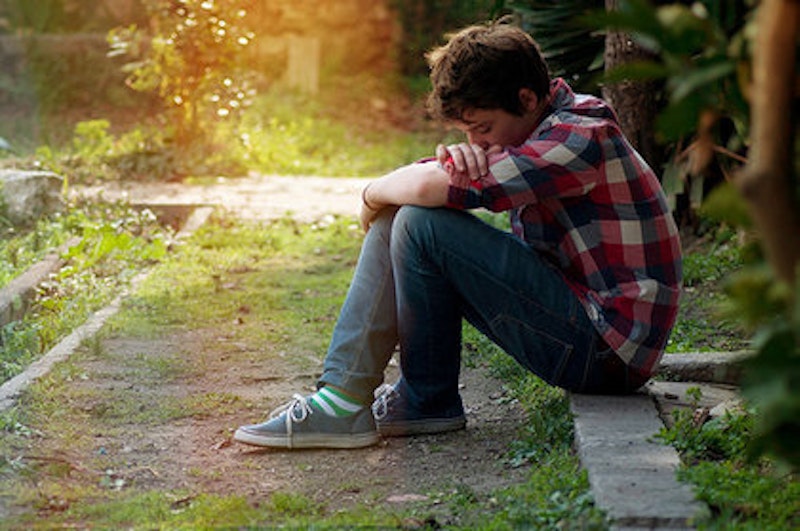 When I was in fifth grade, I recall sitting on the cold metallic bench on the outskirts of the town’s community soccer fields. My team had just won their game and in celebration, they were sitting the middle of the grass eating orange slices and drinking Capri Suns. Eager to join them, I attempted to rush the field but as I approached the group, two of my teammates pushed me into the grass and sneered, “This is a boys’ soccer team, you sissy.” I spent the rest of the afternoon picking grass and waiting for my mom to pick me up in the family minivan.

Masculinity has always been a hurdle. I was just stereotypically man enough to have my parents place me in every sports team they could sign up for, but feminine enough to be ostracized by all my teammates. I had a higher-pitched voice and I enjoyed the Spice Girls over the Power Rangers. Masculinity seemed, to me, a hierarchy in which we are all sentient, a system for who could fly through life without scrutiny, and who would be ranked as less than normal. Throughout my life and sexual history, this hierarchy has existed to keep those who don’t follow it the submissive party in their love lives.

There is something surreal about being called a faggot by someone you’re blowing. Something sticks with you. Something reminds you that there will always be those who equate a deep voice and muscles to power. Something that will always be there, attempting to repress those who don’t fall in line with the list of adjectives both men and women are expected to fulfill by society.

I’d been living in Chicago for about three months when I met the boy I was seeing. He bought me a drink on my birthday in the bar next to my apartment. Pitifully sitting alone, he approached me with slicked-back hair and a green button-up. With bulging muscles and a chiseled jaw line, he moved with a strong air of confidence. Yet when he opened his mouth and began to ask me why I was sitting alone at a bar on a Tuesday night, he had a tender disposition that signaled he was a strong candidate for a summer fling.

After our third dinner date, he cautiously integrated me into his group of friends. First, I met his best girlfriend for coffee one afternoon after a busy day at my internship. She was soft-spoken and seemed like someone I would enjoy having around. We exchanged numbers after our meeting and it felt like I had begun to make a solid group of friends for the duration of my writing internship that had brought me to Chicago in the first place. I had stepped off the plane knowing not a soul, so the idea of having a group to explore the city with was completely intoxicating.

A few days later, he brought me to a small gathering to drink Red Stripes and watch Fourth of July fireworks from the roof of his friend’s apartment building. Watching the plumes of smoke billow up above the city, he placed his arm around me. Afterwards, we went inside to play beer pong with his best friend and girlfriend. The friend wanted to make the game “interesting,” joking that the losing team would have to perform oral sex on the winning team. I found it strange, but figured it was all in jest and went along with it. When the boy I was seeing and his friend won, the friend jumped up and down, screaming across the table at my beer pong partner and me. “Ha! You and the fairy have to suck us now!” I took it as a sign he was beyond wasted and let myself back onto the roof for some fresh air.

The following weekend, he pulled me onto his lap as another member of the group re-filled our glasses of wine. As more of his friends showed up, the game grew increasingly heated. I’d been trying to get rid of my three when the friend who called me a fairy calls me on my bluff. He cheers the guys next to him as I picked up the cards I had placed down.

“So…” he narrowed his eyes as he picked up his Bud Light, “which one of you is the boy… and which one of you is the girl?” I opened my mouth to say that we’re both the boys, that that’s the point of a homosexual relationship, when my suitor cuts me off. “Well, Shawn is…. he’s definitely the more feminine one.” The table erupted in awkward laughs. Pushing myself off his lap, I faked a stomachache and let myself out, my finger on the delete button of my cell phone next to his contact the entire walk home.

We relaxed in his hammock after watching a movie together and gazed up at the stars. The air was muggy and it made my face stick slightly to his shirt as he held me close. I felt tranquil, and I remember feeling like I might be able to make Chicago my home. He took my face in his hands and began to kiss me and unbutton the top of my shirt. As we continued to make out, we moved to his bed where he pulled down his pants and motioned for me to come closer. It was the first time we had done anything more than kiss and my hands shook as I slid his underwear down to his ankles. I began to go down on him as he gripped the back of my head, moaning quietly at first, then with increasing volume. ‘Oh, yeah, you like that, you little faggot? You like that big cock, you fucking faggot?” I stopped mid-way down his shaft and unwrapped my lips from his cock. Did he really just call me a faggot? Was he really throwing homophobic slurs as I performed oral sex on him? In that moment I felt like Charlotte from Sex in the City when her boyfriend calls her a fucking whore as he climaxed.

“Excuse me, what did you just say?” He stared at me with mild shock, his brow slightly furrowed and his hands touching his hair. I backed up to the other side of the bed and tried to focus on what I was feeling. “What… did you just say to me?” I asked him; more naked than when I removed my underwear. He just stared at me as I got off the bed and got dressed. I told him I wasn’t in the mood anymore and let myself out the front door. When I got a block away from his apartment I sat down on the bench next to the bus stop and began to pat my face. It all clicked at that moment. There was a hierarchy and he was attempting to remind me of it.

I saw him two months later. He was wearing his olive green button-up and standing next to a shorter blond boy with a chiseled jaw line. They were deep in conversation and I tried to act preoccupied with my cell phone as we all waited for the train to pull up. As the train arrived and the doors slid open, I took one last look at them as I stepped into a separate car. I thought of the boy with the blond hair and wondered if he’d gone through what I did. I wondered if he felt connected to the boy he stood next to, I wondered if he felt safe and secure when they cuddled close together. It crossed my mind that maybe he, too, had felt the harsh sting of homophobia seep into the safe space of sex. And I wondered if he even cared.