Painting Your Fingernails the Color of Fear

What’s going to save you is a clear mind, not a clear topcoat of polish. 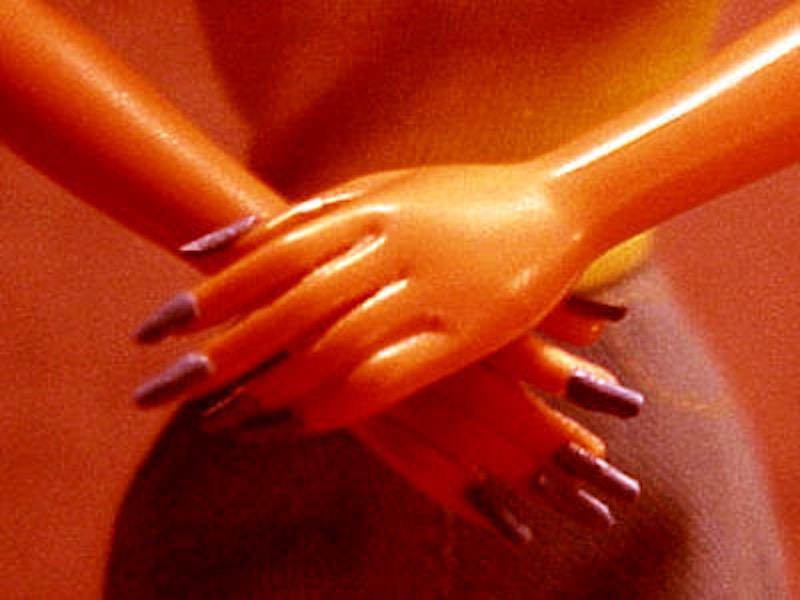 He thinks it’s cute that you‘re stirring your drink with a freshly manicured finger, but it’s deliberate. You look down and your nail polish has turned a new shade that signals danger. Unfortunately, that smear of bold lacquer across your fingernails probably isn’t going to save you, but it’s a nice try. Undercover Colors is a nail polish invented by four male engineering undergraduates at North Carolina State University. The product is still in the development stage, but they’ve received funding and a lot of press. Tyler Confrey-Maloney, Stephen Gray, Ankesh Madan and Tasso Von Windheim are encouraging people to talk about sexual assault and prevention, and that’s certainly positive.

According to the Undercover Colors Facebook page, “Through this nail polish and similar technologies, we hope to make potential perpetrators afraid to spike a woman’s drink because there’s now a risk that they can get caught. In effect, we want to shift the fear from the victims to the perpetrators.” All you have to do is dip one of your painted fingernails in your cocktail. If your drink’s been tainted by drugs such as Rohypnol, Xanax, and GHB, the polish will change color. Cosmetic companies have teams who come up with those cute, fun or sexy names for nail polish, but there is no darling name for rape. What is the color of fear, pain and shame?

Rape is the color of Spilled Blood: it’s the most shocking shade of red on earth. A rapist doesn’t need a date rape drug if he has a knife or just overpowers you.

Rape is Flesh Tone: it’s every color of flesh that human beings are made from and that applies to the perpetrator and the victim.

Rape is the color of a Healing Bruise: it’s blue and green and yellow. We must continue working to improve the legal and mental health systems, and to provide more resources for women who are victims of sexual assault.

Rape is the Blackness of the Human Soul: rape destroys our humanity. It takes away something precious. We can educate women and men and especially our children, but you can’t educate a psychopath who has a deep hatred of women; that’s a mental health issue.

Rape is a White Shroud. We mourn and we promise to make change, but what are you doing to prevent sexual assault? At least these four young men are trying to make a difference. It’s possible that this and other anti-rape products could work in some instances. If nail polish saves one woman from being assaulted, that is a good thing.

What’s going to save you is a clear mind, not a clear topcoat of polish. A man doesn’t have to put something in your wine if you drink too much. Teenage girls who aren’t used to drinking have been raped when they became so intoxicated that they pass out. A man can also put a drug in another drug, so that joint you are smoking may have something else in it. We can be proactive and use preventative measures that we don’t have to purchase online. Be smart and do what makes you feel strong. If taking martial arts makes you feel that way – do it. Check out The Rape, Abuse & Incest National Network (RAINN) for more advice.

There are pros and cons to all anti-rape products. Not every woman has the funds to purchase these items, and the most vulnerable women probably don’t have access to these products. Undercover Colors is billing its project as “The first fashion company empowering women to prevent sexual assault.” Well, maybe not the first. There’s a product called AR Wear. This is underwear that’s supposed to prevent sexual assault. Why can’t you wear a sexy thong under your jeans? Maybe we should all be wearing bullet-proof clothing too. People get shot all the time.

You can wear something in your vagina that won’t prevent rape, but the Rape-aXe condom has jagged teeth that hook on to the man’s penis. He can’t get it off without going to a doctor. Do you really want to walk around with a weapon in your vagina? The inventors are promoting this product for women in countries where they are more at risk, but a man who has his penis in a vise is more likely to kill a woman out of anger.

While it’s commendable that inventors want to help women, these products can give us a false sense of security. They also impact any natural feelings of positive human sexuality. It’s wonderful to feel attraction to a man, but how are you going to stroke his cheek with your anti-rape painted nails when you feel that blush of desire and have that first kiss?

We should be able to paint our nails before a night out because it makes us feel good and we want our hands to look pretty. Should we also file our nails to a point in case we have to scratch a man’s eyes out?

We could also stay in our homes and never go out, but that won’t stop us from being raped. I know this too well. On my 25th birthday, I was raped by a stranger who came into my apartment after he saw me stumbling home after a birthday dinner. A friend helped me into my apartment and left without locking the door. (Not his fault, we never locked our doors.) I was passed out on the bed in my little black dress and woke to a strange man with one hand over my mouth and the other around my neck.

There are probably men in your social circle who are rapists. There are men who rape their wives. Women are going to be raped, that is a fact. There’s always going to be war, murder and all the horrible things that we do to each other, but we can’t spend our lives wearing armor. We could also prevent more sexual assaults by moving to even more of a Big Brother state. If cameras captured our every move it would be more difficult for rapists to commit their crimes, but no one wants that.

We can be more outspoken, act with care, look out for each other and paint our nails the color of the sky. We can wrap our fingers around a glass of wine with our friends and even get wasted when we know it is safe, or we can wear the modern day version of a chastity belt, or a nail color called Fear.