What You Need to Understand About Explaining Sexual Harassment to Men 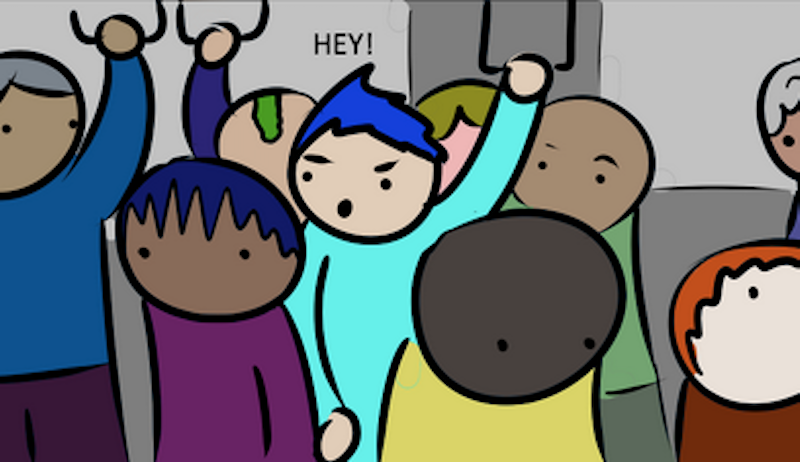 Here's a nice phrase: “well-meaning.” As in the “well-meaning question about sexist treatment of women” that a fellow asked an artist named, it would seem, Robot Hugs. The result was a 34-panel cartoon in which the artist lays out how the fellow should think and behave regarding the question of catcalling, or the yelping of would-be sexy comments at women walking down the street.

Robot, or Hugs, isn't the one who drops “well-meaning” on the poor male's attempt at understanding. That bit is the work of The Huffington Post, which presented the cartoon because the 34 panels contain “What Men Need To Understand About Everyday Sexual Harassment, In One Perfect Comic.” Watch out when a headline on the Internet tells you something is perfect. The cartoon has its good points, at least as exercises in mansplaining—sorry, consciousness-raising—tend to go. But there's a central flaw that escaped its creator, the HuffPo staff and most likely 99.97 percent of the readership. We'll see if you can spot what that is.

Here's how things kick off. “I'm not doubting that everyday sexual harassment of women happens,” says a cartoon man, figuratively knocking his head on the ground. “I promise, I know it happens. I know it's a problem.” Then, in what I imagine is a smaller voice, the question: “I just never really see it. Why is that and where is it happening?” The cartoon woman that he's talking to welcomes this opportunity. “That's a great question!” she says, encouraging him, and we're launched.

She talks, and talks some more: “It's important to remember that... part of a larger system... problematic idea... ownership of space...” Meanwhile, cartoon jerks illustrate her points with snippets of dialogue. What the woman has to say is that some men, definitely not all, look about them and see a world that belongs to men. A woman who appears on this landscape has to make clear that she recognizes who's in charge; for instance, by being in the company of a man and not giving him any guff. If she's on her own, the bad actors among the male set will take it on themselves to make clear how matters lie, or how they think matters lie. They'll do this by getting up in the woman's grill. Hence the comments they like to throw about clothing, demeanor and sexual desirability or its lack. If you can talk that way to somebody and get away with it, then you can feel like you're the boss, at least for as long as the two of you are in sight of each other.

Luckily, there's something the good guys can do about the bad guys: tell them to knock it off. Which is true and a decent point (with some caveats and exceptions depending on which comments are candidates for getting shot down). The cartoon lady says the man ought to check first and see if the woman wants him to do anything, which also makes sense. (The cartoon presents this idea by saying, “Respect our agency,” but still.) It's definitely all right for the guy to say something if only men are present and there's no woman on hand to tell them they're talking wrong; the cartoon woman is clear about that. All in all, she's on our side. “Men are our greatest allies in ending casual sexism and harassment!” the cartoon lady winds up. “We believe in you!” Her fists are up in the air when she says this.

Of course, there's something a man can't do, which is use his own judgment when he hears about a woman's experience with an aggressor, or alleged aggressor. What should a man do in such a case? “Believe us!” the woman says, and her arms are up in this panel too. “Don't deny or minimize our experiences!” Because experience is always so clear cut, especially when it comes to human interactions that involve sex and self-esteem, I suppose. Actually, the cartoon doesn't say why men should believe everything a woman tells them on this particular topic; it's more of a given.

At one point the cartoon gets down to evidence. The woman has presented the theory about harassment-as-control. “How can we tell that this is true?” she says. “There are some symptoms you can sometimes see.” She lists three: when men talk about a guy being pussywhipped (because he isn't keeping the woman in line), when they back off from a woman because they think she's got a fellow (that is, an overseer), and when they refer to a woman using language suitable to an object (“that,” for example).

Personally, I haven't heard any men talk about being pussywhipped; I had a woman colleague who would make a whipping sound when male co-workers were on the phone with their girlfriends, but that's really no help. I haven't come across the object stuff either, except possibly when a stout, bass-voiced student in a Pilates class referred admiringly to an instructor (“Jesus Christ, the body on that one”). But the student was a woman, and the instructor was a man.

I have seen the business about backing off in the presence of a partner, or supposed partner. But that behavior could be explained by reluctance to interfere in a relationship and/or get yourself punched. I always thought that most people, men and women, operate on the assumption that singles are the ones available for pick up. Do gays and lesbians operate differently than the rest of us when it comes to this kind of thing? If we found out, that might clear matters up; after all, gays and lesbians wouldn't base their pick-up activities on the need to keep women down in the interest of a supposed male supremacy. But Robot Hugs won't dive into the weeds to that extent.

My experience doesn't mean that no men talk about being whipped or getting some of “that.” I mean, of course, duh. But why does Robot Hugs run into this stuff so much more than I do? Which is pretty much the question the cartoon man asked the cartoon woman back in panel one. There we have the cartoon's gaping flaw. The fellow asks why he doesn't come across the nasty behavior, and the woman responds by citing behavior that would be hard to miss. Her bad guys shout things: “Cover the fuck up, fatty!” “You look like a slut!” “Keep walking, I wouldn't fuck you anyway.” Apparently men say these things to women all the time, out there in the public spaces that the fellows problematically consider their own. But other men don't have a clue this is going on, or at least that it's epidemic. Why?

The cartoon woman was going to explain, but instead she tells us how we should think about the behavior. “So why does this matter?” she asks rhetorically. We know why, anybody does—because people shouldn't yell nasty things at you. Or say them, or grab your ass, or make you worry about getting jumped. But no, we get the business about the problematic public spaces. Not only that, but soon enough the explainer assumes that we ourselves have witnessed giveaway behavior, namely the list of “symptoms.” It's like the poor cartoon guy had never asked his question.

This elaborate non-answer is what The Huffington Post considers a “perfect” summary of what men need to know about shitty male behavior toward women out on the street. Which means that hundreds of thousands of dutiful Internet clickers agree. This thing fits the bill as far as they're concerned. A load of woolly-mouthed jargon piled atop instructions on what men should say and do and when they should refrain from thinking for themselves—that's really all that needs to be said on the subject. I don't doubt that street harassment is a problem and that men can help solve it, to the extent it can be solved. But I believe these things despite the effort by Robot Hugs, not because.

Huffington Post, Internet cartoonists and feminist explainers in general, here's what you need to know about enlightening men when it comes to street harassment or anything else. Take their questions seriously. And the only way to take a question seriously is to answer it.