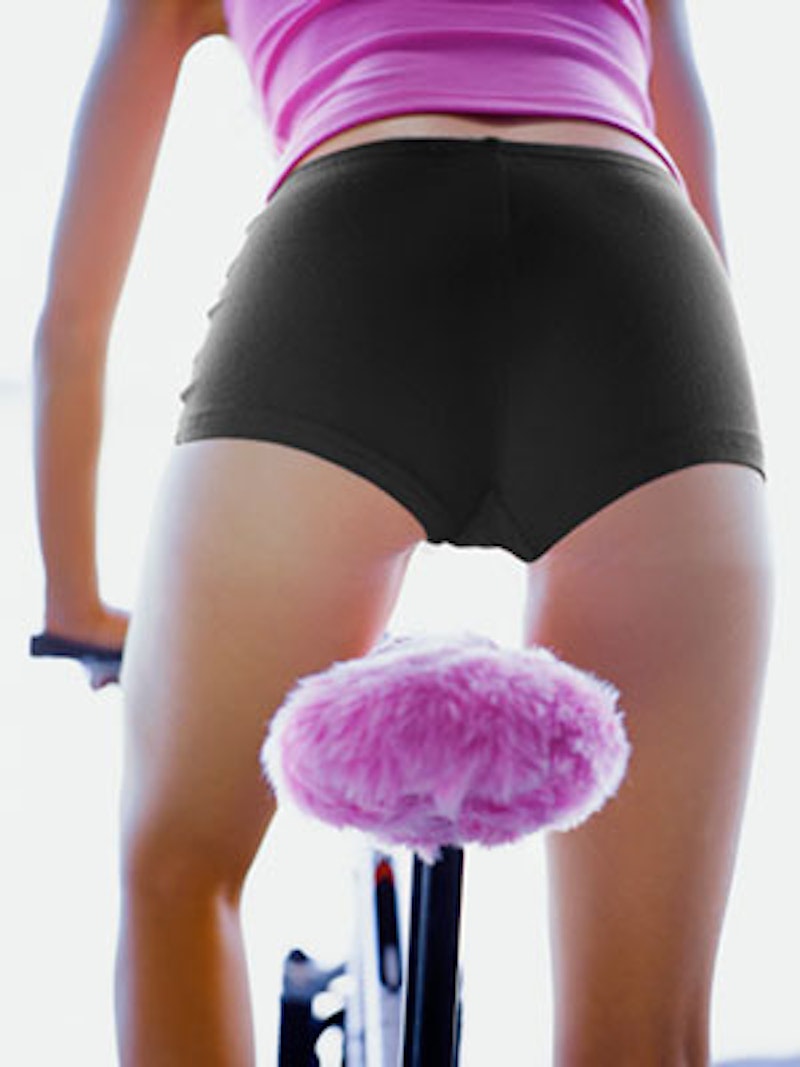 I start going to the gym this time of the year, because pretty soon it’s going to be spring, inevitably followed by summer and its unfortunate inclusion of bathing suits. I signed up with a trainer for the next month or two, and his job is to yell in my face that I eat too much bacon.

I take Zumba class three or four times a week and love it. One day the instructor wasn’t there and class was canceled. I don’t use the gym membership for anything else, really, because I don’t like machines that other sweaty people have been on, and I don’t like other sweaty people. But the lady at the desk told me spin class was about to start, so maybe I could try that.

I had tried it once, and there is a reason it was only once. I’d stayed with a friend in New York City overnight, and she took me to her fancy NYC gym spin class at seven a.m. before I had coffee. It was a nightmare. I couldn’t keep up. I couldn’t stand-spin-sit-spin in fast combinations, the class seemed to go on for a month, and when I got off the bike I felt like I was still cycling for the rest of the day. But the pain in my thighs and my butt, where spin class was supposed to make you feel pain, was nothing compared to the uniquely horrifying pain in my vagina.

I have given birth the old fashioned way four times, so I am no stranger to pain in the womanly nether regions. This pain, though, lasted longer. I have stood up and taken a shower within hours of having babies, but this ache went on for days. Obviously, I was doing spin class wrong. The seat is supposed to be adjusted, I determined, so that it isn’t trying to impregnate you with every up and down motion. Also, there are differing levels of spin class, and you want to try to avoid the “ride the bike like a tsunami is chasing you” level I had apparently attended in NYC.

So for this go-round, I talked to the instructor, explained to her that I had only been to one spin class and that it made me very afraid, and wasn’t sure I should try it again. She convinced me it was a casual beginners’ class, and was sure I could handle it. I should go at my own pace. I patiently informed her that my pace might include leaving early and taking a leisurely drive over to McDonald’s (conveniently located next to the gym) for a Shamrock Shake.

Five minutes into the class, I started hearing mumblings from my v-zone. Crap, I thought. This one-hour class is gonna kill me. I looked at the clock. I can’t piss off my girly parts again. My muff didn’t let me pee pain-free for a solid week after the last spin class. I tried using all the other parts of me that would keep weight off the area. I sat toward the back of the seat almost as though I was determined to make the stationary bike do a wheelie. I looked at the clock and sweated.

A grandmother-aged woman next to me rode her bike like it was a tricycle going downhill. She texted on her phone, apparently bored that the new girl was making the instructor ease up on everyone. Other women chatted with each other. I couldn’t understand how they did it. All my energy was focused on imagining that the bike seat was covered with a fluffy feather pillow, and trying to keep my grandest canyon from cursing at me so loudly the other women would hear.

And so you know what? Done. The vag wins. A life lesson I shouldn’t have needed to learn twice. She was there for me through four hellish shades of childbirth, and deserves to be respected. Damn the bathing suits. Heed the babymaker. Shamrock Shake it is.

Mary McCarthy (@marymac) blogs at pajamasandcoffee.com. She is not pictured above but wishes they had those seat covers at the gym.