How to Fail at Being Sexy

Start by being mistaken for a lesbian lover. 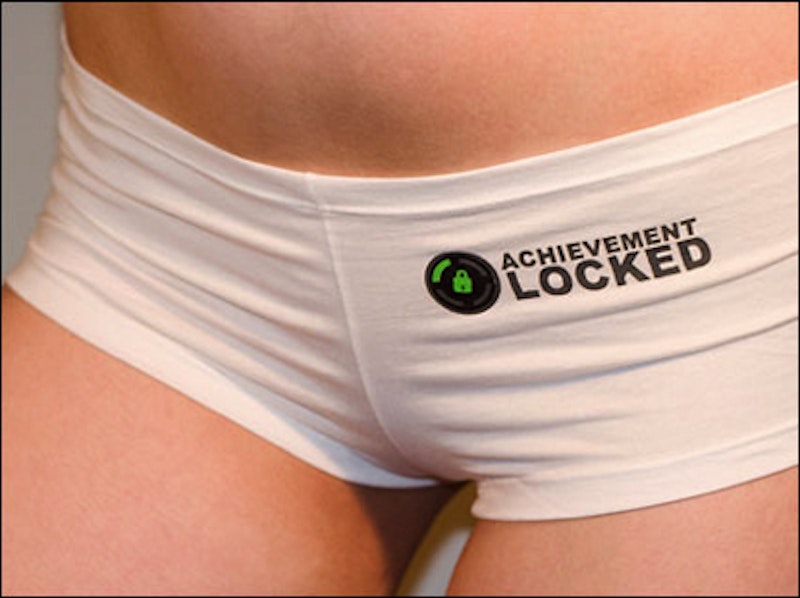 My friend Tara and I had a fab Thai lunch in downtown Annapolis, and she mentioned she wanted to stop by Victoria's Secret at the mall. Sure, I said, figuring she needed to pick up bras or whatever; also, there’s a Starbucks at the mall so I could get something iced and sugary.

"I haven't been in a Victoria’s Secret in 20 years," I said in an off-handed way. She looked at me like I had four heads, or four boobs.

For background, you just need to know that Tara is almost annoyingly perfect: long, blonde gorgeous hair, pretty eyes, perfect body, and also very smart and funny, which is why I’m her friend, because God knows I wouldn’t just be friends with some hot chick who was stupid.

I decide since I haven’t been in this lingerie store in two decades, perhaps I should try on stuff too. There is a six-item limit in the dressing room, and she is over it by about 12, and I am under it by two. Her stuff gets put on its own rack (that is to say: clothing rack). She tries on amazingly coordinated, sexy little outfits that all look stunning on her. I try on two baby doll nightgowns that she tells me I can’t get because they don’t “have enough support.” She’s right, but no way will I wear those underwire bra things to bed! Apparently I am missing the point. I also try on an orange, sparkly workout bra and yoga pant combo that I fall in love with, but is $80 (on clearance!).

I can’t find anything sexy to try on because all the clearance stuff isn’t my size (the D cup girls have already wiped out clearance) and the regular priced stuff is ridiculous—each “outfit” (which would spend five minutes on me and the rest of the night on the floor) is a minimum of $100 and anyway, I’m not trying clothing on next to her because she looks perfect in everything and having lost 50 pounds, I’m really not even sure what size I am. In short, I fail at being sexy.

So she selects four or so amazing combinations with adorable matching panties and I know she either already has or will get matching stripper-esque heels to go with each. Her husband is a lucky man. My husband is stuck seeing me in “Dangerous Before Coffee” flannel pajama bottoms. Poor guy. I vow to go back sometime and try on stuff so I can have like one sexy outfit at some point. I also vow to try to find a less expensive store in which to accomplish this.

We head to the checkout line. The girl has to order Tara something via iPad, an $80 bra they didn’t have in her size. She spends several hundred dollars on sexy; I spend $0 on sexy, $4.65 on a latte at Starbucks and $20 on two sets of notecards at Papyrus.

While Tara is working out shipping details on the iPad with one customer service person, another clerk is carefully wrapping and bagging her purchases. Tara is tapping away on the iPad when the bag is ready to be handed across the counter, and I see the shop worker give me a brief up-down glance. I’m wearing jeans and a t-shirt, glasses and a ponytail. She smiles, in what at first I think is an oddly knowing way. Then she hands the bag to me, in the way Victoria’s Secret workers have been handing bags across counters for three decades… to husbands. Apparently she has decided, what with gay marriage having passed in Maryland recently, that I am “with” Tara and therefore am the designated bag holder.

“Here you go,” she says, in her best I-support-gay-marriage-or-at-least-hot-lesbians way. “Her bag.”

No shop worker would hand a shopping bag to the straight girlfriend of a woman. It’s just not shop etiquette. You only get handed the bag if you are the shopper or the lover of the shopper. I think about how I impatiently meandered around the store for the half hour or so while Tara was in the dressing room. Sort of like… ah, God, yeah, I guess sort of like a husband would. What straight girl goes to Victoria’s Secret and doesn’t buy anything?

So I do the only sensible, non-sexy fake lesbian lover thing there is to do. I take the bag.