Marianne Williamson is Sexy as Fuck

I’m trying to get some folie à deux on with her and my husband. 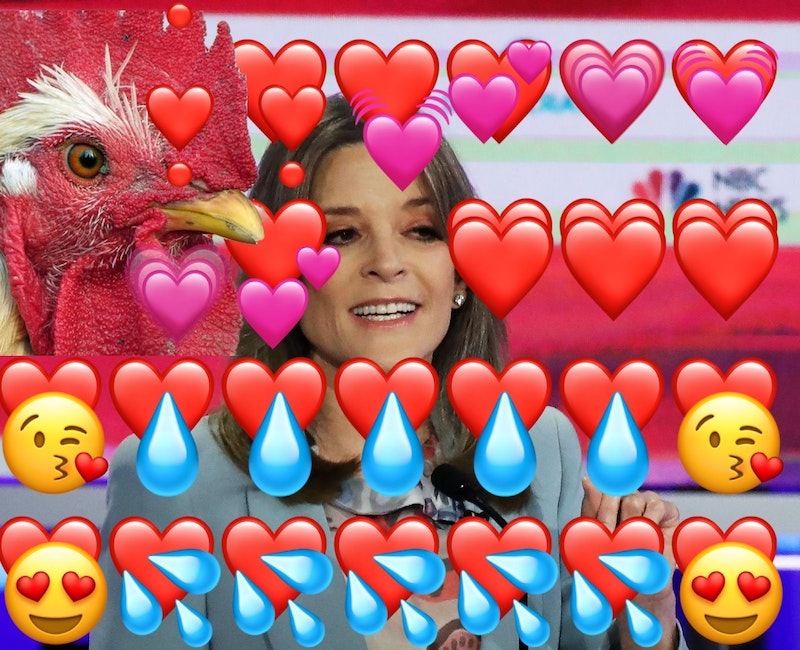 No, people are too busy doing blow in there… that’s one thing that hasn’t changed in my many years here: the animal affinity for cocaine. None for me, thanks… never was a touch on a batch of good trucker speed. The yellow stuff. Rooster and I used to get a quarter, split it, and slam it. Talk about fucking, we never stopped… actually, we did stop one time. We were so loaded we saw God, and I don’t mean we think we saw God, we actually saw the motherfucker, and He appeared to us and just waved His finger at us and said, “No.” That was enough for Rooster and me. And by the way, God is a man. But he’s not white, he’s see through… it’s hard to explain. Basically it’s like Hollow Man with less bacon (yum).

So I read Nicky Smith’s article on presidential candidate Marianne Williamson [https://www.splicetoday.com/politics-and-media/there-s-no-reason-marianne-williamson-can-t-be-president] and I’m curious… I realize I’ve looped back to the beginning of the previous paragraph but why not? I’m rolling, I’m having a great time, and from I’ve gathered, this is exactly what Mrs. Williamson wants. Wait, is she married? Is she down to get down? I find her very attractive. I mean, that voice. My cloaca is a torrent. I’ll spare you the rest. It’s been too long since we’ve had a president that’s sexual dynamite—well, I guess only two and a half years.

Barack Obama I found very fuckable, but I could never get past his security, and for all his talk of hope and change, he never seemed interested in appealing to the animals rights’ groups, the only humans who are doing anything to advocate for us “animals” (remember, they are animals too, and disgusting ones). I appreciate PETA, even if they all sort of seem like losers and their aesthetics are totally wack. Obama seems like he’d be good in bed, but I didn’t want to risk assassination trying to sneak into the White House. God, can you imagine? Me, Rooster, Barack, and Michelle? We’d still be in the Lincoln Bedroom.

George W. Bush? Trash. Bill Clinton? A walking petri dish. George H.W. Bush? Pretty sure he was asexual, at least I hope so. Ronald Reagan? Yeah, I’d rather ride a cheese grater than let that wax museum horror get anywhere near me. Jimmy Carter, on the other hand? Hot as fuck… I heard he’s into BDSM. I mean, it’s entirely possible. It’s always the quiet, sensitive ones… they understand the pleasure of pain. Not sure about Williamson’s “lovemap” as they say, but I’m sure she could be swayed, she seems suggestible and kind of stupid, which I like in a lover. It means I can take advantage of them. I mean, why do Roo and I work so well together? He’s kind of a pushover, and very lazy… he needs someone to take care of him.

We have our own relationship with nature, obviously closer to God than any of you people, but I believe that Williamson is on the right track with her “pray for your enemies” stuff and the whole manifesting your reality thing. It’s true: last week, just when I wished that my cousin-in-law, Bennington, would die soon, I heard that he was diagnosed with HIV. I’m so, so excited! The world will be a much better place when he’s gone. He can stop spreading vicious libel about me and my husband which Russ and Nicky Smith curiously decided to publish despite it obviously being a stunt by that cunt bird. Oh well… I’m not mad any more. No: I’m praying for Bennington. Believe it. You love to see it, folks.