My cousin Bennington has unconventional tastes... 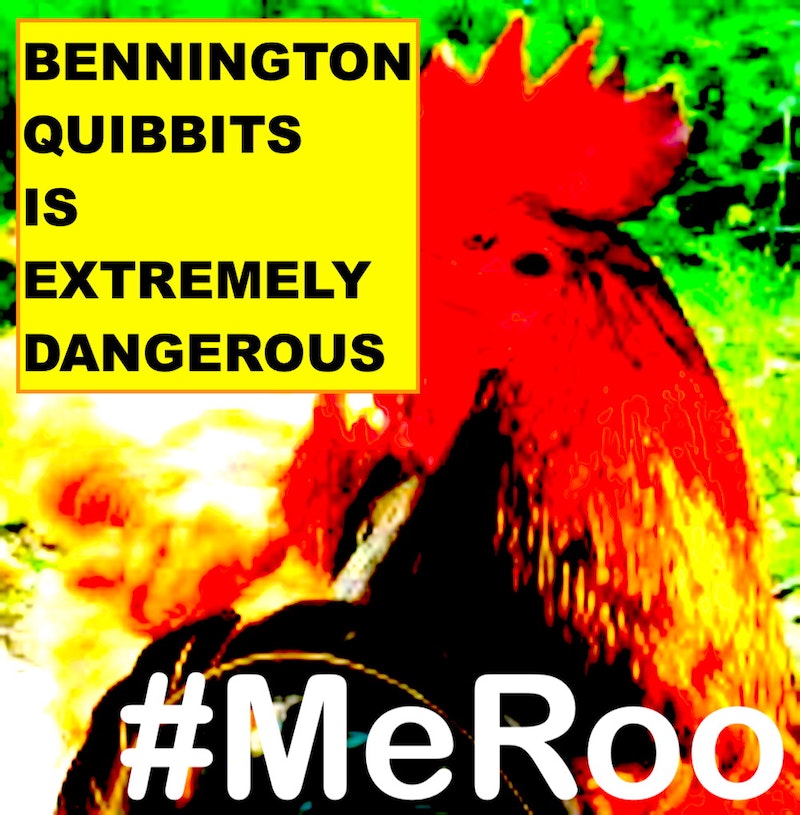 Me again. Yes, I’m back in these mo’fuckin’ margins again for the second time in a week. Any questions? Complaints? No? Good. If I find out anybody’s been talking behind my back, I’ll nip and then bite them. I’ll stab them repeatedly, and hold them as I watch the life leave their eyes.

Do I sound cold? You’re probably just a misogynist… most men are. For example, my husband’s cousin Bennington. He’s a cunt, and I mean that in the most misogynistic way possible. I hope he dies but he never does. He gets himself into so much trouble but always gets out of it. He plays fast and loose with his body, swallowing more drugs than he can digest and making side money as a rent rooster “just for the cred.” Ew… I may have killed hundreds in my former occupation saving victims of the Congolese cobalt miners (they were the bad guys, don’t trust the news, it’s fake), and Rooster has had a few Chappaquiddicks here and there (I always punished him but never asked about his dead paramours—all that mattered to me was that they were dead), but neither of us can do anything but wilt when confronted with Bennington’s body count. It’s amazing to me that he was never #MeToo’d, but then again, maybe he’s just not that famous. I say that because I know it’ll sting and hurt him more than anything else that he is, of all things, obscure.

Here’s a scoop for you: Bennington tried to rape me once. Yes, his cousin’s wife. He was drunk, I was high, and it was dark, but he realized it was me and kept going. Kept trying rather, because I stunned him with a double spur claw hackle attack that left him crying and apologizing in a puddle of his own fluids. This was before the Internet, before #MeToo, but I wouldn’t have “outed” him if it happened today. I mean, we all know Bennington rapes. It’s like how Rooster writes, or how I join extrajudicial paramilitary groups. It’s just something we do, and unfortunately Bennington’s hobby is becoming more and more difficult to manage.

Oh my god, when he tried to get it in with Rose McGowan? We thought we’d have to flee the country. This was before Harvey was exposed, but it was looking pretty dicey for a bit. I’m not even sure how Bennington ended up in the same room as McGowan—connections? He has none. Money? Spends it as quick as he steals it. Looks? Please… we all know my Roo got the good genes. Bennington must’ve been vaccinated as a ‘lil chick, because he’s definitely autistic, maybe even “borderline retarded.” I didn’t say it! I put it in quotes. Smiley face.

In-laws are the worst, but unfortunately the three of us are completely codependent on each other. We’re the rooster representatives of America, for better or worse. At least we’re not from France. I hate that dumb cunt Bécassine: oh, so you’re an airheaded housemaid from Breton? And you’re clumsy? How charming. More like “fully fucking retarded”.... I didn’t say it! I put it in quotes.

Would we fit in on the milky pages of Family Circus collections? Probably not, but I wouldn’t want to hang out with those brain-dead incels and idiot children. I’d rather smoke PCP with Fritz the Cat and get fucked up with Felix. I can drink Bullwinkle under the table, but Rocky… oh my, Rocky… he smokes too much meth. Rocky, Rooster, and I almost had a threesome once but his breath smelled so bad and he had so many open sores on his body that we were out the door before he could even offer us any of his crank.

Bennington later raped Rocky, naturally. It’s just in his nature to plagiarize and rape. Which is worse? I mean, it’s debatable… at least when you’re talking about an annoying fucking flying squirrel. He reminds me of the Roadrunner, who I also hate—a self-righteous ice queen who mercilessly tortures the vulnerable and disturbed enemy coyote. I’ve seen Mr. Coyote break down in the desert: “WHY AM I DOOMED TO REPEAT THE MISTAKES OF MY PAST?” He suspected but wasn’t sure if he had no free will, and I gently let him know about the hamster’s wheel he was on for eternity. He attempted suicide, so I pumped his stomach and put him in one of our special “hospitals.” I left him flowers, a card, and some “custom medicine” to aid in his fight against the cunt Roadrunner.

Maybe one day he’ll win and skin that stupid bitch alive. But maybe that’s just as unlikely as Bennington giving up his lecherous habits. Maybe it would be best to put them both out of their misery and take them out of syndication. Will Bennington ever write again? We’ll see, but it’s doubtful… how can he write if he has no voice? Let’s just say I’m planning something special. Smiley face.