I’m reasonable, but I will hurt you if necessary. 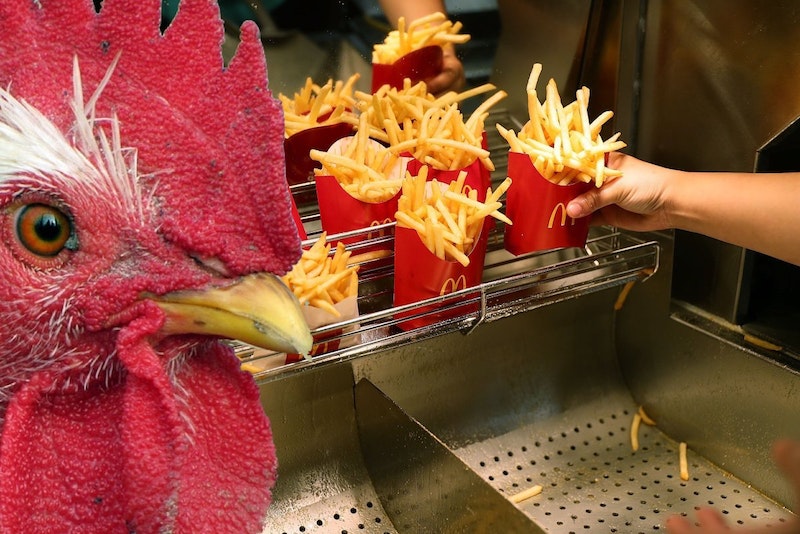 I was feeling a little down yesterday. Depressed, you say? No: I’m too proud to ever be sad. I’m not my husband, who’s an artist, and therefore prone to bouts of extreme emotion. These include sadness, melancholy, depression, anxiety, and suicidal ideations. Sometimes he feels okay, like when I’m at home and we’re in bed watching Terrace House. He’s been more productive than usual this week, probably because his deadline is coming up. “When are we going to get to read his novel?” Um, when he fucking finishes it, sweetie. Literature isn’t a four-letter word; it’s not something that just anyone can pull off. He’s an artist, like I said. So he needs his rest and medication. Some of these medicines are legal; some aren’t. This is simply how it is: I do not judge. At least, I try not to make a habit of it.

But I’m having a hard time containing my “enthusiasm” after reading this inspiring story out of Georgia: an unnamed woman in Garden City went to McDonald’s on Monday for a simple meal. A SIMPLE MEAL! What exactly does that entail? Well, I’m not sure; the story doesn’t specify what my new hero ordered for lunch—except that she received cold fries in exchange for her cold hard cash. “The restaurant owner says a woman left with her order and then came back saying the fries were cold. According to the owner, as the manager went to get new fries, the woman went into the kitchen and fired a shot into the floor. The owner says he gave the woman a refund and she left.”

The owner gave her a refund! She may be in police custody now, but she went in peacefully when pulled over by police shortly after her heroic lunch. She’ll make out fine, but if she doesn’t, I pledge to go down to Georgia and break her out. This woman did nothing wrong. She paid for a meal, she was handed garbage. Disrespect. Disgrace. Demeaning. I’m sure they took one look at her and decided that no, she doesn’t deserve our piping hot golden French fries because she’s a woman. She should be fine with a salad and ice water. She doesn’t need any more carbs or salt. This is where they made their mistake, and these are the enemies you make.

I fired a gun in a McDonald’s once. It wasn’t as cool as this, it was in self-defense. There was some sort of escape at “the zoo” that day (figures…) and the rhesus monkeys were balling out, just going wild all over our hamlet. They stormed the McDonald’s demanding treats, and the employees ceded. I was there picking up snacks for my husband (NO CHICKEN MCNUGGET JOKES OR I WILL SPUR CLAW YOU), and one of these rhesus fucks tried to accost me and steal my food. I shot him point blank in the face. I fled the scene of the “crime,” it was a pretty messy self-defense situation, and I let the employees, police and the therapists clean up the blood, brains, and PTSD sprayed all over everyone in my immediate vicinity.

I don’t regret obliterating the head of a rhesus monkey with my .45. I’m a badass bitch and I’ll do anything to protect my husband’s food. Those monkeys have diseases anyway, they shouldn’t be anywhere near a McDonald’s, zoo or no zoo. People ask me why I haven’t “liberated” more zoos. Please. I don’t sympathize with my captured and pacified “brethren”—to me they’re no less disgusting than the untouchables of India. Honestly they get a raw deal; it’s the rhesus monkeys that are the real bastards. I’ll choke the next one I see, innocent or not.

Okay, maybe I should relax. I’m starting to feel a little too Charles Bronson and it’s not even Thursday yet. Maybe RooRoo will finish his book this weekend, but also maybe he won’t. I won’t bother him because that is not my job, and if you ask me anything ever again—even the time—I’ll blow you away like I did that stupid monkey. And remember: it’ll be messy.