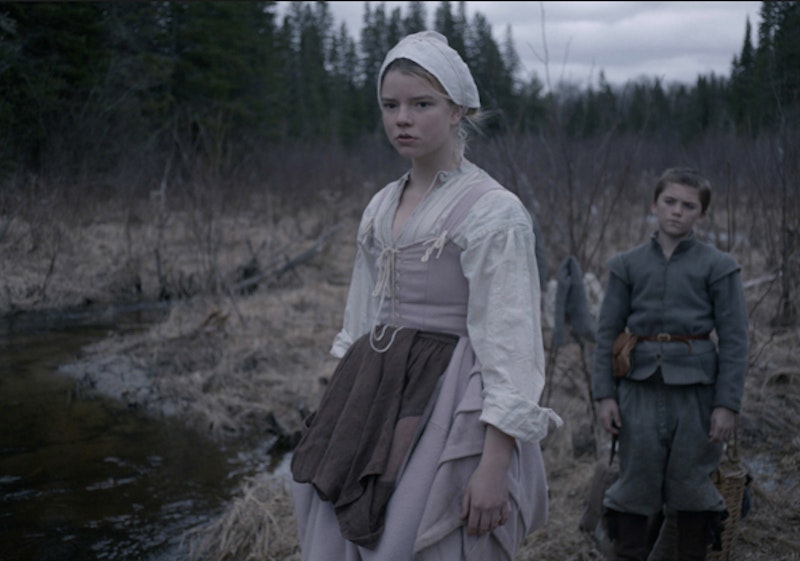 I didn’t watch the Oscars, but I’ll tell you one recent film I already hope gets a Best Director or Best Screenplay nomination next year: The Witch. Maybe I’m just biased by my New England upbringing, but I always thought there was immense, still mostly-untapped horror potential in those 17th-century Colonial days—a few tiny bands of hardcore Christian fundamentalists wandering dark woods, living on the brink of starvation, at odds with the elements, the natives, and the European continent they’d left behind.

And oh, the superstitions! The beautiful Devil’s Hopyard state park one county west of where I grew up was named after a black mark on a big rock there that the locals long ago thought was a melted hoof print left by Satan. There’s a marvelously simple, rustic quality to some of those old superstitions, plainly created by people who had rarely seen things more complex or exciting than spinning wheels, butter churns, and cousin Jebediah having unexplained convulsions. This is a sparse canvas upon which starkest terror can easily be written, or at least a Shyamalan or Lynch scene.

In later centuries, the region would of course spawn rationalists, Ivy Leaguers, Unitarians, transcendentalists, and optimistic reformers aplenty, as alluded to in my most recent column—though also Stephen King and H.P. Lovecraft. The universities aren’t far from the scary woods, so to speak (just ask the doomed souls shivering at Dartmouth). However, I draw the line at seeing another stupid movie about the Warrens, those bogus Connecticut “ghost-hunters” lionized in The Conjuring and its imminent sequel. I admit I went to see them speak as a kid once, but that doesn’t mean they were anything more than the latest iteration of generations of (post-Revolution) New Englanders who built careers out of creaky floorboards and blurry photographs.

Anyway, if people like The Witch, I’ll be pleased as a matter of regional pride. The fact that the hashtag #WitchHillary is now trending (due to increasingly censorious Twitter trying to shut down the tamer #WhichHillary hashtag) might inadvertently boost ticket sales a bit, too, I suppose. (Let us pray for sexy Hindu surfer girl and political heretic Rep. Tulsi Gabbard of Hawaii while we’re at it, since she dared to resign from the Democratic National Committee and endorse Bernie Sanders, just as it’s looking like Clinton has this thing all sewn up. I’ll take eclectic and postmodernist politics over the Clintons’ routine corruption, in most cases.)

Finally, as just one little example of The Witch’s authentic feel, I note that Christine Caldwell Ames, author of the great book Medieval Heresies, says the creepy goat briefly standing up on its hind legs, visible in the trailer, is a classic medieval Satan symbol. Is it any wonder the film got an endorsement from the Church of Satan? (My fellow Splice Today contributor Alan Cabal probably ought to see it on that basis alone.)

To compensate for all the darkness above, though, and particularly the goat, I leave you with a link to a more upbeat strange-beast tale: the pony dressed as a unicorn who led California cops on a long chase. I’m just amazed the cops didn’t feel threatened and shoot it, as seems to keep happening. And I should clarify I’m not usually a horror movie fan. I’m a lot more like these teenagers (brought to my attention by Jeffrey Wendt) who are excited about the imminent Captain America: Civil War and are already wrestling with its libertarian political implications.

However spooky or politically-combative things may get here in America, though, always remember we do not want to go back to Europe, especially not us nerd film fans, since (as Sean Dougherty informs me), they’ve begun euthanizing the autistic there. Indeed, it may be time to flee deeper into the woods’ embrace.