The Daughter of Laura and Floor

Figuring out the kind of woman I want to be. 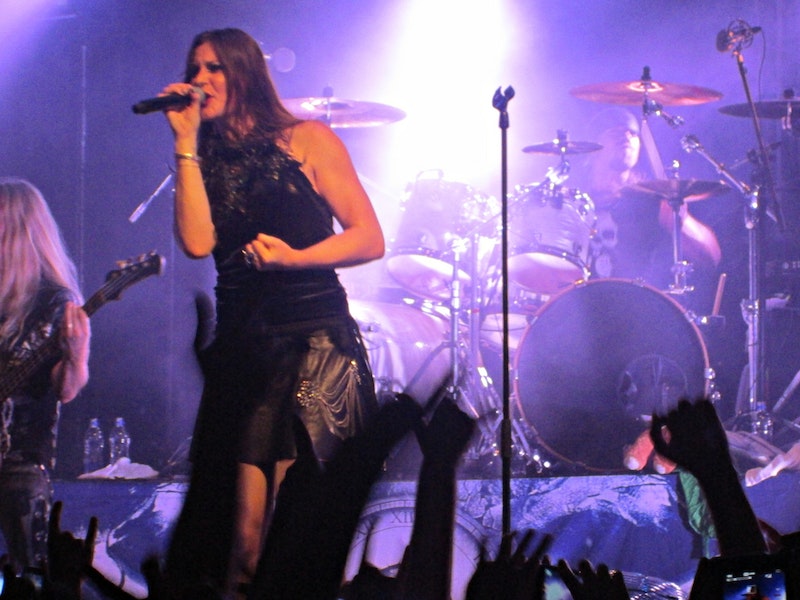 After my punk breakdown while seeing Laura Jane Grace the night before, I somehow managed to pry myself out of bed the next morning. I’d fallen getting home, so my hand was skinned, my new gloves were missing, and my pride was wounded. If I hadn’t bought a ticket to see Nightwish in New Jersey’s Starland Ballroom, I might not even have gotten out of bed all day. Thankfully, I managed to slap on some makeup and my customary jet-black outfit to make the trek; what awaited me there brought my sense of self-worth back from the brink, and realigned how I approach my own identity.

I’d already seen Nightwish before, when they arrived on our shores from Finland in 2015 to introduce Floor Jansen—the band’s third singer, with whom I’d become familiar through her work as vocalist for After Forever. She was incredible, as expected, and I felt drawn to her for reasons I didn’t yet understand (but which made a lot more sense after I admitted I was a girl later that year).

Floor’s first album with the band, Endless Forms Most Beautiful, came out soon after. The title comes from a Darwin quote: “From so simple a beginning endless forms most beautiful and most wonderful have been, and are being, evolved.” I was in a state of evolution when the album came out—”explod[ing] the self to epiphany,” as Floor croons on the opening track, “Shudder Before the Beautiful.” Having listened to the full album nearly as much as Transgender Dysphoria Blues during the last year, I was more than a little excited to see her again—but this time, I’d be presenting as myself for the first time at a large-scale concert.

I wasn’t the only one; among the people who accompanied me that night was my dear friend Caroline, whose love for Floor knows few—if any—bounds. Shortly before joining Nightwish, Floor suffered from extreme burnout, which she describes as being ”literally unable to do anything” for well over a year. “As someone who also went through that particular basket of laughs, I know it ain’t easy,” Caroline told me after the show. “But it is inspiring to see her come back so powerfully, to be so vocally versatile, and so magnificent.” I was quick to agree; dysphoria isn’t the same as a complete breakdown, but being paralyzed and unable to go anywhere I might see or interact with people is a sensation I’m all too familiar with. Even though Floor didn’t know I existed, I was excited to share a mutual triumph over mental blocks.

From the first moment she took the stage, though, I was reminded that Floor is in a totally different class than me when it comes to regaining confidence. Her blue dress, adorned with quietly kinky white straps and arm cuffs, was only the second thing I noticed about her outfit—the first was her cape, a gauzy affectation that seemed to glide along her arms as the band swung into “Shudder.” She looked like the Bondage Queen of Faerie, and I was all too eager to fall under her spell.

But as Nightwish raced into their second number, “Weak Fantasy,” something began to change about the way I perceived this show. “Fear is a choice you embrace,” Floor sang, and suddenly the worst cliché ever written about live music came true: it was like she was singing to me. I’d zeroed in on that lyric countless times before, but in that moment, I perceived it in a more visceral way than I could through mere headphones. Combined with Floor’s commanding, otherworldly stage presence, it kickstarted gears in my head, and while my eyes and ears remained rapt through the rest of the performance, a part of my mind was very far away.

Before that night, I hadn’t given much thought to what kind of woman I wanted to be. Simply stating that desire in its purest form took enough energy. Floor changed that. Her onstage litheness, the delicate way she owns a stage without seeming to try, only to step back and headbang for all she’s worth during a particularly blistering keyboard solo—that inspired me; as Caroline likes to put it, “I feel like I’ve taken person-in lessons from her.” I knew then that I wanted to live my life as a woman with that strength of will and ineffable pride of self. But I realized that this epiphany didn’t exist in a vacuum—it had been building since the previous night, when Laura Jane Grace casually reached into my soul and squeezed. Laura made me want to live with intensity and intent, to have the courage to bare my soul in as many different artistic ways as possible, and not to put up with any bullshit along the way.

My mission, then, was defined. As I transition, I want to be the daughter of Laura and Floor: my passion guided by elegance, my ragged emotions tempered with confidence. I’ve gone from aimless pursuit of a goal some claim is unattainable to purposeful pursuit of an existence I know is within my reach. And the reason I know is that the avatars of my new identity appeared before me, one after another, in settings that could not have been more different but which embodied them both. And when they came, they bore the same message: Hey girl. Join us?