What About This “Cat Person” Story? 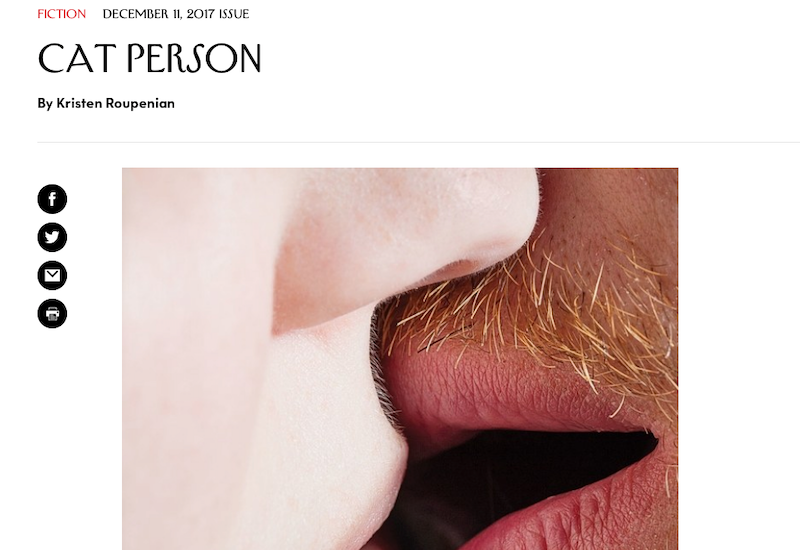 The Weinstein era has shown us the swamp that sex can be when powerful men set about trapping women. “Cat Person” takes us a step further. What about date sex, pre-couple sex? A man and a woman don’t know each other that well, but they think they like each other and they fuck. What about them? Bad news. “Cat Person” says date sex isn’t a vast terrain with a far edge that abuts the swamp. No, date sex is adjacent. It’s right next to the swamp. She’s in bed with that guy, the woman’s in trouble. The trouble may not show up in the overwhelming, direct manner she sometimes fears (“as they got on the highway, it occurred to her that he could take her someplace and rape and murder her,” “all the other rooms in the house were empty, or full of horrors: corpses or kidnap victims or chains”). But show up it does.

“Well, at the end of the story, Robert calls Margot a ‘whore,’ so I hope that most people lose sympathy for him then,” says the story’s writer, Kristen Roupenian. In other words, the story finishes by establishing that he’s the problem.  For the first two-thirds, space is maintained. Perhaps Robert is “clueless but well-meaning,” as Roupenian puts it. For the last third, benefit of the doubt vanishes. The narrator sets up a negative cheerleading: “She imagined herself from above, naked and spread-eagled with this fat old man’s finger inside her,” “he kept losing his erection, and every time he did he would say, aggressively, ‘You make my dick so hard,’ as though lying about it could make it true. At last, after a frantic rabbity burst,” and so on. Then comes the clincher, the story’s final line: he sends a text reading “Whore.” Nobody can read the story without seeing that Robert’s a loser. In fact establishing his loserdom is the story’s payoff.

Fancy stories, stories in The New Yorker, are thought to maintain a balance. They don’t tip their hand. The reader must infer. To be explicit is to be blatant, like ketchup dropped on filet mignon. “Cat Person” plays it that way at first. It’s muckle-mouthed and noncommittal in the MFA fashion—which isn’t such a bad thing. That’s a skilled game, as the story demonstrates. But then the boom gets lowered. The story breaks from cover and goes advocacy.

That choice makes “Cat Person” a landmark, at least for me. From before I was born, the creed held that high-class literary appreciation was a matter of holding back. Meaning was not something one lunged at. J.D. Salinger’s “Franny” had people asking why the girl cried in the ladies room. Shirley Jackson’s “The Lottery” had people debating why the crowd stoned the lady. But “Cat Person” wants to be perfectly clear, and it takes sides. By doing so, it creates a puzzle for the men, a new wrinkle in the social landscape. A high-class New Yorker story now holds that top-drawer thinking isn’t a matter of restraint but of being pro-female. Did that turf just get occupied? Yes, it did.