The Metal Men as confused allegory for the oppressed. 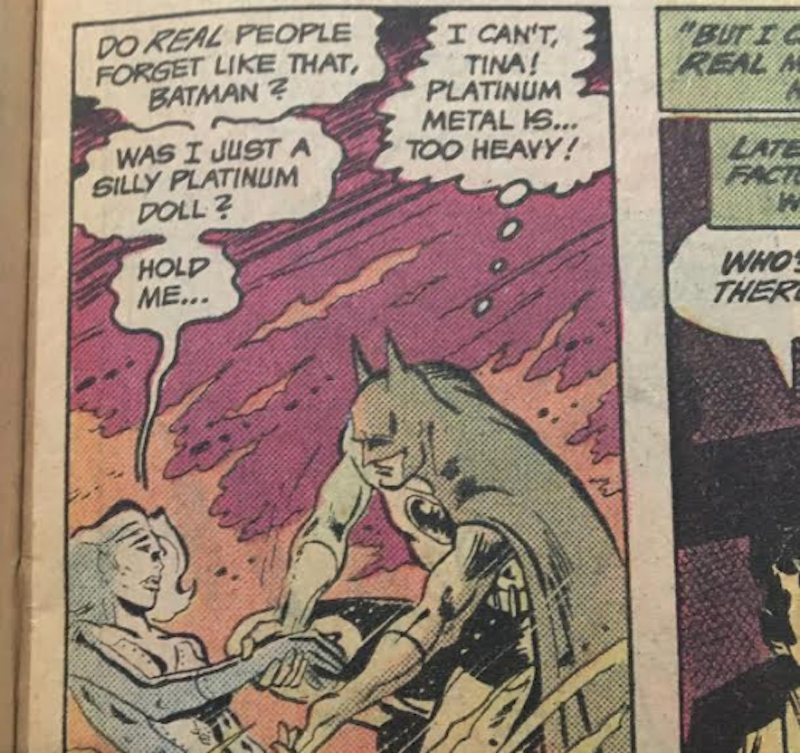 This is part of a series of posts rereading comics from my childhood. The last one is here.

"Batman and the Metal Men: Whatever Happened to What's 'Ername"

I first read Brave and Bold more than 35 years ago, but still have oddly clear memories of it. In particular, there's one panel that stayed with me. Batman leans over Tina, aka Platinum, one of the robot Metal Men, who's been badly injured by a supervillain attack. Fire laps around her. "Do real people forget like that, Batman?" she asks. "Was I just a silly platinum doll? Hold me." To which Batman silently replies in a thought bubble. "I can't, Tina! Platinum metal is… too heavy!"

It's a weirdly touching moment, in part because the pathos is so goofy and awkward. The wonderful Jim Aparo draws Tina in a half-sitting position, but you can't really see what she's sitting on, while Batman holds her hand in vain. Even though the image is fairly small and Batman's wearing a mask, Aparo manages to give Batman a furrowed brow that suggests real distress. And of course, there's the dialogue, in which Batman helpfully explains the properties of platinum to the young reader, while regretting that he can't help his dying friend. Comics; they are sad… and educational!

That image sums up the rest of the issue, in both its pathos and callousness. The comic is, like the cover says, a team-up between Batman and the Metal Men. The Metal Men are a group of shape-changing robots constructed by a scientist named Doc Magnus, who built them out of various metals: Gold, Lead, Platinum, Iron, Mercury, and Tin.

In this story, the Metal Men are attacked by a number of their former enemies (like the Gas Gang). These old foes claim to be out to revenge Nameless. The Metal Men don't remember who Nameless is, but Batman does; she was a female robot created by Tin to be his companion. She disappeared shortly after a number of Metal Women created by Magnus fell into a lava pit and died.

It turns out that Doc Magnus tried to destroy Nameless. Badly injured, she ran away, and fell into the pit where the Metal Women had disappeared. There she met Platinum Man (the one male Metal Woman) and the two of them repaired each other. Platinum Man fell in love with Nameless, and determined to get revenge on Magnus by killing him and the Metal Men.

Magnus programmed the Metal Men to forget Nameless existed. But Batman intervenes, allowing the robots to remember. Platinum attacks again, but Nameless returns and tells him to stop attacking her friends. Then Tin and Nameless marry… but seconds later a bomb goes off, and Nameless sacrifices herself to save Batman, Magnus and the Metal Men. Tin looks off wistfully crying, and that's the end.

As a kid when I first read this, I found the story unsettling and unsatisfying. And in retrospect, I had good reason. The Metal Men in the narrative are positioned as a metaphor for marginalized people. When Batman first sees a Metal Man—Iron—on the first page of the book, he's careful to explain that while the Metal Men aren't actually human, "They're real heroes—better than a lot of people!" When Doc Magnus says he's pleased that the Metal Women were all killed, Batman is horrified.

Magnus treats the Metal Men like things; he decides to kill Nameless because she annoyed him; no other reason is ever given. Then, after almost destroying her, he casually wipes the minds of the other robots to cover up his crimes. He's basically a vicious mad scientist supervillain—much like Dr. Frankenstein. And like Dr. Frankenstein, his supervillainy has racist overtones. The robots (like Frankenstein's monster) are different, and because of that, Magnus treats the as inferior, and subjects them to medical experiments.

Again, Batman realizes that Magnus is a bad guy, and so does the comic—sort of. Batman does insist the Metal Men are equal; he condemns Magnus; he restores the robot's memories. Yet, the story never makes Magnus pay for his crimes. The only person who suggests that Magnus should be punished and shunned is the Platinum Man, who, with justice, calls Magnus "robot killer!" He gives an impassioned speech indicting Magnus: "You left Nameless and me to die! How many other robots have you abandoned after growing tired of them? We're not experiments—we're alive! You only rebuild your precious metal kids!"

But the Metal Men just sneer at him and reiterate their loyalty to Magnus. Even Nameless reprimands Platinum for his revolutionary rhetoric—and then sacrifices herself for the racist who hated her, like she's some sort of tin-plated Gunga Din.

Batman's supposed commitment to robot rights is also less than perfect. When he learns that the Metal Men have forgotten Nameless, he becomes enraged, spouting what are essentially racist epithets. "Are you just machines!? Have your memories gone blank like old recording tape?!" he shouts. If the Metal Men were human and he found out that they'd had their memories wiped, he'd suspect foul play. Since they're robots, he leaps to the conclusion that they're inferior. Of course, it turns out that the memory loss was not their fault; Batman is blaming them for the injustice they suffered. Which is how prejudice works.

Even after Magnus' scheme is revealed, Batman doesn't apologize for his cruel comments. For that matter, Magnus never once expresses regret or any desire to change. Nameless sacrifices herself to save her killer—turning into a tin dove to ferry away the bomb no less—but there's no political moral or transformational message. The Metal Men still, bizarrely, love Doc Magnus, who’s still, for some reason, supposed to be seen as being on the side of the angels.

Batman can't hold Tina, because she really is different—and he's ultimately more interested in explaining her difference in informational soundbites ("Platinum is too heavy!") than actually bridging it. The Metal Men are infiltrated by anti-robot ideology; they’re brainwashed, and even when they discover that they've been abused, they can't find a way to declare solidarity with others who’ve been oppressed. The adventure ends with the status quo restored; Batman doesn't take the bad guy away because Magnus is his buddy, and the cops don't prosecute racists who are their friends. It's a bleak message to put in a comic for a 12-year-old. I guess that's why I remembered it.