The Darkness of the Stone Age 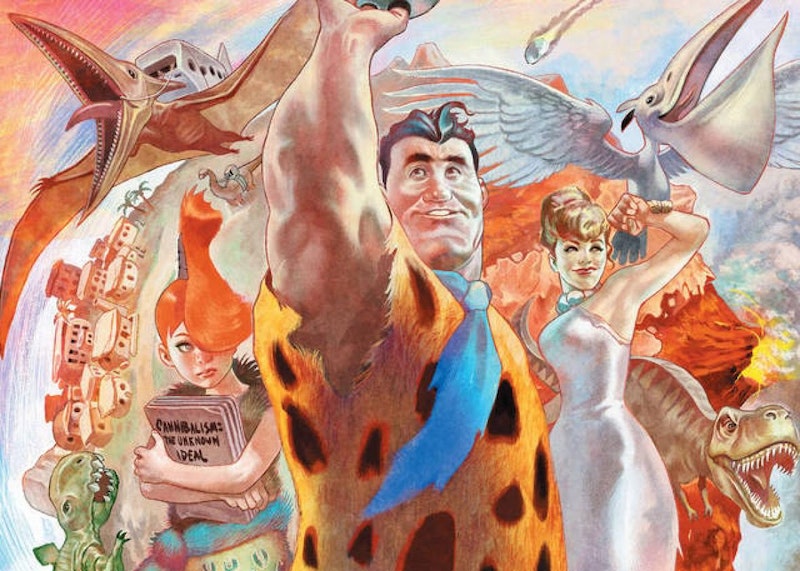 I remember the Flintstones as a cartoon cigarette commercial from Hanna-Barbera that had the power to ruin the childhoods of my peers. But I've heard positive reviews for the recent Flintstones comic book by DC comics. Given that I tend not to read many mainstream comics (the last graphic novel I read was Persepolis, which I wholeheartedly enjoyed) I was surprised at how well DC managed to handle a darker take on the source material.

The comic is a smorgasbord of modern day satire, deconstructing modern consumerism, racism, and sexism. Other themes touched on include the mistreatment of veterans and soldiers. Fred and Barney end up fighting a war under false pretense, which Fred discovers when he finds a child's toy on the battlefield. The innocuous “yabba-dabba-doo” becomes a term used for coping with tense situations.

Other subjects talked about involve the exploitation of the Neanderthal people. A group of aliens treat Bedrock like a spring break destination (known as Galactic Break), damaging property and callously murdering people. Wilma's attempts to rise as an artist are met with casual sexism flung about by curators until she's eventually discovered by a film producer. Even the animal appliances get fleshed out, creating a complex relationship between the animals and the human characters. The animals band together in solidarity, mourning the loss of the elephant used as a vacuum cleaner.

The comic is clearly meant more as an interpretation of our status quo through the lens of familiar characters. It does not mean to connect itself to the older animated series, but that's to the benefit of the story. Every issue is so dense with layers of satire and humor that it manages to convey a lot for a very short read. But even after you put it down, the imagery and writing stays with you far longer.