One of the Best Games I Never Played

Thoughts on a casual game I could’ve played but didn’t. 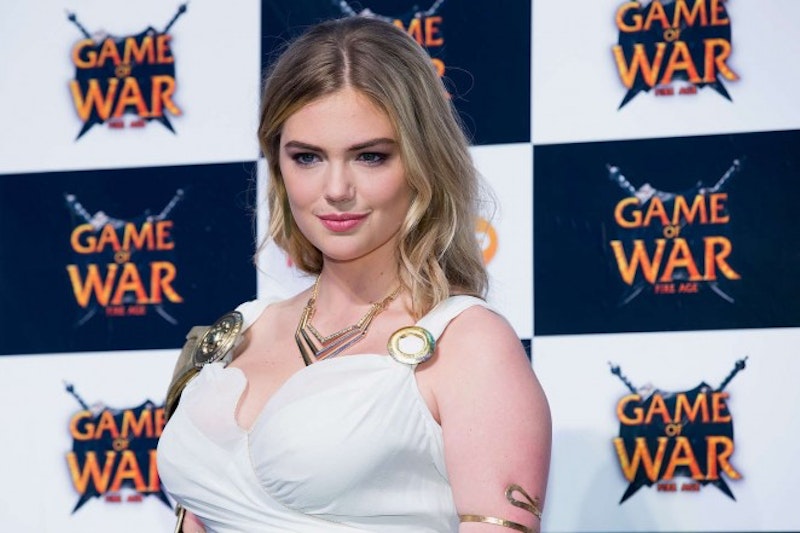 Kate Upton’s Game of War, a game I almost played yet never will, was advertised so much on Twitter that I started to believe I had. Me, of all the people that ever were and ever will be, proving himself as gullible as a soon-to-be-disgraced rube Congressman from a rural district! Goes to show and shows to go, am I right?

There’s a certain wonderment, an infant joy even, that’s lost when you have to stop believing in whatever you think something is because you’ve actually tried it. I felt this way when I began to watch Friends, the TV series that was just Seinfeld but with prettier, sweeter people in nearly identical roles to George, Elaine, Jerry, and the rest of the gang (Lisa Kudrow as the Puddy character, et al.). Say, did you know that David Schwimmer, the erstwhile Ross of circa 1998 Ross and Rachel fame, patterned his character on a series of Nicolas Cage acting performances from the 1980s? It’s true, it’s true, as Olympic gold medalist Kurt Angle used to say before all the pro wrestling-induced concussions so racked his brain that he couldn’t even tie his shoelaces without the assistance of a nursemaid.

But back to Kate Upton’s Game of War. Could this be an autobiographical game, your own chance to experience Kate Upton’s battle to become America’s Next Top Model on the Project Runway against all odds, evens, and the withering comments of catty judges Tim Gunn and Simon Cowell? Or could it be a game in which the object is to woo the fair Mdme. Upton, affiancing her against the best wishes of her thousands of swains (among them Joel Embiid, Danzig, Jerry Seinfeld, Channing Tatum, Brandon Lee, Christopher Meloni, Tilda Swinton, John Kruk)?

Or maybe it’s just the same game as a million other games: Candy Crush Saga Kingdom meets Mafia Wars with Warcraft 2-generation graphics. Maybe it’s turn-based and doesn’t require the least bit of skill, thus making it “casual.” Maybe there are upgrades that you can buy to speed things along. Maybe that’s all it is, a giant slot machine that generates money for its cynical creators. Maybe it’s Maybelline.

But how much money could they be making from this, given the amount they spent promoting it? Surely they’ll never recoup the costs associated with Kate Upton (she’s priceless!). Perhaps, then, this is just a labor of love: Kate, we love you so much that we want you to have a game that is yours. We believe in you. You don’t have many years left before you hit the Crawford Line (roughly age 31, at which point the Weinsteins of the world remove you from the stage you’ve been strutting and playing upon). You have to make these last days and minutes and hours and seconds count.

“Grandpa, where do people go when they don’t go anymore?” I never asked (my old man was something of a rat bastard and hated being questioned by anyone, especially his ungrateful progeny). “Grandson,” he never said.

“You were dead, you were sleeping the big sleep, you were not bothered by things like that, oil and water were the same as wind and air to you. You just slept the big sleep, not caring about the nastiness of how you died or where you fell.”

Which is what Raymond Chandler wrote years ago, and I like to think it’s something my grandfather would’ve said, if he had spoken passable English and ever bothered to say anything to me that wasn’t “hey you shit-for-brains.” Oh, Gramps! What a gas you were. What a kidder. I never believed all the bad things they said about you, and boy there were plenty. You had a good heart and a secret soul that only I ever got to see.

But my grandfather long ago kicked the bucket and bought the farm, leaving me a prisoner of Kate Upton’s Game of War. I go to bed at night and wonder: could this have been the one, the one that changed everything? Each day we ask ourselves that, about so many things, and it puzzles me as to why. We want to change our life from one thing to another, but once your FICO score soars above 800 (mine is 808), isn’t it smooth sailing until they put you in a pine box and bury you in a potter’s field? You lock eyes with your beloved-to-be in the supermarket or atop a counterscarp in Kate Upton’s Game of War and think to yourself: “Could we live happily ever after?”

What comes after ever after, alas and alack, is more of the same: an endless desire to change that isn’t a desire to change at all. Desire, in fact, isn’t the desire to be desired, pace Lacan; it’s merely a wish to just rest, to strip yourself of all cares and concerns, and to live in an imaginary now that is instantly, instant by instant, the future. You can’t, though, can you? You always want something else, something which isn’t anything at all and never can be. You want Kate Upton’s War and Peace, but you’ll only ever have Kate Upton’s War.