Balthus' Thérèse Dreaming should stay at the Met. 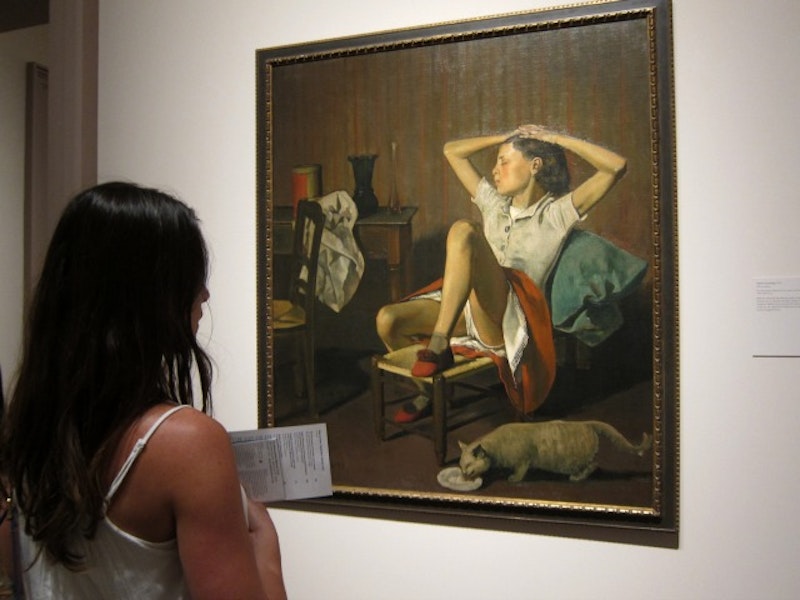 The most recent attempt at censorship came from a petition started by Mia Merrill. Merrill complained about a painting that’s housed at the Metropolitan Art Gallery titled Thérèse Dreaming by a Polish-French painter known as Balthus.

In the petition, Merrill states that the painting “is an evocative portrait of a prepubescent girl relaxing on a chair with her legs up and underwear exposed.” She goes on to say that the image is “disturbing,” and that Balthus “had a noted infatuation with pubescent girls,” and finally, that “given the current climate around sexual assault and allegations,” the gallery is “perhaps, unintentionally, supporting voyeurism and the objectification of children.” Merrill claims that she’s “not asking for this painting to be censored,” but only for the gallery to consider the “implications” of having such a painting on display.

She even offers a practical solution: “This can be accomplished by either removing the piece from that particular gallery, or providing more context in the painting's description. For example, a line as brief as, ‘some viewers find this piece offensive or disturbing, given Balthus' artistic infatuation with young girls’.” But these claims fall flat since she’s using euphemisms to ultimately censor the painting.

Notice the progression of her argument—it begins with the image and its description. Then, she makes a judgment about Balthus’ personal life, and ends with the main reason of why the painting should be removed.

On the surface, Merrill’s intentions are not necessarily evil. Censoring art (or banning books) can come from a totalitarian impulse, which involves political action that attempts to control people. Clearly, she’s not of that persuasion.

Another impulse is moral, which could be said of Merrill’s case. Her intentions are good and they’re in some way driven by the need to be compassionate and caring toward others. The problem lies not with the question of whether Merrill is a good person, but with the fact that she is demanding the freedom of both the Metropolitan Art Gallery and their viewers be curtailed. The demand is based on a feeling that the painting will offend people’s delicate sensibilities and send them into a psychologically damaged frenzy. Should the libraries and bookstores then eliminate Nabokov’s Lolita as well?

The petition is forcing us question of how we look at art. Is our lens ethical? Are we always compelled to make a moral judgment on either the painter or the subject of the painting? What kind of assumptions are we making about the artist’s personal life and are these assumptions (or facts) coloring our view of the painting?

On the other hand, is our vision purely aesthetic and do we possess a healthy dose of “disinterestedness” with no regard for morality?

It may be helpful to note that Balthus’ brother, Pierre Klossowski, has expressed similar subjects in his writing and philosophy. Along with the French writer and philosopher Georges Bataille, Klossowski is considered by many to be an intellectual heir to the Marquis de Sade. Both brothers have some kind of intellectual investment in toppling the existing order of things, especially in the realm of human sexuality.

I’m strongly against censoring anything, especially artistic and intellectual expressions. It’s far worse when censorship is political and totalitarian in nature but Merrill’s point of view is hardly to be ignored. It’s filled with false morality, compassion, care, and trigger warnings and it’s a killer of creativity and freedom. I wonder whether she feels the same way about, for example, Goya’s The Third of May 1808, which depicts violence and murder. It’s rather curious that our attempts at censorship almost always involve sex and human sexuality but rarely war, murder, and violence.

After that deliberation, a judgment may be formed, but not in the act of censorship. Rather, a well-reasoned and philosophical argument is needed in order to determine what makes art “good” or “bad” in both the ethical and aesthetic sense. This may not mean then that art is purely subjective—that’s an entirely different topic and argument—but at the very least, it serves as a good beginning for a conversation.