The public has the right to ask the Met for accountability. 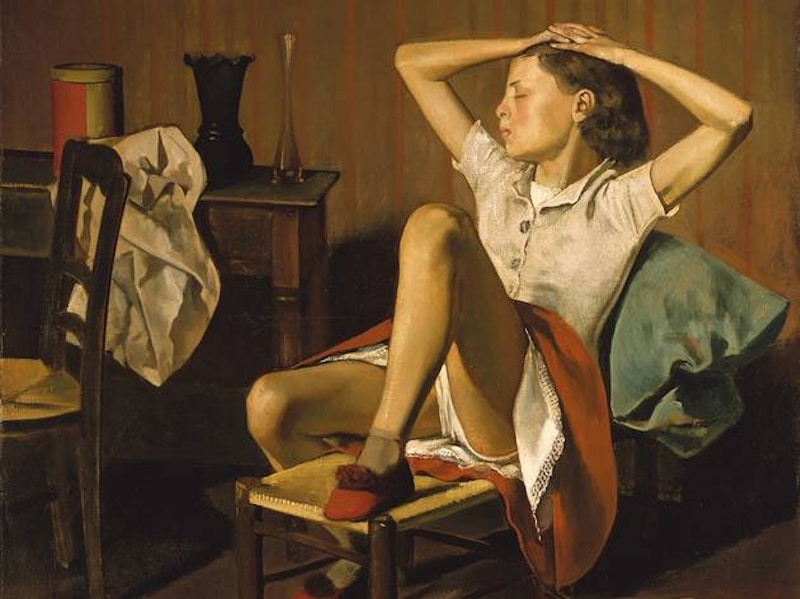 Imagine that a painting—say, a 1938 painting by Balthus hanging in the Metropolitan Museum of Art in New York—was revealed as a forgery. Nothing has changed about the painting except that it isn't authentic. The curators decide to remove it from the museum's wall. Is this censorship?

Just about everyone would answer this question negatively. Curators are expected to evaluate the historical and aesthetic quality of the work they put on their walls. Museum space is limited; you can't show everything, or even everything in the collection, all at once. Deciding to take down a painting if new information becomes available about its provenance is a non-controversial decision.

The Balthus painting in question, Thérèse Dreaming, is not a forgery. But many people have argued that it should be taken off the Met's wall. Mia Merrill is a New Yorker who started a petition asking the Met to consider removing the painting—or provide additional context in the wall text. The petition has garnered some 9000 signatures.

Merrill is hardly the first to criticize Balthus, who "devoted a career to obsessively depicting female pubescent sexuality," as art critic Christian Viveros-Fauné said. Thérèse Dreaming shows a young girl in a sexualized pose, allowing the viewer to look up her skirt. The girl in question was Balthus' neighbor, who was 12 or 13. It's a voyeuristic image; the artist and the viewer conspire to spy on a girl who doesn’t know they’re looking, and doesn’t intend to display herself. You, as the viewer, know what the girl doesn’t—that she’s sexual, and is on display. It's an image that trades on power differentials; you're supposed to be excited, as an adult taking advantage of a young girl and as a viewer taking pleasure from the unwitting object of your gaze.

There are ethical issues with sexualizing young girls for the entertainment of an adult audience, but the Met condescendingly refused to address these in its response. Instead, it said in a statement that its mission was to "collect, study, conserve, and present significant works of art across all times and cultures in order to connect people to creativity, knowledge, and ideas."

That’s hardly responsive. Of course the Met presents work from all times and cultures. But it doesn't present every work from every time and culture. My stick figure drawings aren't in the Met. Someone decided that Balthus was especially valuable. The petitioners are questioning that. The best the Met could counter was the insistence that "Moments such as this provide an opportunity for conversation." It's true; conversations about childhood sexuality and childhood sexual exploitation are important. But is a shot of an underage girl the best way to provoke those conversations?

None of this is to say that the Balthus painting should be removed. Merrill herself doesn't argue that it should be. She says she'd be happy if the Met included a note beside the painting acknowledging that Balthus' art often sexualized young girls and pointing out why that might be a problem. The Met presumably wouldn't (or at least shouldn't) hang Nazi anti-Semitic cartoons on its walls without providing curatorial context. It's not out of line to suggest something similar could be helpful here.

And yet, people have run to the ramparts to defend the Balthus painting from the free speech of its critics. Nora Pelizzari, spokeswoman for the National Coalition Against Censorship, worried about "the escalation of the culture of outrage" and insisted that "Everyone is allowed to react to art in exactly the way they naturally do"—which, again, would be a funny thing to say about Nazi propaganda or blackface caricature. For that matter, it would be an odd thing to say if the Balthus painting were a forgery. Would Pelizzari chastise the Met for removing a fake on the grounds that people should be allowed to view paintings sans context and make up their own mind if the painting is real or not?

No doubt Pelizzari would insist that these are different cases. But they're not that different. Art is placed on the walls of museums because someone decides the art is valuable. That evaluation of "value" is based on lots of factors—historical importance, formal qualities, subject matter. All of those go into an estimation of aesthetic worth, and a decision about whether to show this and not that. Merrill is using her right to free speech to say that she thinks the Met got that decision wrong in this case. How is that different from criticizing a book or a film—or from saying, "This film is so bad it shouldn't have been released"? If you say Suicide Squad was a piece of crap and that it's so lousy it doesn't even deserve a video release, are you engaged in censorship? How is that distinct from what Merrill is doing?

Part of why it's distinct is sex. Sexuality has been heavily policed throughout history, and non-normative sexuality has in particular faced government and public scrutiny. It's reasonable to be concerned about the consequences of stigmatizing sex. But it's also worth pointing out that unthinkingly linking sex and freedom in all cases has historically led to an ideology in which "liberty" often means "liberty for men to do what they want to women without consequences." Who is free in that Balthus painting? The girl supposedly exploring her own sensuality? Or is it Balthus and the viewer, who are free to look at a sexualized child, enjoying the illicit charge?

Choosing to hang Balthus at the Met isn't a neutral commitment to aesthetics and freedom. It's a particular choice with particular meanings. Asking the Met to clarify those meanings on its walls isn't an imposition. It's asking for marginal accountability. Why does the Met think this is great art and not a fraud? Why is this worth looking at? The Met should include text that attempts to answer that. And if it can't, maybe it should take the picture down.