On the phenomenon of mobile barbershops. 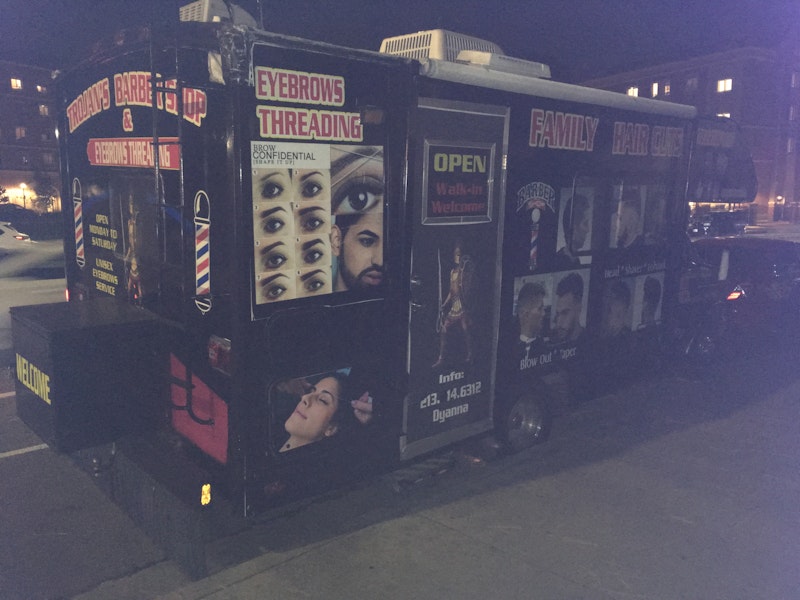 On my walks home from campus toward the end of last semester, there was a mobile barbershop parked on the corner, facing perpendicular to my street. Maybe it’d been parked there the entire semester and I just never noticed when I took that route home, though I don’t think that was the case. A mobile barbershop with the door closed and no audible noise coming from it is a visual too sketchy to miss. It must’ve been a more recent phenomenon. There were two barber’s poles painted on the back, and between them was a big Welcome label on a black box jutting out (an air conditioner perhaps?). The windows were tinted and covered with examples of hairstyle options, sort of like those bus advertisements where someone’s body is cut off right up by the window so it looks as if their head belongs to whomever is sitting at the window—but it wasn’t that much like this, the mobile barbershop wasn’t big enough for this to have been achievable, anyways.

Imagine you’re getting a haircut there and a car rams into the side, sending razors and disinfectant flying everywhere, as well as scissors lodging into people’s temples. You’re gonna walk out of there with scissors in your temples looking like a reindeer and that wouldn’t be good! I always pictured this happening while walking by; it’s why I never went, and why I’m not going if the mobile barbershop pops up on the side of the road again next semester. I don’t want to potentially look like a scissor-reindeer.

Mobile barbershops are useful; in fact I got one of my favorite haircuts at a mobile barbershop a few years ago. I went to a hardcore fest in Philly with my friend and the parking lot in back of the venue had food vendors, a vinyl flea market, and a mobile barbershop that’d come down from New Hampshire. They’d unpacked their setup from a U-Haul so it was a barbershop out in the open, except for one wall which had the mirrors and barber supplies. The transparency of the set-up and its presupposed Effiency swayed me to get a haircut on a whim. Plus, since it was in a large closed-off area, there wasn’t the possibility of cars driving by potentially ramming into it and sending scissors into my temples. I went from really long hair to really short hair; I startled my mom the next morning but she liked how I looked!

People are into openness and minimalism nowadays, which is why you have pop-up museums, food trucks, and mobile barbershops. They all promote transactional simplicity and spontaneity, in that you can be strolling through an area and decide to buy something because of its proximity out in the open. It’s a fantastic scheme. It doesn’t matter if what you’re getting is overpriced or if it’s a service that’s a little out of budget, like when I dropped $20 on the Philly haircut—what matters is that you’re taking part in Efficiency! I know I’m late to the conversation on Efficiency. Even though Efficiency is deceiving it can also be auspicious, like with me in Philly.

The next time I went long-to-short hair was a little over a month ago, and I was really happy with how that haircut turned out. But while I was scrutinizing that photo I took of the mobile barbershop on the corner, I realized that I actually got this haircut at the same place—since they also have an immobile barbershop, the kind where it’s in a building stuck in the ground, which was where I went. This is the big twist to my story! I’ve been dissing a large car without knowing that the large car belongs to a business I mildly appreciate. I don’t mean to diss the barbershop company overall, I just think mobile barbershops can be suspect, especially when I’m walking past one at night and the door is closed but it says Open and I can’t hear anything going on inside of it so it’s either well insulated or disconcertingly quiet in there for some reason. And the reason could be that no one wants to go in there, maybe because they’re all imagining the scissor-reindeer scenario, too.