The Life and Death of Spider-Man

How the news media got it all wrong. 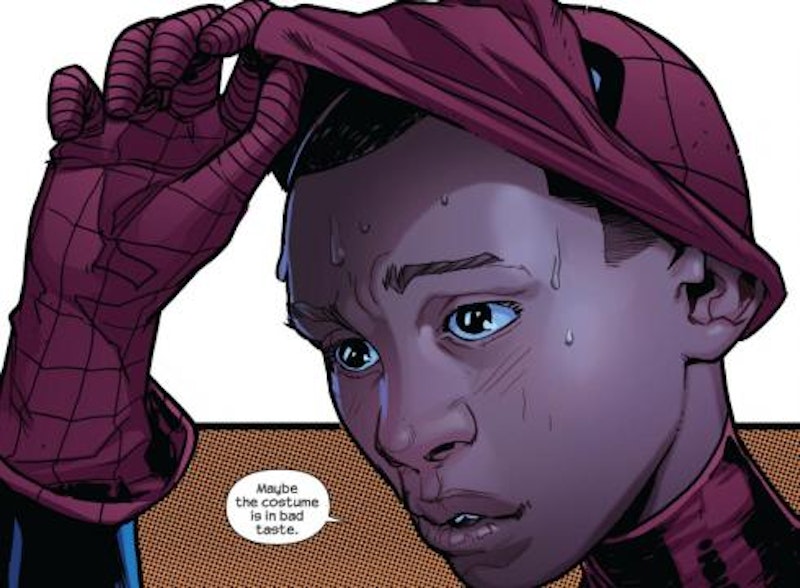 Except that’s not really how it goes.

Everyone’s familiar with Spider-Man, but a very small percentage of those people actually know the mechanics of Spider-Man as he operates within his native, comic book world. It gets complicated, but take a very deep breath: Spider-Man, as you probably know him, is fine.

Marvel Comics is noted for being a publishing company which produces stories that are grounded in realistic characters who happen to have supernatural powers, in contrast to DC Comics’ “superpowers that happen to be people” approach. After around 50 years of doing this, Marvel created the “Ultimate” universe in 2000 as a way to re-ground Marvel’s characters into their type of signature realism once again. This time, events would occur in a 21st century setting rather than be tethered by their 1960s origins. It’s important to understand that all of Marvel’s main characters exist in their alternate, “Ultimate” form in the Ultimate Universe, leaving the originals untouched. The Ultimates face slightly different situations and origins than their counterparts, and usually have different personalities. Thor isn’t a noble warrior god with a disabled, human alter ego, but instead a rampant egoist whose powers come from his fancy hammer. It’s a strange way of returning to realism, but let’s just run with it.

In this fashion, Ultimate Spider-Man is an analogue of the more familiar Peter Parker we’ve been reading about since the 1960s, but remember: Ultimate Spider-Man is still a different Peter Parker. Sure, a reader grows close to a character after reading 11 years’ worth of stories, following them through their surreal defeats and triumphs, but a vast portion of the outrage over a Latino taking over as Spider-Man did not come from Spider-Man’s most dedicated readers. Hardcore comic book fans have learned to adapt to change and the shifting realities that comic books embrace, while generally understanding that everything is cyclical.

So, yes, there’s a new Spider-Man in an alternate universe, and it’s a natural fit. Why should the ever-beleaguered Spider-Man always be white? Spider-Man’s alter ego is a guy who suffers through the worst that reality has to offer while still battling huge guys in rhinoceros costumes and goopy space aliens who live inside of his body. He has to deal with unemployment, an aging aunt, and his eternal nerdiness, and then go out and get his ass kicked by a guy who thinks he’s an octopus, and make it home for dinner. Why shouldn’t “being a minority” or “enduring racism” be a character trait of the downtrodden?

When Blue Beetle died in 2005, he was replaced by a Latino teenager named Jamie Reyes, and no one expressed this weird outrage. Blue Beetle has been around since 1939, and Spider-Man since 1962. So, it’s obvious that this anger not about longevity or preserving history. There’re at least a dozen examples of the mantle of a character being passed on to another racially different character throughout comic book history. Heroism is never, ever about what you are, but who you are.

Spider-man and most other comics have/had nothing to do with racism or racial subjects of any sort. To change his race for the SOLE purpose of appealing to non-whites, brings the subject of racism into the Spider-man universe. I have no problem with spider-man passing his mantle to someone of a different race, but the fact that it was done JUST to "get back at whites" is what angers me. It is reverse rascism. No, it IS rascim.
Except comics have a very long legacy of fighting racism. Anyone who thinks that the constant hatred levied against mutants in the Marvel Universe is actually about humans hating mutants is very wrong. It’s always been about the injustice of racism. To blindly presume that introducing a new, Latino Spider-Man into an alternate universe is an act of revenge is ignorance at its worst. You’re not a victim. No one is.

Amazing. Even screwing with Marvel's legacy, they have to appease the minorities and make them feel special. Sad.
Reuters got it wrong, as did many other news outlets—many of who can’t even hyphenate Spider-Man properly. They gloss over the fact that this is an entirely different reality, instead opting for the sensationalism of how Marvel is choosing diversity over history. This isn’t your Spider-Man, but it’s still pretty great to see comics continue to realize that stumbling into superpowers isn’t just for white people.

And Marvel? Issuing a press release about how diverse you are is dumb. It’s like walking into the middle of a room and shouting “I love the coloreds!” Not classy, guys.