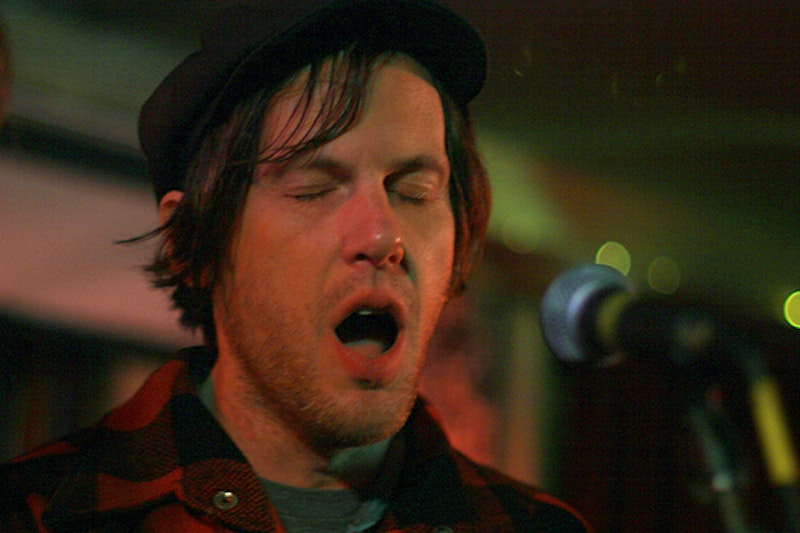 As a kid who stumbled into college at the age of 17 from a go-nowhere, be-nothing, pre-Internet forest town in upstate NY, the universe of indie music was thousands of miles from the fuzzy, Top 40 smooth rock classics I grew up with. Fumbling obliviously through the bins at Rhino Records was like trying to interpret an alien language in which there was no correlation between what I spoke and the characters, sentence structure, or even concrete concepts that it described. The commonality between what I’d always known and what was really out there was minimal, and in this way, exciting.

So, I bought whatever was on the posters in the windows. This is how I fell in love with Neutral Milk Hotel, which I later discovered were something of an indie music legend: mysterious, important, and probably dead forever. It’s that kind of brief flash of creative brilliance that I become obsessed with. Lead singer and songwriter Jeff Mangum subsequently retreated from the world for over a decade, only releasing odds and ends with other performers, or making surprise appearances. In this way, Mangum has always seemed a bit embarrassed of his success. He’s not a man who set out to construct a masterpiece, or a central touchstone for the spirit of independent creation and thought, but it happened. Maybe the burden of greatness was slightly too heavy to bear before the crowds.

In John Green’s teen novel Will Grayson, Will Grayson, Neutral Milk Hotel fans gather from hundreds of miles around to see a fictional NMH reunion show. Ultimately, it’s a hoax, and another layer of deep yearning and intrigue built upon the legend of the band, but I still wanted that to be me. I wanted to be in that audience, driving a long distance to watch an hour’s worth of music from a creator who had somehow made something very meaningful to me. I wanted to witness an important event in music history, and to exist in the same room as a thing that gave my own life a little more purpose, during a difficult time when purpose always seemed a little harder to find. So, a five-hour drive to Burlington, VT to see Jeff Mangum’s first tour date really wasn’t a difficult choice to make.

The show was held in a small Unitarian church—a kind of central location in Burlington, surrounded by wide swaths of grass and a garden, facing a few blocks of Starbucks and Urban Outfitters, just outside of Champlain College. It was appropriate for Jeff Mangum to make his formal return to the world in a church, and more significant that it was one that accepts every faith. For most of us there, myself included, this was the closest thing to a religious pilgrimage we’d ever make. We’d found a common faith in music and came together to casually worship its legendary creator. The tickets, handed out at the door, were a woodcut of an old woman holding three tiny girls in the palm of her hand. The church filled up with twentysomethings with burly beards, and skeletal indie girls, and people who spent a lot of time sculpting their bangs as carefully as possible and an inverse amount of time on the rest of their appearance. The accusation that Neutral Milk Hotel is only for indie hipsters was not disproved by the appearance of the audience, but I’ve never experienced a more orderly or respectful crowd. Indie hipsters, I salute your respect and reserve.

First were the Tall Firs, a duo who played sad, slow guitar songs, followed by Andrew, Scott & Laura (Scott Spillane being part of the original Neutral Milk Hotel quartet). Finally, almost three hours after the doors opened, Jeff Mangum wandered out on stage to check his guitars, and retreated into the back room of the church, followed by an enormous eruption of applause. It’s the kind of appearance where you’re not completely sure what you’re seeing: you don’t know if this person will look the same as he did in those old photographs on the Internet. Does Sasquatch have the same haircut that he did in those 1980s photographs? Will he look older?

Appearing in front of a huge arch of red light, a blacked-out ghost with a guitar, Mangum’s silhouette eased into “Oh, Comely,” urging people to sing along, and then sing louder. This was followed by the perfectly optimistic “In the Aeroplane Over the Sea,” and a mix of his most familiar, classic songs. By the fifth song, Mangum’s mic had tripped off, so after a moment of tinkering, Mangum grabbed his creaky, wooden chair and dragged it off into the audience to play a completely unplugged “Two-Headed Boy, Part 2.” As the audience moved up to meet him on the floor, gathering around this unpretentious guy that we’d never thought we’d get to hear live, everyone sang softly. No one sang louder than Mangum, allowing his honest and sharp voice to be heard above the rest, but the chorus of voices fit perfectly into the tall ceilings of the church. If I’ve ever had a religious experience, this was it. The awe was palpable. “God is a place you will wait for the rest of your life,” had new meaning.

As the show went on, Mangum played a majority of NMH’s two-album repertoire very faithfully, all on a selection of acoustic guitars, as well as an unreleased (but known) song, a B-side, and a Daniel Johnston cover, thanking the audience for their presence repeatedly. Mangum’s voice hasn’t changed since his earlier recording days. His ferocity on the guitar, and the cutting instrument of his vocals are as powerful as they ever were. Mangum’s own brand of Victorian surrealism has never seemed more alive and palpable.

A pixie of a girl up in the balcony gripped the handrail and convulsed, shaking and exalting on Mangum’s breathless and impossibly quick “Song Against Sex,” as if touched by some healer and her blindness was leaving her body, or her lifeless legs returned to mobility. It’s easy to forget that Mangum is just a guy, and seems like he never wants to be anything more than just a guy—but it’s really, really good to have him back.