Cut It Out, James Franco

Jack of all trades, master of none. 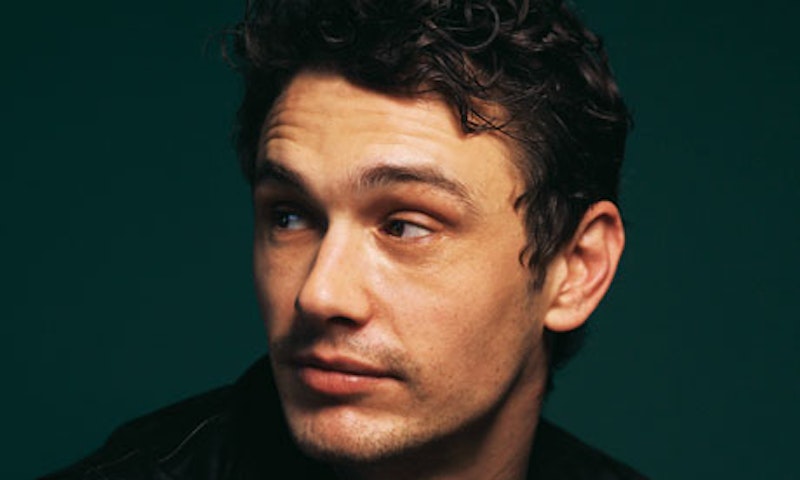 Wired magazine, which is normally a beacon of intelligence in an otherwise fetid pool of impotent print magazines, recently published a four page interview with James Franco. Unfortunately, it only contained a half-page of text which was creatively spread across one page in order to create the appearance of a real conversation. The rest of this space was consumed by sexy pseudo-science photographs and loud implications that James Franco could save the universe with his insights. He’s standing near test tubes, people!

Within this article, James Franco proceeded to criticize the morality displayed by a film of which he saw only half, as he slept through the ending. He concedes that there might have been a moral at the end, and the main character may have experienced his due comeuppance, but despite his lethargy, he did not recuse himself from commenting on something he did not actually experience.

“That’s our hero—this guy who’s going to make a lot of money. On the other hand, maybe that’s a great reflection of how our country operates. Granted, I fell asleep, so maybe they critique his actions a little bit in the end. But I don’t think so.”

Thank you, Wired, for allowing this signature bit of arrogance to fester on the page like a greasy, Franco-shaped fingerprint. I didn’t watch the end of The Life Aquatic with Steve Zissou, but things were looking pretty up after they saved Jeff Goldblum, so I’m pretty sure that everyone lived full, very much not-killed-by-helicopter-crash lives after that.

Now, permit me to recount an anecdote of an alleged occurrence at one of James Franco’s many college courses, as told to me by a friend of a friend:

A college professor was discussing the value of his class with students in a lecture hall. At one point in this lecture, he said something to the effect of, “Of course, you’ll be paying for this for the rest of your lives, if you can even find a job.” James Franco emitted a peal of self-satisfied laughter as the class turned and glared at him.

I hope, to my very core, that this story is true—and it doesn’t seem to fall outside of the realm of Franco’s never-ending supply of masturbatory appreciation of himself. Let’s just call it “fanfic” if it’s not. That’s legally permissible, right?

James Franco has taught a class about creating a documentary about James Franco - though I suppose that if one is going to teach a class, it’s wise to teach one about something one is passionate about. The oblivious, evidenceless gems don’t ever seem to stop clattering forth from his diamond mine mouth, though.

“Social media is over. Still up there. Going down. You heard it here first.”

No matter what Franco appears in, I can’t shake the image of him as the prototypical whiny bitch of Spider-Man: the over-acting, perpetual pout; the kind of spoiled rich kid who can do whatever he wants, who is a character which has manifested itself into Franco’s reality. The false self-deprecation, and the fact that Google cross-references “James Franco” and “douche” with over 600,000 results. In the interest of scale, Nic Cage only clocks in at around 48,000 hits, and he’s been around a lot longer. And has been known to wear a bracelet which connects to a ring via a silver chain. One might think that would be automatic infini-douche cred, but Franco has outdone him with impressive density. Glenn Beck? An unsurprising 1.2 million.

“Art films” about defecation and wearing face-phalluses are as old as the surrealist movement, Franco. You’re not doing anything new just because you’re James Franco. You strive to be a renaissance man, a casual polymath, and you’ve been quite vocal about your degrees, but what have you actually produced that is worth experiencing? When your own art teacher calls you an asshole, you’re either doing something very right or very wrong.

Fortunately, Franco seems to be the kind of person who will burn out quickly and go into hiding and spare us from his indifferent-yet-trying-so-fucking-hard squint. I’m hoping for a real life Joachin Phoenix scenario. I’ll graciously refrain from hoping he pulls a River. Too soon.

Maybe Franco is an ultra-modern, radically transparent Jack Kerouac, living his life to the fullest and documenting it loudly for the world to see while dramatically shutting down his Twitter account to prove that social media is dead. Maybe his whole persona is weirdly enhanced and made more deeply transparent by our celebrity worship culture. Perhaps he’s “running from one falling star to another” with the enthusiasm that only great wealth can allow and a short attention span can permit. But seriously, art school boy, you’re going to critique a film which you didn’t watch all of the way through? Go suck on a pumpkin bomb.