I once thought our popular culture had embarked on an unstoppable upward trajectory. 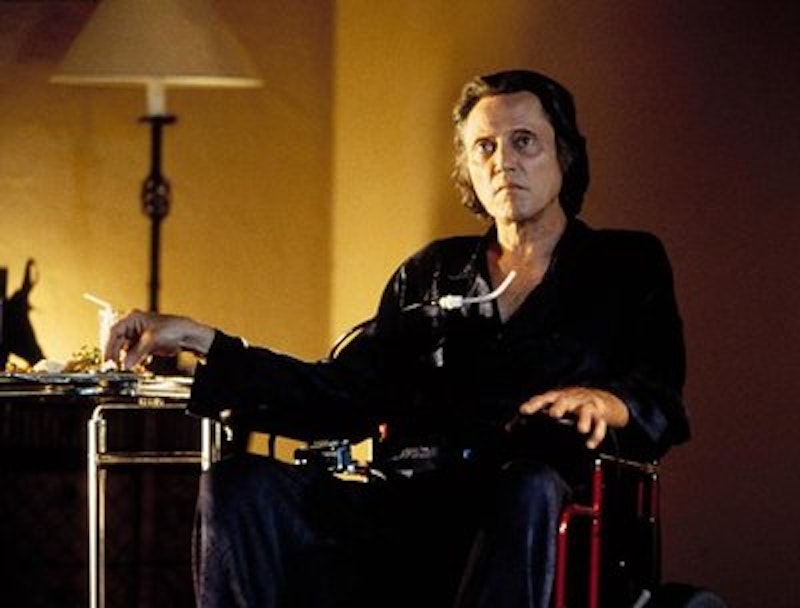 All of the secret things my Internet forum friends and I had misspent our pre-teen years uncovering were gradually entering the mainstream. The Butthole Surfers appeared on MTV, erstwhile Black Flag frontman Henry Rollins sorta-starred in movies, and the HBO sketch comedy series Mr. Show changed... well, everything about everything, unseating Letterman as the only source of humor with which I cared to engage.

This was a time of flannel, middle-part hairdos, shell necklaces, hard-soled Birkenstocks, and wide-legged pants—haute couture for a thick-thighed, round-faced boy with 4F-grade feet.

Then there were the movies: sex, lies, and videotape, Pulp Fiction, Fargo, Slacker, Public Access, and their ilk began showing up in the Greenville, NC rental stores, bearing the imprint of obscure film festivals and unfamiliar distributors such as Miramax and Lion’s Gate. My father began to rent these movies, sometimes because he wanted to get an eyeful of John Travolta but more often because he knew that festival labels were a useful heuristic indicating that viewers could expect intense, realistic scenes of sex and violence (in the case of The Crying Game, which we screened together on a dozen or so occasions, he had simply kept the VHS, choosing to pay the exorbitant rental-club fine in lieu of returning it).

I’d certainly watched good movies during the 1980s, though I was too young to think them so, but here it seemed the market had at last decided passive consumers deserved great films. It was alleged to be the 1970s redux, with the auteur again in his ascendancy, but I knew that era merely by reputation. If someone writing in Entertainment Weekly or Rolling Stone or one of the other magazines found in our car dealership’s waiting area had made that claim, who was I to dispute it? And why wasn’t I, by virtue of maturing when I began to mature, entitled to reside in a pop-culture nirvana (to which I was delivered, not at all coincidentally, by Nirvana rocking out on MTV Unplugged)?

The world had gone “alternative”; the vision of someone like Pee-Wee’s Playhouse set designer Gary Panter of an “avant-garde that... stocks the supermarket” had come true. “If you want better media, go make it,” Panter had exhorted fellow underground creators in his “Rozz Tozz Manifesto,” which he circulated in 1980. The vulgarity of “greed is good” capitalism could be turned against it, Panter reasoned. Good art wouldn’t just stand in opposition to bad art; it would outsell it. He promised a future without sitcom laugh tracks, a future in which he and others would redeem “the rubbery genius that was the Saturday morning of our youth” during the late 1950s and early 60s. “Capitalism for good or ill is the river in which we sink or swim,” he concluded.

I didn’t know about any of this, of course, yet I clung to the knowledge that I was cool, part of the “broader-based lunatic fringe” that Panter assumed would promote and buy the flourishing “antimedia.” Although I’d begun accessing this secret knowledge scant moments before it was disseminated widely, that was at least something (it wasn’t nothing!). A balmy stretch of ever-rising stock markets and a utopian internet betokened permanent progress; every product, performer, and pundit’s prediction promised to change everything, culminating in that silly Segway scooter released in 2001 that changed absolutely nothing except maybe guided tours and the policing of certain municipal parks.

But in retrospect, I should’ve recognized sooner that this would amount to so much sound and fury: a Generation X youth movement disdainful of “selling out” that nevertheless sold out so quickly that by the time it had ceded cultural space to its Gen-Z successors, those little be-your-own-boss babies had begun to think themselves as baby brands in a gigantic photo-sharing and video-streaming shopping center of the self.

In fact, I should’ve understood this while I was watching trash like director Gary Fleder’s Things to Do in Denver When You’re Dead, which was a dumbass, paint-by-the-numbers Pulp Fiction clone. I ought to have noticed the wheels of commodification at work: the movie’s title is borrowed from a Warren Zevon song, the lead actor (played by Andy Garcia, who made a hell of a career for himself applying considerable talent to hack projects) is named after somebody in a Bruce Springsteen tune, and the rogue’s gallery of character actors have clever quirks and goofy nicknames (the always-excellent Treat Williams is here referred to as “Fecal Bill” because... reasons).

Everything about the film was bad, and it was bad on purpose. Steve Buscemi and Christopher Lloyd were as good as they could’ve been in the service of jack squat, but who really cares? All of us viewers, I suppose, since the action unfolded almost entirely in blurry, dreamlike close-ups, again validating Orson Welles’ legendary disdain for that manipulative cinematographic trick. Andy Garcia’s can’t-win-for-losing antihero was doomed from the start, you see, but oh how he coulda been a contender.

And Panter, that divinely inspired creator of comics like Jimbo and the batshit crazy talking artifacts on Pee-Wee’s Playhouse, wound up being both right and wrong. The underground had infiltrated the mainstream, but this was nothing new or special: it had done exactly that with Dylan, with Bill Haley, with ragtime, with Elizabethan drama, and so on. But as in those cases, the underground hadn’t kept mutating and evolving; instead, it calcified into a world of commodified offerings that bore only a passing resemblance to their forebears. The real inheritors of the “alternative” mantle are Creed, Nickelback, Denis Leary ripping off Bill Hicks’ shtick, and the oeuvres of needlessly fast-twitch directors Guy Ritchie and James Mangold. They will all endure for at least as long as I do, reminding me that I was wrong, that young people are always wrong, that no one can teach them a thing.