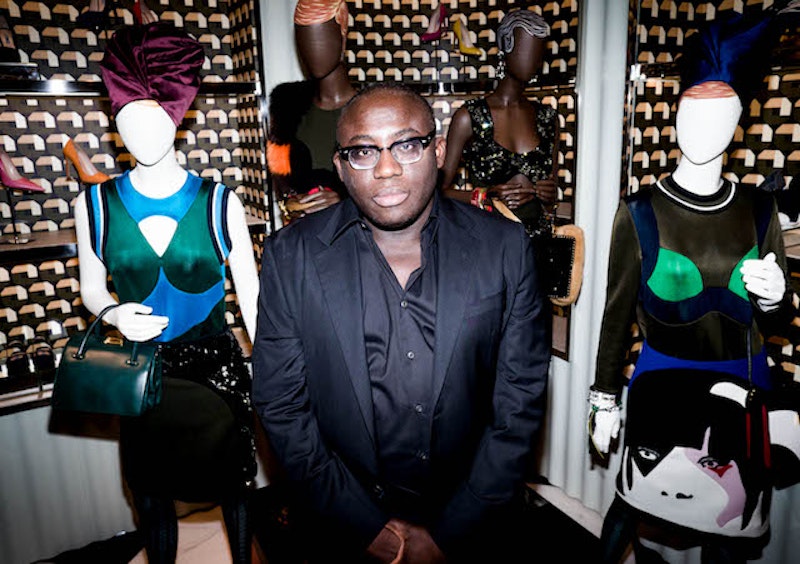 I gasped out loud and clutched my pearls when I read that Edward Enninful, a style maven who has worked at all my favorite magazines, from i-D and Italian Vogue to W, is the new editor-in-chief of British Vogue. What an exciting choice! When Alexandra Shulman announced she would be stepping down from the magazine after 25 years, up went the rumor mill with conspiracy theories about who’d replace her. Fashion loves musical chairs, especially when there is suddenly a juicy, high-profile opening at a megabrand. The most hilarious thing about the British Vogue opening is that the job was advertised on the Condé Nast career portal. I applied.

Born in Ghana and raised in London, Enninful is an inspired choice for the 100-year-old magazine, one Condé Nast Chairman Jonathan Newhouse described as "an influential figure in the communities of fashion, Hollywood and music.” He’s the first black, openly gay editor of any edition of Vogue, and it’s about damn time because as you know, fashion has a diversity problem, #lilywhite. I hope Enninful’s appointment is a hint that the new British Vogue will be more diverse and thereby more culturally relevant, but I also hope that the new tone is fresh, exciting, and edgy, all qualities Enninful has shown in his other editorial work.

There are so many things not to like about the fashion world, but one of the things I’ll always be crazy about are magazines, especially art and fashion magazines. I love the way they smell and I love risky covers, like this one. I love the way they look on a bookshelf and I love when there’s a good old sample fragrance in the pages. I never open the samples, only smelling from the outside.

When I lived in New York I used to go to Casa Magazines over on 8th Ave. and 12th St. and spent my graduate student stipend on fashion magazines, my version of critical theory. Some people pay for gym memberships, beer, or Grindr Xtra, but I go for French Vogue, my divas. Casa Magazines felt like home to me, a temple of pop culture, a crystal ball of the zeitgeist. If it was happening in contemporary culture, there was a magazine for it here.

Casa Magazines is one of the last kinds of magazine shops of its kind in NYC—probably even any city—not yet swallowed up by the whale of punishingly expensive rents. The place is tiny and barely fits more than five overeager fashion divas at a time, but what I remember most about going there was that it felt very much like a place of ambition. You’d always find some photographer, assistant, writer, fashion designer, artist, or smart intern there, and that meant Casa Magazines was more than just a “magazine store.” It was a place filled with dreams, reflected both in the pages and by the people who flocked there. When I was an intern at Interview I went to Casa to pick up an issue of the magazine because I loved seeing my name on the masthead. At the time I was a nerdy graduate student, nobody essentially, but there I was on the masthead of a magazine I loved so much. I felt like I made it; I was on my way.

Art, culture, and fashion magazines give us a window into the world and help us participate in culture—unrealistic beauty standards and body types aside. They show us books we should read, exhibitions we should see, movies we should go to, ideas we should know about, and in many ways they offer an idealized version of everyday life. Magazines are totally aspirational. They want you to think you can be your best, coolest self if you simply stick to their Editor’s Picks and must-haves.

As the first black queer editor of any edition of Vogue, Edward Enninful is now one of the most high-profile black editors in the world. I hope that black boys and girls will go to magazine shops and live in the dream world of high fashion editorials and fantasize about the day that they too could be at the top of the masthead.