Why They Suck: Beat the Meetles

The Beatles kept inflating rock ‘n’ roll until it popped. 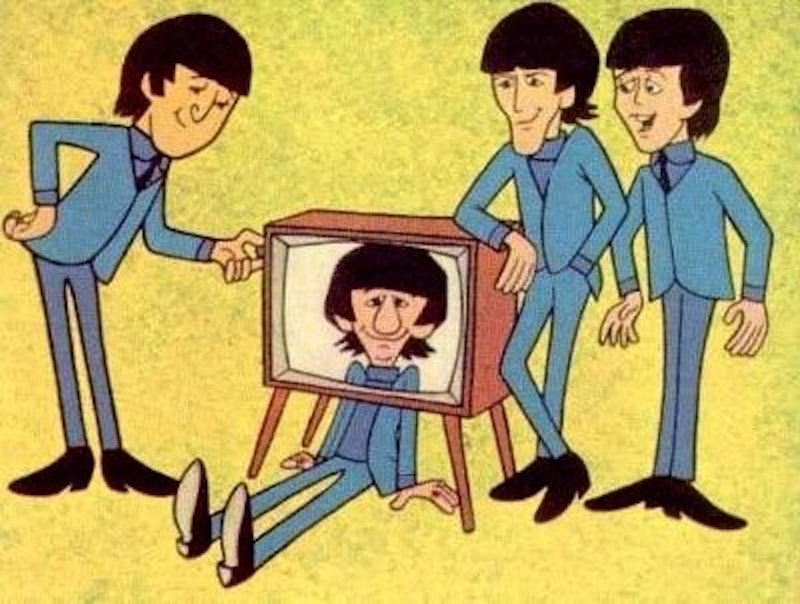 No pop musician can possibly pay off on the adulation accorded to the Beatles; in the face of their reception as transcendent, God-touched geniuses, as emblems of an entire era, as strange essences of our collective consciousness, the actual music is absurdly inadequate. Now, the idea of the essence of a generation or a zeitgeist pressed into the grooves of an LP is borrowed from modernist conceptions in the fine arts and elsewhere. One might think of the figures of Beethoven, Van Gogh, or Nietzsche, Picasso, or James Joyce: more-than-human forces of nature, transcendent geniuses who foresee the future and take us there by courtesy of the incredible roiling forces contained in their giant heads.

Starting out, The Beatles took American black pop music—"Twist and Shout," let's say—and stripped it down, cleaned it up, emphasized the big beat at its heart. The early Beatles records are about the best non-black or non-American appropriations of American black pop music ever made: incredibly clear and propulsive, and sung with a delightful tunefulness. The Beatles' image—whatever the reality—was of wholesome young men: non-threatening, charming. This was one reason they could appear everywhere in many media; for example, it was the persona projected in their movies Hard Day's Night and Help!

At their initial appearance, they were teenage-girl crush objects that even many parents could endorse or dismiss as harmless. And this essential wholesomeness continued as they got more hippie-like, grew out their hair, joined the peace movement, explored Eastern religions, and so on, though somewhat darker sides emerged as well. Still, in songs such as "All You Need is Love"—the inspiring yet empty soundtrack for a thousand treatments of hippiedom and the 1960s in a thousand films—they captured the positive side of 60s youth culture. Indeed, the Beatles always projected a certain childlikeness, and many of their songs fit seamlessly into the repertoire of a Raffi: "Yellow Submarine" (and its bright, happy animation) or "Magical Mystery Tour" were essentially children's songs, though mounted like mini-operas amidst a swirl of distortions.

The turn in The Beatles' style was gradual, though in retrospect relatively rapid (after all, their entire recording career lasted only seven or eight years). One might date it from Rubber Soul in late 1965, or Revolver in 1966. Certainly it’s fully realized at latest by Sgt. Pepper's Lonely Hearts Club Band in the middle of 1967. Here are some of the characteristics of the shift: a change away from a blues tonality to one that is European-oriented or perhaps British (McCartney associated the sound with British music halls of the 1940s); a shift away from basic rock instrumentation (guitar/bass/drums) to much more elaborate set-ups involving in some cases a full orchestra and experimental instrumentation such as the use of the sitar; a shift of lyric themes from dance-and-flirt to melancholy love and eventually to surrealist (“psychedelic”) poetry:

I told you about the walrus and me-man

You know that we're as close as can be-man.

Well here's another clue for you all,

The walrus was Paul.

Standing on the cast iron shore-yeah,

Looking through a glass onion.

Looking through a glass onion.

One could think of this development as a radical expansion of the vocabulary of rock music, or (as I prefer) an entire departure from it. In a Rolling Stone critics' poll, "Yesterday" was listed as the greatest rock song of all times, a claim which might be refuted on the grounds that "Yesterday" can't possibly be the best anything, but which is also certainly a category mistake; if "Yesterday" is a rock song, I am the Walrus. At any rate, the Beatles' turn produced some charming moments and some lovely melodies, such as "Norwegian Wood" or "Across the Universe," but I propose to you that it delivered bargeloads of meaningless hoo-ha: much of their production from Revolver to Let it Be is absurdly overblown yet utterly trivial. Picasso's Guernica or Joyce's Ulysses, is one thing; “Being For the Benefit of Mr. Kite” is something else again. And I think that the shift was a disaster not only for the artistry of The Beatles, but also for the whole genre of rock music. In one way or another, we must hold The Beatles partly responsible for the soulless anti-rock of, say, Elton John or Billy Joel, and for the pretentious yet empty art-rock of bands such as Yes or Emerson, Lake, and Palmer.

Here’s something that’s certainly a bad idea: Take a bunch of fairly average lads and their good pop band and abase yourself before them as though they are messiahs (Lennon: "We're bigger than Jesus." They were, but that wasn't their fault, or Jesus'; it was their audience's.) Several things will occur to such lads: that whatever we are, we cannot just be a slightly-better version of Gerry and the Pacemakers or the Dave Clark Five; that we must, in spite of all appearances or anything that could be revealed to honest self-reflection, be world-changing artistes. So we had better get busy making art: something that in some way sustains the reception or makes it comprehensible. And such a reception invites an immense self-indulgence: the idea that virtually anything we think of, our merest whim, our littlest jingle or nursery rhyme, must be world-shatteringly excellent. The shattered world has seemed to support this absurd assessment from 1966 right up to the present.

I’ll admit that there are elements of taste that are irremediably subjective, and I’m not going to make you hate Sgt. Pepper merely by asserting that it sucks, though it does. And I also admit that it’s a bad thing to insist that artists of any variety or quality must merely repeat themselves, that they must always do what you first liked them for doing. And of course, no one should be forced to do what some critic thinks they ought to do; The Beatles had a perfect right to make whatever music they wanted, and people have a perfect right to like it. But let me also point out that once you have heard a song a thousand times, it sounds like an inevitable classic. You may associate it with important moments in your life, for example. Once every documentary of the 1960s features Beatles songs, even people who hadn't yet been born will associate the music with the era. We are stuck with The Beatles in a way that makes a real assessment of their achievement next to impossible. Nevertheless, the assessments that’ve been made of their late work are absurd.

The Beatles started as classicists, and soon went through mannerist, baroque, and rococo stages of aesthetic decadence. I think that one reason for their break-up—whatever women, drugs, or ego-inflations were involved—was that they had reached an aesthetic dead end; there was nowhere else their actual talents or direction could take them. Soon they would’ve been writing symphonies and fantasias and operas, and then their artistic limitations would’ve been even more excruciating in relation to their ambitions than they were already.