Don’t Hang Up Your Wig Yet, Alec

Much needed political satire in the Trump era. 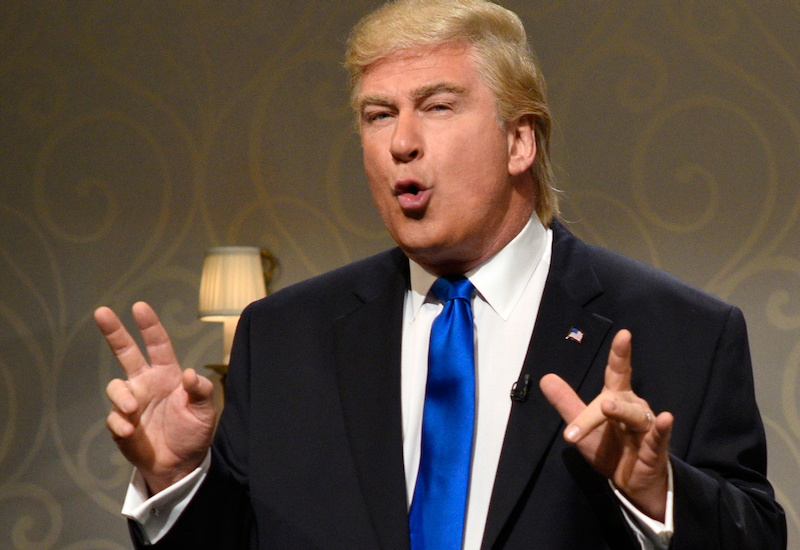 It’s been going around that Alec Baldwin is thinking of stepping away from his wildly popular Trump impersonations on Saturday Night Live and, in fact, last week he was quoted saying he’ll probably retire as the show’s chief commander-in-chief at the end of this television season. No doubt Baldwin has other interests and commitments. But I hope he won’t step too far away from his Trump impersonation, or if he does, that it won’t be for too long.

The run of political sketches on SNL that began last fall with spoofs of the pre-election debates and have continued into this first quarter, are the first genuine political satire I think I’ve seen in my lifetime. I’m a year older than Baldwin himself, which is to say that the first political event I remember was the assassination of a president. Lenny Bruce was before my time, and I grew up thinking Tom Lehrer’s That Was the Year That Was political satire. (Actually, it was probably closer to social satire.)

In the last six months, though, the political sketches on SNL have revealed what satire actually does: that it expresses what can’t be expressed elsewhere—because reality has become so bizarre, so far-fetched, that putting it into words seems futile or impossible. It’s not fear of acknowledging the truth; it’s a dumbfounded sense that reality beggars description. Satire gives us a reality check, acknowledging that what we think we have perceived is in fact what’s going on, even if nobody’s talking about it. Satire also gives us an outlet for whatever toxic feelings (rage, helplessness, desperation) are born of our inability to express indignation. It’s a silence, not unrelated to the silence that has always surrounded certain kinds of physical and sexual abuse—mysteriously to those who have never experienced them—where the victim cannot proclaim what’s going on because it seems too implausible to be true.

Lest anyone think me partisan or naïve, I hold no brief for Hillary Clinton. I hated her before anybody else did. I invented hating Hillary. But in a political landscape peopled mostly with liars, villains, and thieves, she would’ve been business as usual—perhaps just a little bit more so. But no one with any grasp of reality could’ve predicted that Trump would become president. No one can credit the degree to which his campaign platforms have proved to be pure fiction. No one can believe the spectacle of a president who cannot be shamed because he has no post-infantile frame of reference, who can’t function in a professional capacity because he makes no distinction between reality television and real life.

A few months back, Sophia McClennen, a Penn State professor writing for Salon, pointed out that Baldwin has been impersonating a president who is already impersonating a president. She also noted that much of the power of Baldwin’s Trump derives from the fact that the actor really doesn’t exaggerate very much. Both of those things are true. Both also, I think, place Baldwin’s Trump in the realm of something that’s become increasingly potent in American popular culture and increasingly present on the New York stage. It’s really what Hamilton is all about: a kind of performance, a new sort of drag (meta-drag?) where it’s not only obvious that the performer isn’t who or what they’re pretending to be (the traditional female impersonator) but where it’s actually important. It’s the antithesis of identity-casting, where only a black actor can be permitted to play Othello, only a deaf actress Helen Keller. In New Drag, an audience’s knowledge of the ways in which an actor isn’t like the character he or she is portraying injects a moral element that wouldn’t exist otherwise.

It’s important that you’re watching a man play Olivia to the Malvolio of an actor who’s famously gay. It’s important that you’re watching a woman playing Brutus or Falstaff, or watching someone who could never have been a Founding Father playing a Founding Father. It’s important that you’re watching an actor who has himself played a crude, blustering buffoon, who has courted a reputation for outspokenness and occasional belligerence, playing a commander-in-chief whose crudeness and infantile behavior aren’t an act at all. In meta-drag, the audience’s certain knowledge about the performer’s gender or sexual preference, background or ethnicity, character or past illuminates the text in unexpected ways, contrasting with the illusion to which we fitfully succumb (I’m watching Trump; Stephen Fry is Malvolio; this is just a story about Alexander Hamilton). In this way, the performance raises questions about reality, truth, and fact: whether those are all the same thing and if not, what that may mean.

Of course, no small part of SNL’s current genius for satire belongs to the show’s current head writers, Sarah Schneider and Chris Kelly, who along with the actors have created Baldwin’s Trump and Kate McKinnon’s Hillary Clinton and Kellyanne Conway, and envisaged Sean Spicer as a walking tantrum (in the person of Melissa McCarthy) and Stephen Bannon as The Grim Reaper (Mikey Day). They've picked up on everything, Trump’s sense that he can say anything—anything at all—and not be held accountable (because it’s really just all a big performance), as well as the traits that emerge in his spasms of spontaneity: the ignorance, the crudeness and small-mindedness, the lack of any sense of how he appears to others, and the total apathy about it; the tantrums, the lack of interest in a world outside himself, the complete poverty of what passes for knowledge, information, or experience in his own mind.

That being the case, could we make do with somebody else’s Trump impersonation? There’s no shortage out there, and some of them are good.

Actually, the best Trump impersonator I ran across is a comedian named Anthony Atamanuik. (He’s so good that Comedy Central has given him a pseudo-late-night talk show that debuts later this month). Like Baldwin, Atamanuik has down the squint, scowl, and pout, the hand gestures, the voice and accent, and speech mannerisms. But Atamanuik has also perfected the walk (like that of one who has just wet himself), the preening, the standing swivel, the standing strut, the down-turned grimace (risus non sardonicus) and open-mouthed preamble to speech, the furtive glances down (to check if his penis is still there?), and the total lack of breath control.

Atamanuik is spoofing Trump as a person and as a chief executive. What Baldwin has been doing on SNL is something different: he’s spoofing Trump as a performer—and that’s important, because it attacks Trump in the only arena he cares about. Trump sees himself as a showman, a media star. Of course, he’s neither. Baldwin, who’s both, uses his actor’s instinct and sensibility to spoof the ineffectiveness of all the things that Trump is doing for effect. One reason it’s so satisfying is that Trump has proved to be impervious to every other form of criticism. He doesn’t care what people think. Another reason Baldwin’s Trump is so satisfying is that he consistently employs a virtue that is alien to Trump: restraint.

Baldwin has said that he worries that by the time the new television season starts up in September people will no longer want to laugh about Trump. My guess is that we’ll need satire all the more.