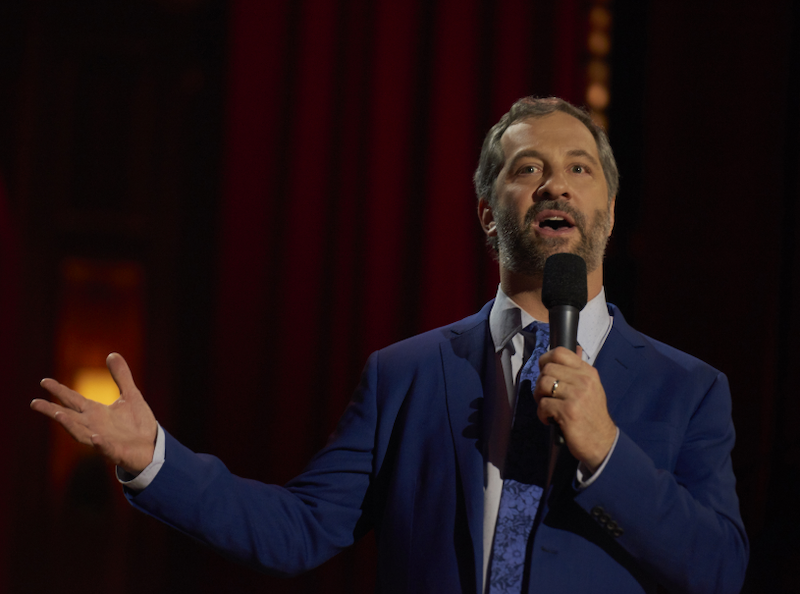 Judd Apatow used to be a stand-up comedian. Now he’s got an act again, or at least he’s doing a Netflix special. Watching Judd Apatow: The Return, you’d think, first, that the moviemaker had been doing stand-up for 25 years. Second, you’d think that he’d never had an original idea and that some inspired partner had put together Funny People, Knocked Up, and the rest.

The one element that pans out as expected is Apatow’s manner. He’s a shambling, droll, refrigerator-sized goofball who could hold a conversation with a driver or a studio boss. He’s likable. But his 69 minutes of stand-up drift by with only one joke that’s a grabber, this being his observation that an erection is a guy’s chance at feeling like a superhero. The rest is dad stuff and celebrity anecdotage, all of it passable. He does the bit about embarrassing your daughter by flipping up your shirt because her stomach’s showing. That’s something I’ve seen on Facebook.

A plus is that Apatow does good voices: Elmo, Cosby, Barack Obama. And he shows us photos of meeting Obama and Paul McCartney. These illustrate the accuracy of Apatow’s stories about bumbling around the great—witness the look of dismay on Paul’s face when offered Apatow’s email address. Toward the end of the show, Apatow namedrops Adam Sandler. The applause takes a while to arrive; at last a pregnant silence gives birth to a slow ripple. Sandler’s name is not an occasion for joy these days, not even on the channel with his movie deal. An added factor may be that the audience had sat through more than the usual amount of show. To get 69 minutes of assured-looking stand-up, perhaps a good deal more had to be shot and then edited down. This question is too inside for me to settle, but the laughs do seem skimpier than normal for a pro showcase, as if they were struggling past some extra factor. Or maybe the crowd found the material tepid.

Also on Netflix. Guardians of the Galaxy Vol. 2 is Guardians of the Galaxy dug up from the Pet Sematary. The first movie was a blast; this one’s a headache. Consider the opening title sequence. Rocket (Bradley Cooper) insists they have to set up the stereo because Peter (Chris Pratt) likes it. Since when does Rocket oblige people? Peter didn’t ask him to set it up, the idea just occurred to the little guy. I guess now his life is to help, that’s all. Except that he lies to Drax (Dave Bautista) right in that same scene—there’s some business about him winking with the incorrect eye, and Drax sees him and catches him in the lie. This sets up the next scene, where Rocky gives an unfortunate wink in front of some touchy aliens.

And the business with the stereo sets up the film’s title sequence, where there’s a big fight and Baby Groot dances through it unscathed. That’s why Rocket was busy with the stereo. The title sequence had to have a 1970s pop tune, like the one Peter danced to for the titles of the first film. Peter could listen to a Walkman, but for Baby Groot there’s no device small enough. Screw character, Rocket did what he had to do.

This movie of the damned, of galley slave characters and reconstituted fun, has one moment with a kick. This is the cold open, before the title sequence. Flashing back to Iowa in 1980, we see Peter’s future parents on their way to procreating. They’re good-looking and dumb. Life is a hamburger under blue skies, and they’re driving toward it in a shiny car. Another 70s hit plays, this one “Brandy,” and Peter’s mom-to-be (Laura Haddock) sings along with the car radio. She’s terrible, and she and her man both think she’s great. Because of them galaxies will shift. Meanwhile, the fella—he’s also an interstellar being called Ego (Kurt Russell)—has been using his blow dryer. I like that combo.