Dispatches from the War on Christmas

Another year, another right-wing meltdown over Starbucks. 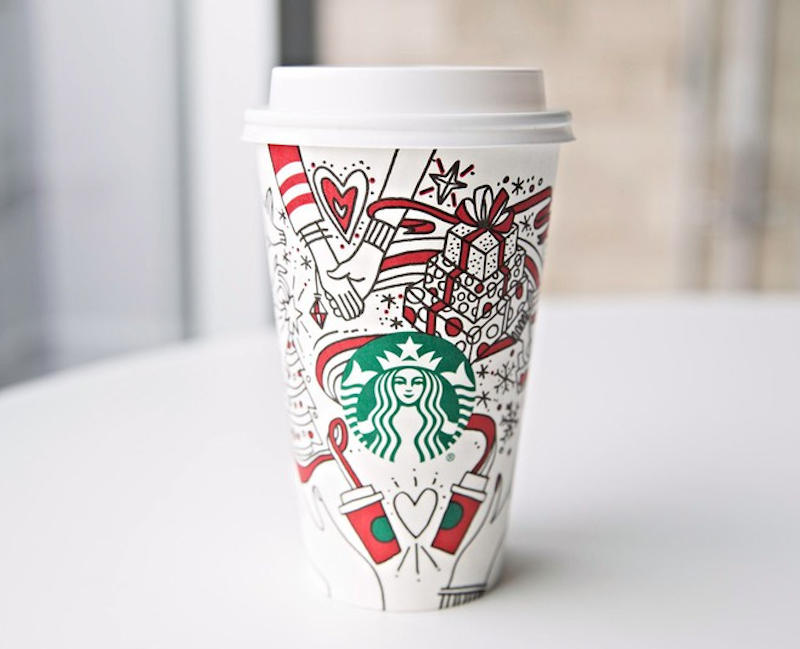 It’s time, again, for Starbucks’ War on Christmas. This year they put a pair of mitten-covered hands holding each other, and several right-wing Christians think those hands belong to a lesbian couple. It wasn’t the religious right that first concocted this bizarre theory; it comes from a BuzzFeed article suggesting that the hands on the cup are the same hands of a lesbian couple shown in an ad Starbucks released shortly before unveiling this year’s design. Therefore, according to fundamentalist Christians, Starbucks’ new attack on Christmas is to indoctrinate America into believing that non-heterosexual love is just as valid as heterosexual love. And as a queer trans person, I’m all for it.

Interestingly, the Freedom From Religion Foundation has a new quiz that tests people’s knowledge about the so-called War on Christmas. It turns out the person we can thank for this annual bigoted buffoonery is car manufacturer Henry Ford, who first wrote about the problem in a series of 1920s articles called The International Jew: The World's Foremost Problem. According to Ford, “Last Christmas most people had a hard time finding Christmas cards that indicated in any way that Christmas commemorated Someone's Birth. People sometimes ask why 3,000,000 Jews can control the affairs of 100,000,000 Americans. In the same way that ten Jewish students can abolish the mention of Christmas and Easter out of schools containing 3,000 Christian pupils.”

The John Birch Society continued this tradition in 1959, warning society about the United Nations removing any mention of Christmas in department stores across America. So there you have it: the Jews control the world, and they’re coming for your Christmas trees.

Historically, it was actually the Christians, not the Jews, who first waged war against Christmas. In 1659, the Puritans of Boston banned Christmas because they felt it was a distraction from spiritual matters. Proof once again that Puritanism is the fear that somebody somewhere is having fun. Fortunately, American Christians began to realize Puritanism was sucking the joy out of everything, and eventually Christmas became a federal holiday in 1870.

Another fact: while many conservative Christians throw a hissy fit when a Christmas tree is referred to as a “holiday tree,” some fundamentalists think Christmas trees are heresy. According to Jeremiah 10:1-5:

Hear what the Lord says to you, people of Israel. This is what the Lord says: “Do not learn the ways of the nations or be terrified by signs in the heavens, though the nations are terrified by them. For the practices of the peoples are worthless; they cut a tree out of the forest, and a craftsman shapes it with his chisel. They adorn it with silver and gold; they fasten it with hammer and nails so it will not totter. Like a scarecrow in a cucumber field, their idols cannot speak; they must be carried because they cannot walk. Do not fear them; they can do no harm nor can they do any good.”

So if you really want to know who’s taking Christ out of Christmas, it’s Christians! But that doesn’t go over well with Trump voters, does it? No, it’s the liberal Jew-run media that’s coming after our nativity scenes and Christmas trees. Today, they can’t outright say “the Jews” and “the blacks.” They use coded language like “political correctness,” “tolerance,” and “multiculturalism.”

That way they trick supposedly classical liberals like Dave Rubin and Jordan Peterson into saying, “I know, right?” and therefore make everyone believe that right is left and liberalism is communism. I think I’m going to get a nice hot semen-flavored gay Zionist communist Satanist peppermint mocha. Heathens’ greetings!