Punks Against the Patriarchy 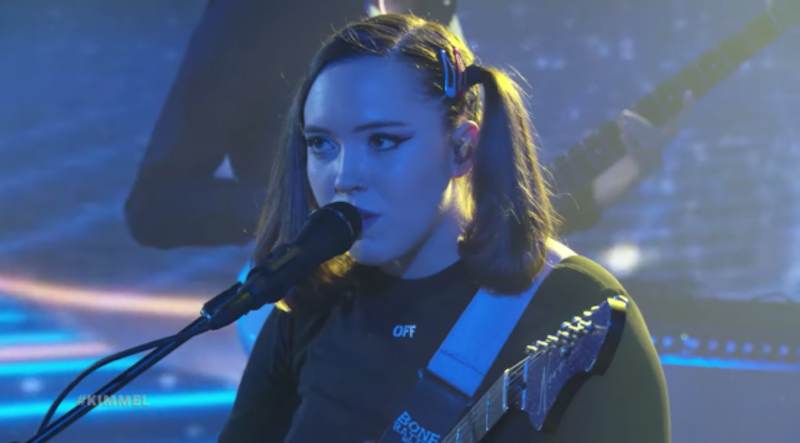 DC punk band Bacchae—whom I previously wrote about—is back with the new album Pleasure Vision, which has the same B-52s-meets-Sleater-Kinney sound they’re known for, along with confrontational lyrics. The album starts off strong with “Leave Town,” a high-energy song that slows down midway to showcase Katie McD’s vocals as she screeches, “I see the pupils of the beast always staring back at me!” The album’s sixth track, “Life Online,” is a critique of using consumerism to cope with reality. “I always want so much,” McD snaps, “and then I never need/I never feel so good/when giving into greed.” Another highlight is “Open Wound,” which tells the story of escaping an abusive relationship with a catchy pop melody and McD’s soothing vocals, throwing listeners off with this odd contradiction.

Sophie Allison of Soccer Mommy uses a similar juxtaposition with the lead single off her latest album, “Circle the Drain.” The music is catchy mid-tempo pop, but the lyrics describe a debilitating depression episode. “Hey I've been falling apart these days,” she softly sings in the chorus, “split open watching my heart go round and around/round and around/circle the drain/I'm going down.” The rest of Color Theory is a haunting record where Allison lays herself bare singing about mental health struggles, past relationships, and her mother’s cancer.

The songs “Yellow is the Color of Her Eyes” and “Gray Light” focus on Allison’s mom. The former is a seven-minute look into Allison’s mind as she tries to deal with her mom’s illness while touring overseas, knowing that one day they’ll have to say goodbye for good. “Loving you isn't enough,” she sings, “you'll still be deep in the ground when it's done/I'll know the day when it comes/I'll feel the cold as they put out my sun.” The album’s closer “Gray Light” sees Allison break down watching her mother get sick, ending the album with the haunting final lyric, “I’m watching my mother drown.”

After releasing a few EPs for half a decade, Beach Bunny finally released their full-length debut LP Honeymoon this year. The Chicago quartet has a pop-punk-meets-garage rock vibe that would please fans of Cloud Nothings and Snail Mail. Lead singer and songwriter Lili Trifilio sings about all the ups and down of love throughout the album’s 25 minutes, starting with the opener “Promises” where she thinks about an ex she both hates and still longs for. “Close my eyes but every time I try to rest,” she sings, “it's hard to think clearly, you live inside my head.” Other highlights are the piano ballad “Racetrack,” the power-pop “Ms. California,” and the closing track “Cloud 9” where Trifilio seems to finally be in a good relationship. “Even when we fade eventually to nothing,” she sings, “you will always be my favorite form of loving.” Expect great things in Beach Bunny’s future.

Imagine Fitz and the Tantrums meets David Bowie’s Young Americans, and you’ve got Meghan Remy’s music project U.S. Girls, whose latest album Heavy Light has been named by Pitchfork as one of the best albums of the year so far. It starts off strong with the lead single “4 American Dollars.” Over a funky disco beat, Remy critiques capitalism with witty lyrics and a soothing voice. “No matter how much you get to have,” she sings, “you will still die and that's the only fact/you gotta have boots if you wanna lift those bootstraps.”

The rest of the album follows suit with neo-soul rhythms paired with Remy’s observations about patriarchy (“State House [It’s a Man’s World]”), environmental issues (“The Quiver to the Bomb”), and old childhood friends (“Woodstock ‘99,” which has a nod to “MacArthur Park”). It gets dark with the final track “Red Ford Radio” where Remy pleads, “I can't breathe in this red Ford anymore/I'd do anything to get out” over heavy beats that makes the listener feel just as trapped. At first it comes as a sudden shock, but given the nature of some of the album’s lyrics—along with three spoken word interludes where people talk about their old childhood bedrooms, the most hurtful things people have said to them, and what they would tell their teenage selves—the darkness was always there lurking in the background, hiding behind the catchy melodies.