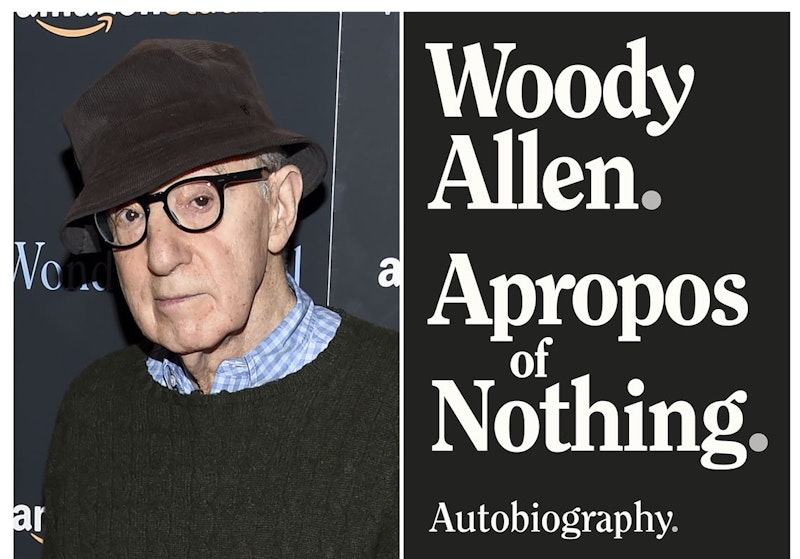 It’s the rapier, not the bludgeon, at The Washington Post copy desk. Wait, no. It’s the bludgeon. “If You’ve Run Out of Toilet Paper, Woody Allen’s Memoir Is Also Made of Paper,” says the headline. The article beneath the headline is a good match. Awfulness is a hallmark of Woody Allen. But he doesn’t own it. Monica Hesse, a Post columnist “writing about gender and its impact on society,” demonstrates this by providing 600 words of foot-stamping and nostril-huffing about Allen’s new book, Apropos of Nothing.

“Glad tidings,” Hesse begins her piece. “Thusly,” she starts a sentence. Watch out, she has a rant going, and rants are the clodhoppers’ idea of frolicsome, high-stepping prose. Ranting, Hesse says something untrue: “Some employees at Hachette, the original publisher of his terrible book, had an early inkling that it was a giant piece of belly button lint: this is why, earlier this month, they scheduled a mass walkout in protest of its publication.” Well, no. They protested the book because its author is allegedly a child molester: “‘We stand in solidarity with [Dylan Farrow] and survivors of sexual assault,’ read the out-of-office messages of Hachette employees participating in the walkout.” That passage is also from Hesse’s column, about a 100 words after the lint business.

Hesse tells us twice that Allen’s book is terrible, then decides to prove her case. “Do you like 400-page books in which wealthy 84-year-old Oscar-winning directors, who successfully navigated New York and Hollywood for half a century with unlimited creative control, who shaped mass pop culture into their own worldview, now portray themselves as innocent naifs who just can’t catch a break?” she demands. Timidly, I say I might. A look into that odd man’s mental space seems worthwhile to me. The book will have its awfulness, because that’s Woody Allen. But I’m curious and want to read it. Hesse is outraged that the book exists. Allen dares to remind us he’s alive, so she tilts back her head and ululates.

As she runs out of breath, Hesse gets down to the heaviest of her objections, namely that Allen makes some shocking allegations about Mia Farrow. Are these charges the reason that Apropos is a terrible book and not just a self-serving, lackluster book? You can’t tell from Hesse’s column. There are people whose minds, when angry, focus and become powerful. Hesse is some other sort of person. The same for the copy editor, or whoever’s behind the headline. As mentioned in the piece’s third paragraph, “covid-closed bookstores” are causing people to buy the book digitally.

Book nook. We’ve got one thing that sort of passes as almost a biography of Larry David. Really, it’s a Curb Your Enthusiasm fan book and most of it’s an episode guide. But the front half tells, in part, how Larry David got born and how he eventually made Curb. Because this section bears trace elements of biography, Pretty, Pretty, Pretty Good gets the following subtitle: Larry David and the Making of Seinfeld and Curb Your Enthusiasm.

The author is Josh Levine, who prepared by reading articles and watching TV. He’d better be very good at article reading and TV watching. But he appears just average, and his prose appears to have been written by accident. The author could’ve sat on a couch and felt his stubble grow and left it at that. But no, he had to produce a book, and he did so without raising his game from couch-sitting and stubble-growing. Larry David has no biography. Curb Your Enthusiasm doesn’t even have a decent fan book. Instead we have the book equivalent of a man scratching himself.