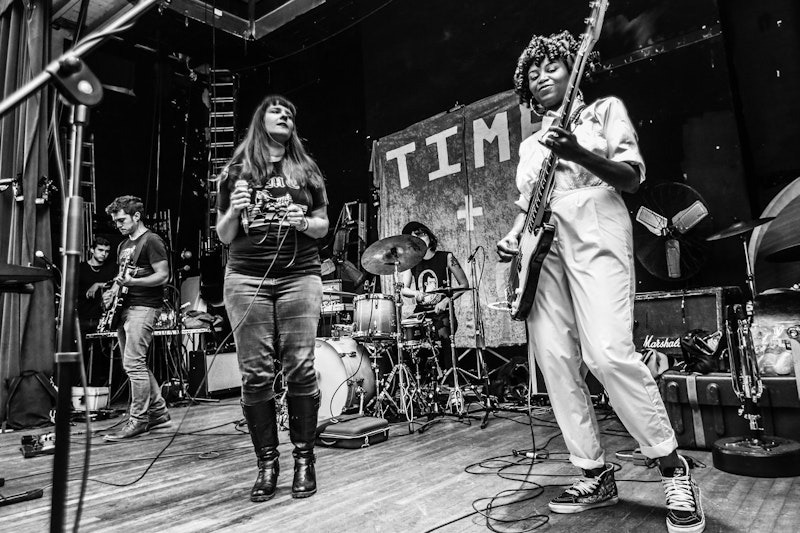 The DC punk scene may have died down after Fugazi’s 2003 breakup, but the nation’s capital is currently seeing a new generation of bands picking up where Ian MacKaye left off. One such band is Bacchae, who gives the #MeToo movement the riot grrrl soundtrack it needs. With their punchy guitars, catchy synth melodies, and Katie McD’s high-pitched vocals, Bacchae’s sound is more B-52s than Bad Brains. Under the music’s playful nature, however, lays a giant middle finger to the patriarchy.

Bacchae formed about two years ago with more passion than musicianship, which helped them develop their own sound. According to the Washington Post, drummer Eileen O’Grady wasn’t familiar with the B-52s at all until their fans said how similar their respective styles are. Whatever the band lacks in musicianship, though, they’ve got attitude, as evidenced in their song “Sour” from 2017’s debut album Down the Drain. The song claps back at every man who has ever told women to shut up and smile. “I’m done making lemonade,” McD responds, “I'm not content to let this go/I dare you to come pick my roses/land where poison ivy grows!”

The riot grrrl attitude continues on Bacchae’s recently released eponymous EP. McD startles the audience with “Prick” by declaring that she’s going to kill the man that hurt her friend. “In your thoughts he breaks you,” she sings, “but in my dreams we crush him.” “Read” is an ode to all the Sensitive Nice Guys who see woman as their potential Manic Pixie Dream Girls instead of autonomous human beings. “Read my lips, I’ll tell you now,” McD declares, “your words are sick; your face is foul/I think it’s time this asshole knew/I do not exist for you!”

As the band recently told the Post, “it’s impossible to not be political” because “[t]he world forces you to be political.” In the age of Trump, Black Lives Matter, and #TimesUp, one can’t be silent while fascism approaches America. Bacchae takes the “personal is political” message to heart by channeling their rage about sexual harassment and toxic masculinity into a musical force. Bacchae’s doing their part to keep the spirit of the DC punk scene alive in 2018.