The young have long been killing the old. 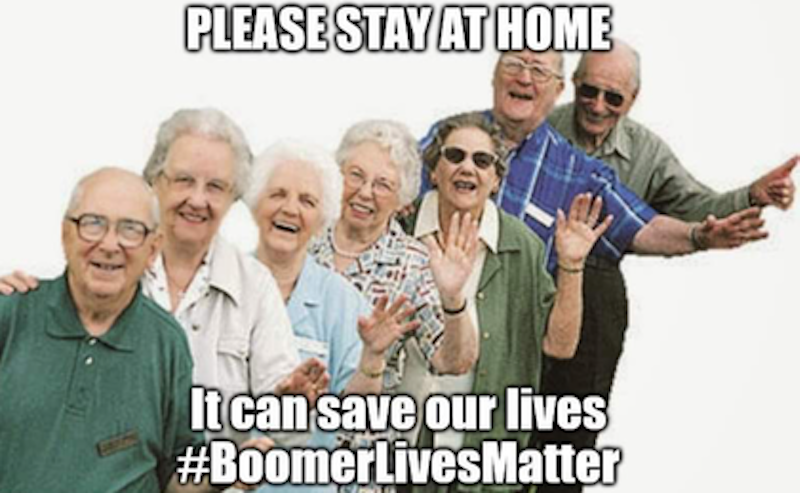 “The Ebola crisis, in my view, exposes the dysfunctionality of our healthcare system,” said Bernie Sanders, the socialist who wants to control your healthcare and nearly everything else via the federal government, at Sunday night’s presidential debate, intending to refer to the current corona outbreak.

Sanders, who like all current major presidential candidates is old enough to face extra risk from a respiratory-illness pandemic, may have stumbled into the truth by misnaming the current outbreak “Ebola,” though. After all, Ebola too is a virus that really can kill large numbers of people and deserves to be taken seriously and yet which produced a cottage industry of doomsday claims that turned out to be overblown.

Maybe many people never cared or now choose not to remember, but bookstores and movie theaters were filled from the 1990s onward with Ebola (or Ebola-inspired) pandemic predictions, endorsed by plenty of mainstream scientists, which kept coming back to the same core idea: Ebola is only found in dinky, developing-world villages now, but mark our words, if it ever reaches a major metropolis, it will be the end of civilization as we’ve known it. We’ll structure our future accounts of history in terms of pre-Ebola and post-Ebola eras, warned one health expert with the ears of many members of Congress.

Then, there were cases in the U.S. in 2014—even in populous New York City, a doomsday scenario if ever there was one, by the panicky crowd’s criteria—and barely anyone even remembers six years later, not even here in New York (it was in hipster-filled Williamsburg, specifically, so that’s two plagues for which you can blame that neighborhood). It appears that with ready access to developed-world medicine, and in patients not already weakened by malnourishment or other problems, Ebola is manageable.

Unfortunately, people are very night-and-day in their thinking. They’re strongly averse to thinking in terms of gradations, trade-offs, pros and cons, nuance, probabilities, economic costs and benefits—God forbid, even unresolvable uncertainty. So, as I learned in eight years of working for a public-health non-profit a few years prior to the tiny New York Ebola eruption, people prefer to think everything is either completely safe or utterly dangerous. Good or evil. Food or poison. The apocalypse or a complete hoax. They aren’t very good with in-between cases, where most of the universe happens.

The fact that I now urge remaining calm, being wary of government overreach, and keeping in mind that the number of people infected without knowing it may already be so large as to demonstrate that the real kill rate for the disease is lower than it appears will inevitably lead to some people thinking I’m one of those “If I die, I die—party on!” idiots we’ve been hearing about. I’m not.

In fact, like plenty of people more deeply involved in public health than me, I’ve been arguing for years that the much higher likelihood of the elderly dying from most respiratory illnesses than the young dying is an argument for the young being more sympathetic to vaccinations and other health precautions than some lately are and an argument for discouraging the longstanding custom of shaking hands. Germ-spreading, happy-go-lucky young people kill thousands of the elderly every year, and we usually don’t even think about it, let alone cry out for draconian solutions. That’s far harsher, albeit more stealthy, than Gen Z inflicting “boomer” as an insult on the retirement-age set. (I’ll assume only a few members of Gen Z are so nihilistic as to want the Boomers dead.)

I’ve made a few half-hearted attempts over the years to lead by example on the hand-shaking, but unless everyone has germs on their minds at the same time, you really look like an oddball (or hypochondriac, which I certainly am not) being the one person in the room trying to say—very quickly before confusion and sorrow crosses the other person’s face—“Sorry, I’m trying to break the hand-shaking habit because it really is one of the major causes of spreading colds! Nothing personal!” Maybe now the time has come, though.

But given people’s love of leaping to authoritarian solutions before they’ve even tried private, individual, voluntary, often far more effective ones, my renewed one-man crusade against hand-shaking will earn me no praise from most of the people freaking out over corona—though the disease so far appears (I say appears! I always welcome new data!) only about twice as deadly as ordinary seasonal flus, about which almost no one freaks out at all. I’m not saying that either the current wave of deaths or the usual annual wave is morally irrelevant. I just ask for consistency, which is usually the first step toward rationality.

Again, that doesn’t mean corona is nothing. I’m not even advising shrugging and ignoring lockdowns and event-cancelations the way another Splice Today contributor has recently, albeit with more careful thought and far more charts than the average bar-hopping apathetic lunkhead. After all, even if it becomes apparent we’ll all get exposed sooner or later, there may still be big gains for public health in merely spreading out the period over which it hits populations, to help avoid the very sudden wave of hospitalizations with which places like Italy have been hit (and which overworked acquaintances of mine working in places such as hospitals have been lamenting).

But I’d also advise remembering Ebola, as Sanders sort of almost did (though of course they are very different diseases, etc., etc.), and betting on our ability to bounce back from this quicker than some hysterics expect. Just as launching nukes is not the smartest, manliest, most “serious” response to every foreign policy problem, declaring martial law (which in some people’s minds seems to be bad if Trump does it but good and urgently necessary if Trump isn’t doing it), nationalizing industries, and outlawing travel is probably not the way to go here.

As always, don’t assume government action makes things better while markets make things worse (for instance, breweries have helpfully been mass-producing hand sanitizer in the current crisis, while government has for years been spewing red tape that makes home testing kits for various diseases harder to come by). Let’s at least try things like avoiding handshakes and not unnecessarily exposing the elderly to crowds before we leap to solutions more apocalyptic than the disease.

Indeed, if I were to rewrite the Book of Revelation today, instead of Pestilence, et al, I think I’d name the four horsemen Panic, Groupthink, Oversimplification, and Overreaction.