An interview with illustrator Danny Hellman in Believer Magazine. 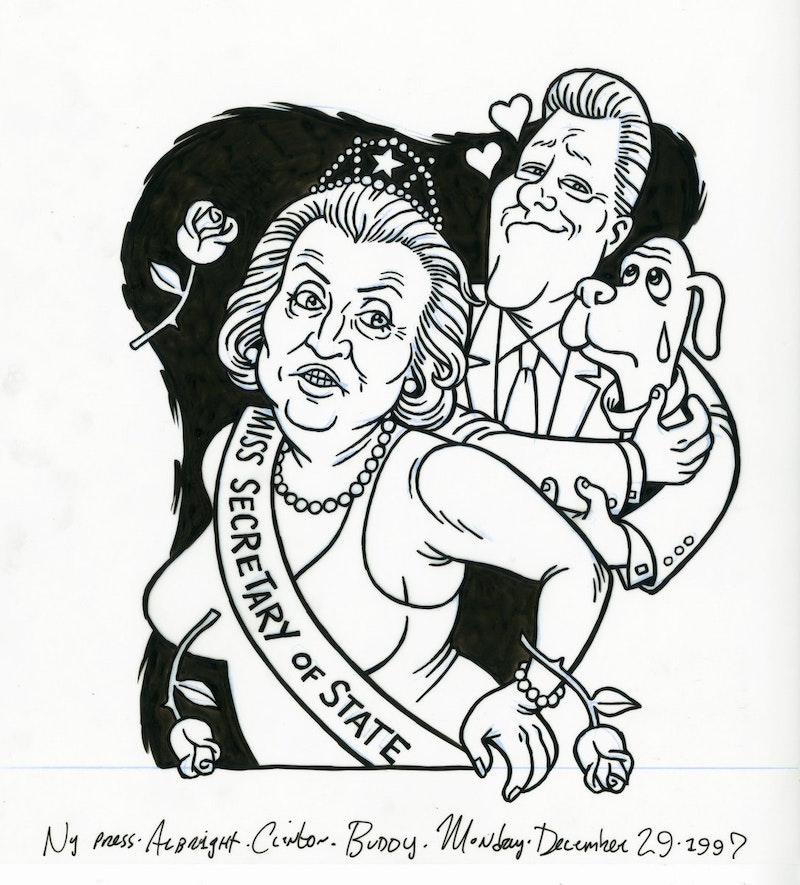 BLVR: This may or may not fit in with the idea of social media pranks, as it’s something you’re doing under your own name. I took a glance at your Twitter account. In an amongst selling prints and the like, you’re also very politically outspoken in a way that effectively twists the nips of people whose nips are in dire need of twisting. Are you intentionally setting out to aggravate people, or is that merely a happy side effect?

DH: Back at NYPress in the 90s, I drew dozens of virulently anti-Clinton illos for Russ Smith’s MUGGER column. I was in my early thirties at the time, pretty much a knee-jerk liberal who accepted as gospel that Democrats are always the good guys, while the GOP are the Great Satan. Understandably, I felt a bit of a traitor drawing Bill Clinton grinning sheepishly as he stood over a kneeling Monica Lewinski, or Bubba brusquely hitching his pants up after raping a distraught Juanita Broddrick, (mind you, I didn’t feel conflicted enough to turn the assignments down).

Now in 2020, my political thinking’s somewhat more nuanced, and I look back on those anti-Clinton illos with satisfaction, along with the realization that Russ was right about those crooks.

The political thoughts you see me expressing on social media are for the most part 100% heartfelt. The 2016 election was a real “through the looking glass” moment for me. I’ve never been a fan of Trump, and doubt that I’d ever vote for him, but I’d learned enough about the Clintons to see them and the party they’ve hijacked as a bigger problem for progressives than the GOP. My vocal opposition to Hillary Clinton in 2016 lost me friends, and I have no doubt my vocal opposition to whichever corrupt, compromised candidate the DNC nominates later this year will cost me additional friends.