The Bling Mac dropped off radar. 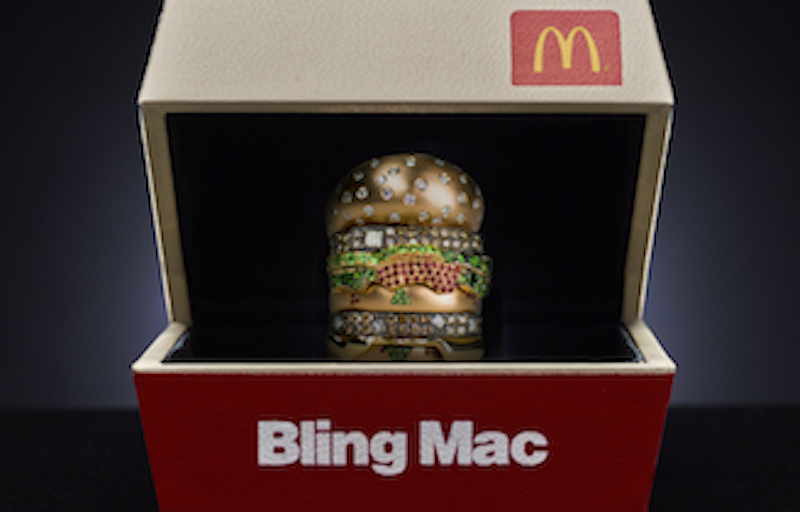 There’s something a little weird about the way McDonald’s “Bling Mac” poetry contest ended, not with the bang of a press release comparable to the ample media attention given the launch of the contest, but with the whimper of one brief, perfunctory form letter issued to one persistent customer begging to know who won.

Like many of you (I assume), I submitted a haiku back in February when McDonald’s Twitter feed was promoting the company’s plan to give away a hilariously gaudy bejeweled ring shaped like a Big Mac worth an estimated $10,000 or so to whoever wrote (and submitted via Twitter with appropriate contest hashtag) the best love poem to the Big Mac or one of the related variant sandwiches then being promoted.

My brief effort, in the traditional 5-7-5 syllables format, since you ask, went like so:

Submissions were due before Valentine’s Day and a winner expected to be announced by around the end of February. And then came the eerie silence. And then the flood of inquisitive tweets from applicants and observers (not from me, mind you—I’m way too cool, but I kept checking to see if anyone else had spurred McDonald’s to respond). In time, there was mounting confusion, frustration, despair, some anger.

Still McDonald’s maintained its stone-cold corporate silence. February ended. March ended. It sill hasn’t made a peep after a lot of hubbub over the contest back in February. The active, funny, and almost Wendy’s-like McDonald’s Twitter feed resolutely failed to respond to pleas for updates, whether cajoling or hostile.

I think the closest we’d gotten to answers when last I checked was a tweet from the enterprising Joel Kendall, who wisely followed old-fashioned rules on the company website (not that the other people were in violation) saying that McDonald’s contest winners in general can be learned via snail-mail inquiries. He claims (in a tweet on April Fool’s Day, adding slightly to the lingering confusion) to have gotten in return a form letter saying simply “Official Winner’s List: McDonald’s Bling Mac Contest: City/State: Robert Y, Forest Hills, NY; Prize: Custom-designed Bling Mac Ring and a check for $4,286; ARV: $14,286.”

He and others hypothesize that the winner was tweeter Robert Yee of Queens (Twitter handle @Afropostale), whose submission contained such memorable lines as “That day I grew up: no longer a boy/Gone were the days of 1-patty & toy.”

And that, it would seem, is that—and congratulations to Mr. Yee/Afropostale. But why the cover-up, a paranoid customer might ask? McDonald’s still hasn’t said on its website or Twitter feed that the legendary trinket has been awarded.

It’s odd, too, that Afropostale had not tweeted (aside from a couple retweets of other people) for five years prior to his prize-winning poem being tweeted out (unless perhaps McDonald’s has had him scrub years worth of potentially-offensive tweets from his feed before officially giving him the prize, which is certainly the kind of thing companies do these days). He has still, as I write this, only sent three non-retweet tweets in the past five years total, one of them apparently the winning poem. That’s a damn impressive tweet/reward batting average—but maybe Afropostale is just that good.

Or maybe the whole contest was an inside job and his rather minimalist Twitter account was created to funnel food-themed bling to a well-connected agro-crony in Queens. (I assume they have farmers out there, since it’s more spacious than Manhattan, but I haven’t checked.)

I don’t really want to rain on Afropostale’s parade or look a gift burger in the mouth while McDonald’s is trying to do something fun, but this is one of many little reminders in the past few years that companies are sometimes as distant and uncommunicative as governments—wrapped in red tape and legalese, crying out for some sort of “Vice President of Acting Like a Normal Human Being and Telling People What the Hell Is Going On,” who should be located right next to the office of “Vice President for Common Sense When the Usual Protocols Lead to Insanity.” These offices could replace the H.R. and legal departments, which are the source of most problems these days.

And you can’t just march off in a huff if you get annoyed at McDonald’s over the Bling Mac contest and think that the rival Burger King across the street will be straightforwardly apolitical and non-bureaucratic. Burger King has needlessly weighed in, quite adamantly, in the recent debate over “Net neutrality,” proclaiming a world without it to be as abominable as fast food-ordering under a system without “burger neutrality,” in which some people pay to get their orders faster and others must wait.

But of course, (a) there is no government-imposed burger neutrality rule, so it seems the market worked things out on that front just fine and (b) it actually might be awesome if you could pay more to expedite your burger order, and I think many rushed customers would be willing to try that system. Good idea, Burger King! Except that you’re against it.

I’d also be willing to pay more at theaters for better movies than for crappy movies, though somehow that idea never catches on. Regardless, the idea of the government decreeing which homogeneous pricing plan to use for all such purchases isn’t just wrong, it's psychotic. But then, the public—and most intellectuals—still haven't learned one damn thing about what price signals do. Some of those intellectuals haven’t even noticed a connection between the wage-increasing “Fight for 15” at fast food places and the sudden replacement of fast food workers by robots.

Maybe burger places should avoid politics and unnervingly cryptic contests—the excesses of government bureaucracy on one hand and corporate bureaucracy on the other—and just stick to fast food. That’s a noble calling, after all.

In fact, I know an economist from Italy who was inspired to move to the U.S. and eventually become a citizen by McDonald’s specifically, powerful symbol of American capitalism that it is. I asked her if she thinks the populist victories in recent Italian elections might nudge things in a more market-friendly direction, but she thinks little there ever changes and is happy not to have to deal with it too directly anymore.

It would be tragic if the U.S., like so many Old World nations, is becoming the kind of place where the lines are long, you’re on hold forever, no one expects answers from the bureaucracy, and the whole sclerotic system makes you think things just can’t work and it’s pointless to hope or try. Some of those Old World places looked to the land of Golden Arches thinking we’d found a way out of such paralysis, a system within which wild things are still possible and communication can still be clear, frank, and even brash.

Is it still the land of burgers and bling? Or will it become a quiet gray land in which the only audible voice is saying, “I’m sorry, I don’t know what to tell you. Fill out that form and maybe someone will get back to you.”