A retrospective in London. 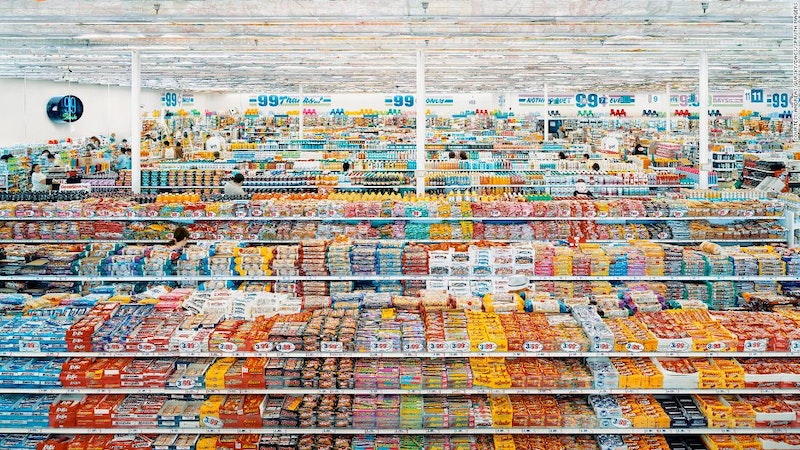 Andreas Gursky, the contemporary German photographer celebrated for his entrancing wide-angle images of the global economy, knows about drama. Over the past four decades Gursky has developed a precise visual language that brings wide angles, distance, expanse and focus to the forefront of encounters with images. His works, in a sense, are experiential—big, dramatic windows that seduce you into the frame. As you stand there engulfed by a piece like Paris, Montparnasse from 1993, for instance, a depiction of the largest residential building in Paris, you realize there’s a lot more fascinating detail in the frame than it seems.

I’ve long been a fan of Gursky’s unique visual eye—a statement style as recognizable as Warhol, Rothko or Mickalene Thomas. When I heard about his retrospective in London at the Hayward Gallery, his first in the UK, I dropped everything and headed to Southbank. When you live in a place as busy as London the hardest thing is making yourself go to all the things you’d like to see. Don’t let this be a show you miss, not if you enjoy the feeling of losing yourself in high-definition photography that’s broadly focused on architecture, space and the human experience.

Andreas Gursky is organized somewhat chronologically, starting from the artist’s earliest experiments with nature, distance and perspective before moving on to his broader concerns with global systems of capital and human synchronization. To look at a Gursky is to “see” everything all at once and yet nothing at all until you allow yourself to take in the details. Salerno I (1990) shows a harbor full of trucks, boats, shipping containers, and red, white and black cars. The shipping containers add layers of color, depth and perspective. It’s an image of industry, of industrial processes, and what’s mesmerizing about it is all the repetition. A sea of white cars gets punctuated by cute little red ones scattered throughout. For a busy industrial port, the image is absolutely still. Your eye creates the action as it starts to notice patterns in the image, dancing around to find new connections.

I stared at this image for a long time, getting up close but then taking 10 steps back so that I could breathe in the whole thing all at once. May Day IV (2000) shows a crowd at a rave in Germany—we don’t know where they are, we don’t see any lighting or special effects, but everyone is generally facing the DJ and seems to be having the time of their life. Some wear crazy outfits, some have their shirts off, but you can easily imagine the countless narratives that exist within the groups of friends that make up this pile of bodies.

What I liked most about the show was looking at people watch the images, and then watching people take pictures of people watching these soaring, bombastic pictures. These are pictures that capture the state of contemporary capitalism, with its drive towards automation as seen in Amazon (2016) and its emphasis on human synchronization. But they also reveal a great deal about the relationship between humans, nature, and architecture.

It’s fascinating because we take pictures like this on our smartphones all the time, especially when we fly. We love looking down from a plane at all the little houses, cars, and buildings, and always remark how tiny and insignificant it all looks. We take these pictures and throw them on Instagram. This reflects much about human nature and the use of space. There’s something human about trying to make sense of the world through pictures and a distanced perspective. These kinds of images help us understand systems, processes and what humans do.