The Dirty Secret of Apu Nahasapeemapetilon 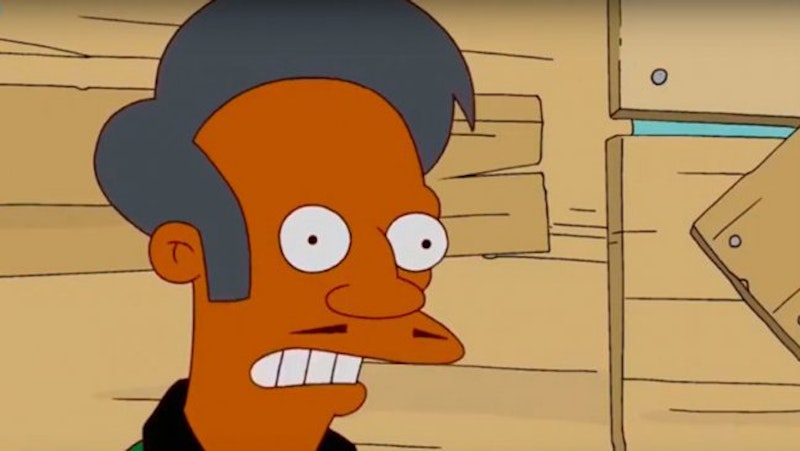 I think the white person’s response to the Apu business must be, “They caught up with us.” We knew that this character was against the rules. “He’s like Chico Marx,” I said to a friend sometime during The Simpsons’ seventh or eighth season. My friend and I, both white, had grown up watching the Marx Brothers, and Chico (“Hey, atsa right”) was a glaring example of what used to go and no longer did. That is, he was an example of pointing a finger at some race or ethnic group and making fun of it for being different. Chico would never be permitted in our civilized times. Yet there was Apu Nahasapeemapetilon, and didn’t anyone notice?

Yes, they did, as we have found out a couple decades on. Complaints are being heard and the show called to account. The Simpsons responded once, was criticized, and responded again. This second response is now being spat at by the Internet. “Shrug” is a word that comes up in the criticism, and the program’s latest comment does seem excessively wan. Mainly it takes the form of this back-and-forth between Lisa and Marge. “Something that started decades ago and was applauded and inoffensive is now politically incorrect,” Lisa says. “What can you do?” Marge (ruffled, would-be reassuring): “Some things will be dealt with at a later date.” Lisa (downbeat): “If at all.”

Vox says the program is shrugging at political correctness. I’d say the shrug is directed at something a bit off to the side, namely the prospects of anything being done after political correctness has raised its concerns. Something ought to be done: that’s why Marge is ruffled, and why Lisa’s weary “If at all” is the exchange’s punchline. But nothing will be done. Why not? Now here I find the show’s response a bit evasive. The episode focuses on a made-up piece of children’s literature, and this pretend book is shown being revamped so that its old-style ethnic stereotyping is replaced by worthy material about ecological causes and so on. More to the point would’ve been a funny cartoon character who’s a racial stereotype and then gets denatured into a non-stereotyped character who’s nothing at all. Examples dot pop culture in the years just after World War II. Chop-Chop and Ebony White—look them up and see the changes they went through. They were both worthwhile characters, Ebony especially, and then they weren’t, and the change happened because the racism was taken out.

Giving up a stereotype doesn’t mean loading in propaganda for worthy causes. It just means giving up a stereotype. But doing so hurts. That’s a dirty secret, and The Simpsons’ latest Apu response steers a long distance around it. The writers tell us that people hate being lectured. True, but the situation in this case is that people enjoy being bigots, often in hole-and-corner ways. They shouldn’t, of course. I won’t pretend I minded Apu—I loved the episode where he’s exiled from the Kwik-E-Mart—but I knew what he was and I’m just surprised that protest has taken this long to arrive. Now that it has, The Simpsons ought to smooth out the man’s accent, give him a suit and tie, and let him run a lobby group that raises the profile of fast-food workers and convenience-store personnel (the squeaky-voiced kid could be used to advantage). Make a joke of the denaturing, be meta about it. But denature we must. We keep saying the rules matter, and we know Apu’s  against the rules. He’s racist, we’ve had our fun, and it’s a fair cop.