The new Stranger Things season is a shopping trip down memory lane for 1980s kids. 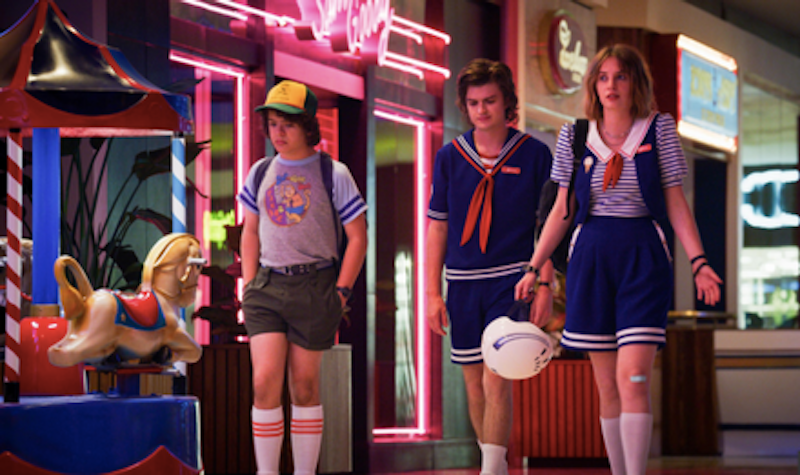 The title of episode 2 of the new season of Stranger Things is “Mall Rats” and if you’ve seen it, you know there’s a double entendre since there’s an abundance of the actual four-legged creatures in animated forms as well as teenagers at the fictional “Starcourt Mall.”

I grew up with a mall as my downtown. In King of Prussia, Pennsylvania, the mall was where we worked, socialized, shopped, ate, saw movies—it was home away from home. I walked there, through a cemetery and across train tracks and a major highway, taking the bus home some nights if I splurged. But the nation’s biggest shopping mall in the United States (measured in leasable space) was my childhood hometown, and particularly my teenage years. (I wrote once about how much it’s changed over time).

I’d seen Stranger Things previews depicting the mall, and wasn’t disappointed when the season came out. In general, from the rainbow sheets I had as a kid, to the slightly-outdated milk glass Bicentennial mug at the small-town newspaper office, to the Jazzercise outfits, the efforts the directors took to create an accurate time period are on point. But the shopping mall recreation is incredible in its attention to detail. Even the fictional “Scoops Ahoy” ice cream shop just reminds me of working at Friendly’s in my blue and white checked polyester dress during high school, right in front of a mall fountain just like they have in the show.

The mall in Stranger Things is a real mall in Georgia. There’s a “mall historian” who feels they did a great job recreating the mall for the series, evidenced in the fictional commercial popularly used as a trailer for the season that premiered on July 4. Honestly, in that linked mall article I’m not sure the “historian” has ever seen Stranger Things, but they wax on about the impact of malls on society (for some reason, yawn) and at least agree about the fictional commercial being spot on.

From the depiction of the Sam Goody’s, Waldenbooks and other now-defunct stores to the careful recreation of the vintage logos on the Burger King and JCPenney, the “opening soon” signs on the Taco Bell and the Esprit store, and other store shots like The Great Cookie and Wicks & Sticks accurately depict their original appearances. True nostalgia for any kid who grew up around a mall, regardless of your interest in the sci-fi show, which I happen to love.

Its setting feels like 1985 because it has been precisely recreated in a real-life mall’s abandoned section. For fictional Starcourt Mall, the real-life Gwinnett Mall in Duluth, Georgia interior vacant wing was renovated for Stranger Things. (After filming, the abandoned mall set was left intact for awhile but has recently been dismantled due to fans showing up). Executive Producer Shawn Levy told Entertainment Weekly:

“Everything you see in season 3 is real, which allowed for big, long continuous takes from outside to inside, etc. But if you walked 50 yards in one direction, there were actual real 2019 people shopping at contemporary stores. So it was very surreal.”

It’s surreal, but striped tube socks, Madonna-on-the-boom-box and all, I’m loving the realistic trip back to being a teenager.