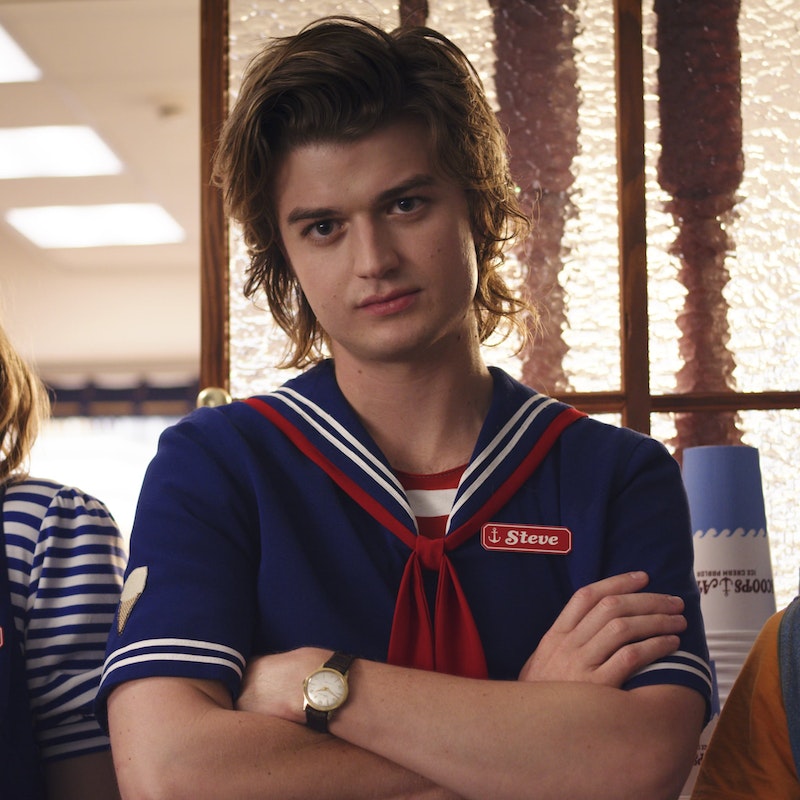 In high school I was a rolling fashion disaster and quietly terrified of girls. I read science fiction, got good grades, and stumbled through interpersonal interactions with a humiliating ineffectuality. I wasn't miserable; I had friends. Many people have worse experiences. But I wasn’t a social success.

My son is. He has friends of every gender. He's self-confident. He knows how to flirt, which is something I still haven't figured out. He cares about clothes, and dresses with flair. Whenever his peers vote for class representative or the equivalent, they vote for him. I'm not sure how this happened, but the truth is irrefutable. My son’s one of the popular kids.

Which is why Steve Harrington (Joe Keery) is my favorite character on Stranger Things.

Like most kid-focused popular culture, Stranger Things glorifies geeks, and outcasts—it's aimed, broadly, at people like me. The kids play Dungeons & Dragons and go to science camp. They're socially awkward (hyperbolically in the case of El (Millie Bobby Brown), who was raised in a lab). You root for them in part because they're underdogs. The mystic evil forces that threaten them are symbolic of a world that treats people like that with hostility and indifference.

The world doesn't treat Steve Harrington with indifference. He's got perfect hair, handsome and a star athlete. Girls love him. He's the life of the party.

There are some precedents for popular kid protagonists, but they aren't especially appealing. Ferris Bueller is a callous, smug asshole who treats his friends like crap. The male lead in 16 Candles has the personality of a doorknob, and connives in date rape. I don't want my son identifying with them.

Steve's different. He's popular, successful and cool, but also a sweet kid with his own quirks. He's not especially interested in science fiction or Dungeons and Dragons, but he discovers that he does really like kids. One of the funniest gags in season three involves all of high-school grad Steve's middle-school age friends coming to visit him at his ice cream shop job, much to the horrified bemusement of his nerdy co-worker. She has an encyclopedic knowledge of obscure films. But the bland pretty boy's love of babysitting is, it turns out, a lot weirder than the accepted niche geek passions.

Pop culture also often revels in popular kids getting their comeuppance. The adorable geeks like Peter Parker in Spider-Man: Far From Home always steal the girl away from the smooth operators. That happens in Stranger Things too; in the first two seasons Steve loses the love of his life, Nancy Wheeler (Natalie Dyer) to social outcast Jonathan Byers (Charlie Heaton). Rather than cheering for Steve's failure, though, the show treats him sympathetically. Steve really does care for Nancy; he dumps some of his friends when they mistreat her, and apologizes to her with real remorse. For his part, Jonathan, a camera buff, engages in some creepy stalker behavior. Nancy's choice of Jonathan isn't a sign of the true righteous virtue of geeks. She just happens to like him better.

Steve accepts that loss with a remarkable lack of bitterness. When his romantic overtures towards another girl crash and burn in season three, he rolls with that as well. He's high up in the social pecking order, but he isn’t callous, cruel or a bully. If you're a geeky kid, it may be comforting to see the popular kids taken down a peg. But when your son is one of those popular kids, it's nice to watch a show that doesn't treat good hair as incompatible with a good heart.