Along Came the Monterey Pop Festival

Flowers in your hair and love-ins? At 12, I was all in, at least notionally. 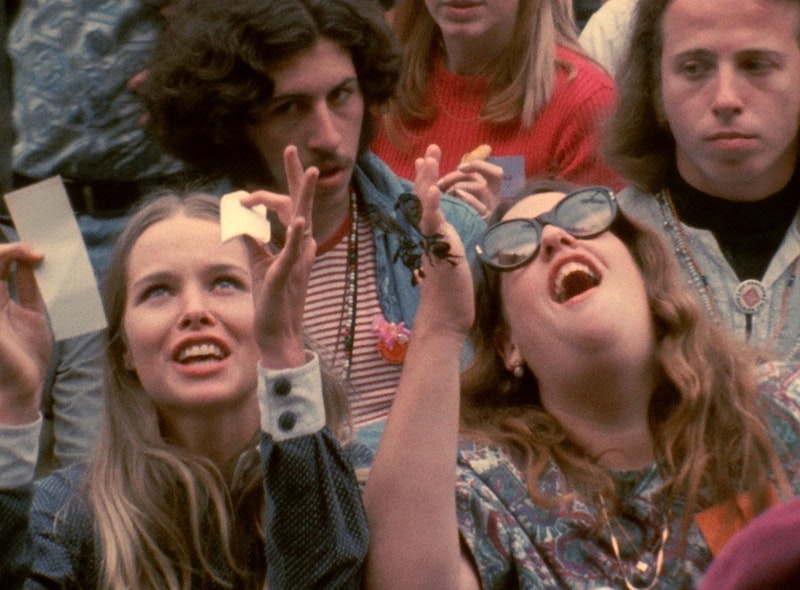 Once a month or so, at Splice Today’s modest office in Baltimore’s Charles Village, Commander Cody’s “Hot Rod Lincoln” comes up on the iPod and I call my son Nicky over to listen twice to the 1971 hit that never fails to put me in an 11th grade daydream, when, for a short period of time it was the air guitar song of buddies and me at the de facto outdoor smoking “lounge” at Huntington High School on Long Island. In the midst of that drab singer/songwriter era (Carole King, whose quintuple platinum breakout Tapestry was owned by every chick I knew; James Taylor and various siblings trying to cash in on their brother’s fame; Carly Simon; the droning Gordon Lightfoot; Cat Stevens; and many, many lesser lights) “Hot Rod Lincoln” was a snappy anomaly on the radio, a retro rockabilly song that made you feel pure and clean after King’s downer “It’s Too Late” and Taylor’s “Fire and Rain.”

I must not fuck with the “shuffle” feature, since the next song, while Nicky’s at my desk, is Scott McKenzie’s “San Francisco (Be Sure to Wear Some Flowers in Your Hair),” which was written by Papa John Phillips to promote the Monterey Pop Festival a few months later in 1967. I still like “San Francisco,” which floors Nicky, who said, “Dad, I thought you hated all that hippie shit!”

I didn’t: which isn’t surprising since I wasn’t yet 12 and the idea of a foreign land (California) and a “love-in” (a powerful if vague notion at that age) was very cool. Because of my four older brothers I was clued into music, AM and later FM, early on, but although they ruled in my mind, Dylan/The Beatles/Stones/Motown wasn’t all I listened to. The Easybeats, Beau Brummels, Little Stevie Wonder, The Cyrkle, The Young Rascals, Dave Clark Five, The Animals, Simon and Garfunkel, and even bubblegum music from the Monkees and Herman’s Hermits captured my attention. The Monkees’ TV show was silly (although I watched), but “I’m a Believer” and “Daydream Believer” were great, as were “Listen People,” “Mrs. Brown” and “No Milk Today” from the group my brother Gary dubbed “Kremin’s Kremits.”

The idea of “Gentle people with flowers in their hair,” would in Nehru-jacket speed, soon be mocked, but for a brief period it was all so wondrous, so foreign to a Northeastern sixth-grader, at a time when the Airplane and Doors exploded, Sgt. Pepper’s came out, The Beatles’ worldwide live “All You Need is Love” was their biggest TV event since the initial Ed Sullivan Show in ’64, and despite the riots shattering American cities and escalation of the Vietnam War, everything seemed possible. Gary spent the summer of ’67 in a mind-blowing European tour (sponsored by some Huntington organization, maybe our church or the Key Club), and upon his return brought home news that Stevie Winwood had left the Spencer Davis Group and formed Traffic.

I read a squib on the June Monterey Pop Festival in The New York Times, but this was pre-Rolling Stone (founded that fall), so details were sketchy, and it’s not as if the aging “Good Guys” on WMCA had a clue of what was going on. Later, it was revealed that the influx of teenagers and young adults to San Francisco resulted in a dirty city filled with junkies at the Haight, as George Harrison notably observed. He said, upon visiting that summer: “I went there expecting it to be a brilliant place, with groovy gypsy people making works of art and painting and carvings in little workshops. But it was filled with horrible spotty drop-out kids on drugs, and turned me right off the scene. I could only describe it like a Bowery: a lot of bums and drop-outs. Many of them very young kids who’d dropped acid and come from all over America to this mecca of LSD.”

(I didn’t get to San Francisco until I was 18, in January of 1974, and Harrison notwithstanding and the Summer of Love just an echo, I was floored. Palm trees! The Jefferson Airplane house and the Pacific Ocean! Fabulous Indian and Mexican food, and the mesmerizing Telegraph Avenue in Berkeley. City Lights bookstore! I bought a pair of huaraches and loads of bootleg Dylan records, and, at a time when cities were still peculiar with local eccentricities, I felt like a benevolent Martian.)

The double-CD of the Monterey Pop Festival still has interest to me, in a time capsule sort of way. Mama Cass is the star, rapping before the Mamas & Papas closed out the festival, singing “California Dreaming,” about the groovy stands where you could buy beads and the “good vibrations” floating in the air. After the song—she’d said the Festival would be held every year; it was a one-off, mired in acrimonious lawsuits, which the embryonic Rolling Stone reported on—she said, “Y’all are welcome to hang around. I think I might.” I couldn’t stand Mama Cass’ solo material, but was still surprised when she croaked in 1974, following fellow Monterey performers, Otis Redding, Jimi Hendrix, Janis Joplin, and four years later The Who’s Keith Moon. Turns out the story that she choked on a ham sandwich was apocryphal, but the jokes about that persisted for years.

Otis Redding had a lot of fun with the audience, laughing before singing “I’ve Been Loving You (Too Long),” and saying “We’re going to slow it down, ‘cause this is the love crowd, right?” People my age are prone to revisionism on when they were introduced to Otis: I’d heard “Try a Little Tenderness” on the radio, stored it away, but like most of my contemporaries the real awakening to his brilliance came with the posthumous “(Sittin’ on) The Dock of the Bay,” released shortly after his December, ’67 fatal airplane crash. A few years ago, perhaps on the anniversary of his death, a friend posted on Facebook that his sixth grade class heard the news and “we all cried like babies.” Okay! Just like me with Buddy Holly and Richie Valens in ’59 when I was three.